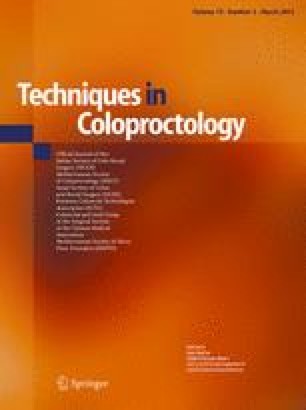 To demonstrate the utility of robotic approach to resect a large presacral mass.

The patient is a 76-year-old male with a large, 8 × 7 cm presacral mass identified on a CT scan. On patient history analysis, he denied any changes in bowel habits, abdominal pain, or any other obstructive symptoms. After discussing the possible surgical options, the patient was taken to operating room for a robotic resection of the mass.

For resection, a 12-mm camera port was placed at the umbilicus, and three 8-mm robotic ports and an additional two 5-mm were utilized for dissection and retraction. The peritoneal reflection on the right was incised and the retroperitoneal space entered. Once the posterior dissection was completed, the dissection was carried down both sides bilaterally, with attention paid to not injure the superior rectal artery or any mesorectal vessels. The pseudocapsule of the mass was surrounded during this dissection. The rectum was pushed forward and was thinned out from the constant mass effect. At this point, the mass was fairly mobile, the robot was undocked, a 7.5-cm Pfannenstiel incision was made, and the mass was extracted. A leak test was performed which was negative. Ultimately, the decision was made, for functional purposes, to give the patient a diverting loop ileostomy.

This case demonstrates the feasibility of the robot in the resection of presacral masses. It is useful especially in narrow, difficult, male pelvises.