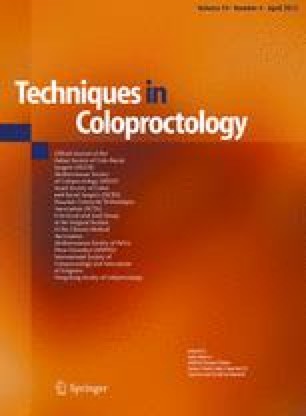 Trick of the Trade

A 22-year-old gentleman with a 7-year history of Crohn’s disease was conservatively managed by his physician. Subsequently, he developed abdominal discomfort and colonoscopy was performed. At colonoscopy, a stricture was identified at the ileocecal junction (ICJ) and the scope could not advance further. Stricture was serially dilated with a through-the-scope (TTS) balloon to allow successful terminal ileal intubation. A short segment of stricture was identified at the terminal ileum just proximal to the ICJ, and the more proximal portion of the ileum was normal. A biopsy was obtained which subsequently showed chronic inflammation and granulation tissue only. However, the patient’s symptoms did not improve despite dilatation and a surgical opinion was sought. Computed tomography (CT) enteroclysis was performed which ruled out other skip lesions and confirmed the colonoscopic findings of the short segment of stricture just proximal to the ICJ. Having obtained informed consent, minimally...