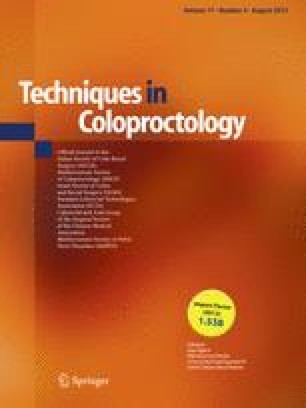 How I Do It

We describe our technique of low rectocele repair which is based on the approximation and lifting of the laterally displaced perineal bodies (PBs) using the Tissue Fixation System©, a 7-mm-wide tensioned macropore polypropylene sling. In low rectocele, the PB between the rectum and vagina is thinned and laterally displaced but still attached to the deep transverse perineal (DTP) muscle. Our technique is described with the aid of a video. The vagina and rectum are dissected off the laterally displaced PBs. The DTP attachment of each PB to the descending ramus is identified per rectum. A tunnel is created in the DTP on both sides to insert the polypropylene mesh attached to an anchor. The loop of tape between the anchors is shortened via the one-way system at the base of the anchor to elevate the inferolaterally displaced PBs to a more medial position. This is infiltrated by collagen over time, creating a “neo-central tendon.” The musculofascial layer of the rectum, the vagina, and superficial layers of the PBs are approximated. Our cure rate for low rectocele repair was in excess of 90 %, even with an early version of this procedure. Our method differs from rectocele repair with large mesh in that it precisely mimics the damaged structure and uses only very short thin strips of tape to approximate and reinforce PBs weakened by birth injury and age.

Peter Petros is the inventor of the TFS instrument and method. Hiromi Inoue has no conflict of interest.