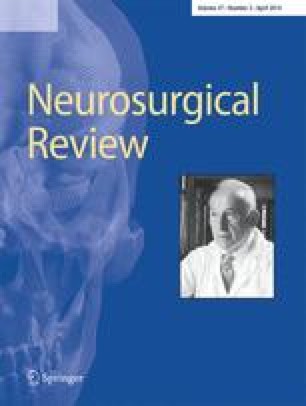 To review our experience over 10 years in endoscopic resection of third ventricular colloid cysts, describing the details of the transventricular–transchoroidal approach used in selected patients. This series included 24 patients with colloid cysts of the third ventricle treated in our department between October 2001 and January 2013 using an endoscopic approach. Clinical presentation, preoperative radiological findings, endoscopic technique employed, and complications were assessed in all patients. The mean length of patient follow-up was 5.16 years. The most common symptom was headache (75 %). The average size of the resected colloid cysts was 16.25 mm, the maximum diameter measured in cranial magnetic resonance imaging. Resection was transforaminal in 16 cases (66.7 %), transchoroidal in 7 (29.17 %), and transseptal in 1; macroscopically complete resection was achieved in 23 of 24 procedures (95.8 %). Complications included three intraventricular hemorrhages, four memory deficits (two of them transient), one case of temporary potomania, two soft tissue infections, and one meningitis. There were no statistically significant differences between the route of resection and number of complications. The Glasgow Outcome Scale at 1 year after surgery was 5 in 82.6 % of the patients. A transventricular endoscopic approach allows macroscopically complete resection of third ventricle colloid cysts in most cases. The option of opening the choroidal fissure (transventricular–transchoroidal approach) during the procedure can address third ventricle colloid cysts that do not emerge sufficiently through the foramen of Monro without increasing procedure-related morbidity.

Colloid cysts are a rare entity with an incidence around 2 % of all intracranial tumors. The different surgical approaches in treatment of this pathology range from shunting the concomitant hydrocephalus to freehand or stereotactic aspiration of the cyst contents. Microsurgical resection using either the transcallosal or the transcortical–transventricular approach was the operative state of the art over years. In the last decade, however, neuroendoscopy increasingly have been used for treatment of colloid cysts. In this paper, Dr. Ibáñez-Botella and colleagues give an excellent overview about the indications, operative technique, results, and side effects using the endoscopic transchoroidal and transforaminal approaches for resection of third ventricular colloid cysts. In their study, 24 patients underwent endoscopic colloid cyst resection, 16 patients were treated by choosing the transforaminal route, 7 by transchoroidal, and 1 by transseptal approach. It was possible to remove 23 cysts completely. However, there was a considerable number of complications. In my opinion, this is due to a more radical operative technique to achieve the complete resection of the cyst, which is actually not necessary. Even if there are some remnants of the cyst wall, the possibility of a cyst recurrence is rather unlikely (1). Another point of controversy in literature is the cyst contents. If the preoperative CCT or MRI shows hard contents or calcifications, the surgeon should be able to choose a suitable approach so that he can intraoperatively switch over from endoscopical to microsurgical technique (2). A time-consuming piecemeal resection is not appropriate and can create an aseptic ventriculitis. Finally, it is doubtful which size of colloid cysts can cause a sudden death, even cysts with a diameter smaller than 10 mm can do so, which raises the question, if a prophylactic cyst resection is indicated.

In conclusion, Dr. Ibáñez-Botella and colleagues show in their study impressively, that endoscopic approaches for resection of colloid cysts are standardized and represent a serious alternative to microsurgical techniques in the hands of experienced neurosurgeons. However, a competition between the two different operative strategies is not advisable, they should be complementary.