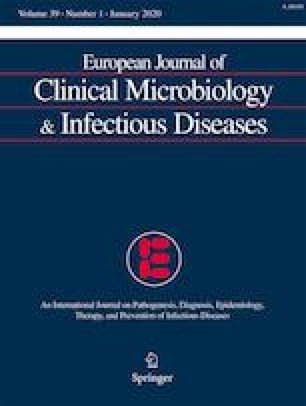 When Corynebacterium is isolated from blood cultures, the finding is often dismissed as a contamination from normal skin flora rather than recognized as a pathogen causing true infection. Studies investigating different cohorts have indicated that between 44 and 71% of patients with Corynebacterium bacteremia have true infection [2, 3, 4]. Some studies have only used a bacteriological criterion (≥ 2 positive blood cultures) [2, 3] whereas other studies also considered clinical features and acknowledge that intravascular devices are risk factors for true Corynebacterium infection [4, 5, 6]. The lack of a uniform definition of contamination and infection hampers the possibility to draw conclusions about the incidence of true Corynebacterium infections. Moreover, available studies describe limited number of cases and have a retrospective design [2, 3, 4, 5, 7].

Corynebacterium can cause infective endocarditis (IE) and is a rare etiology of such infections [8]. Knowledge on Corynebacterium IE comes mainly from case reports or systematic reviews of the literature. From a large systematic review it was concluded that Corynebacterium IE mainly affects the left side of the heart (95% of cases) and that men constituted 72% of described cases [9]. In this case review, 19% of cases represented valve prosthesis IE and the mortality rate was high (40%) [9]. Interestingly, a difference in clinical presentation between different species of corynebacterial was noted [9].

The present study aims to determine risk factors for true Corynebacterium infection, including IE, in a large retrospective population-based cohort of patients with positive blood cultures.

Data on patients with blood cultures positive for Corynebacterium were collected from the registry of the Laboratory for Clinical Microbiology in the county of Skåne, Sweden, for the years 2012 to 2017. A blood culture was regarded to be positive irrespective of if one or two bottles yielded growth. The laboratory is the only one in Skåne, a province with a population of 1,329,000 inhabitants (January 1, 2017, data from Statistics Sweden (available at https://www.scb.se), and all cultures from this province (including nine hospitals and all primary care facilities) are handled by our laboratory. From 2012 through late 2014, the BacT/Alert blood culture system (bioMérieux, Marcy l’Etoile, France) was used and was replaced by the BACTEC FX blood culture system (Becton Dickinson, Franklin Lakes, USA) in December 2014. The laboratory receives approximately 75,000 blood culture bottles/year of which roughly 12% grow bacteria. The isolates had been identified by MALDI-TOF MS and the majority of them were identified at genus level only. For the study, stored isolates were re-cultured on blood agar plates under aerobic conditions, and when sufficient growth was observed (at between 24 and 120 h), samples were analyzed by the direct colony method using MALDI-TOF MS (version Microflex MALDI-TOF MS, software FlexControl 3.4 and MALDI Biotyper (MBT) Compass 4.1, with MBT Compass Library, DB-7854 MSP (Bruker, Bremen, Germany). In cases where a low score was achieved, we also used a standard ethanol-formic acid extraction method described by the instrument manufacturer. The cutoff of 1.7 for species determination as suggested by Alatoom et al. [11] and also others [13] was employed. Resistance was determined according to EUCAST protocols, and breakpoints were defined according to EUCAST guidelines (available at EUCAST.org).

Medical records were studied retrospectively. Records inaccessible and patients under the age of 18 were excluded from further analysis. The regional ethics committee of Lund University approved of the study (2017/1002). An episode was defined as a clinical situation where Corynebacterium was isolated from blood and the episode was concluded after 2 weeks of effective antibiotic treatment. Thus, if Corynebacterium was isolated from the same patient within 14 days, this was regarded as persistent bacteremia whereas a positive culture after 14 days was regarded as a new episode. Data collected included age, gender, the use of immunosuppressive treatment, underlying medical conditions according to Charlson [14], and criteria for IE according to Duke [15]. Nosocomial infections were defined as an infection evident at 48 h or more past hospital admission. Focus of infection was defined by fulfillment of the following three criteria (i) the isolation of the relevant bacterium from the site of infection, (ii) signs and symptoms of focal infection, and iii) radiological signs of focal infection [16]. In-hospital mortality was recorded.

Definitions of true infection depending on the number of positive cultures

Description of the cohort

Four hundred twelve blood cultures with growth of Corynebacterium were identified in 369 patients with 373 episodes of bacteremia. Ten episodes were excluded because of inaccessible medical records and 24 episodes because of patient age under 18 years. This resulted in a total of 335 patients with 339 episodes in the final analysis. Thirty (8.8%) episodes were classified as true infection, whereas 309 (91%) episodes were classified as contamination. Characteristics of the clinical features of episodes are listed in Table 2. Both groups were predominantly elderly males with comorbidities. Corynebacterium was cultured (n = 6) or detected by 16S rRNA gene PCR and DNA sequencing (n = 3) from the site of focal infection in nine episodes in which four patients had IE, and one each had spondylodiscitis, joint prosthesis infection, septic arthritis, pneumonia, central-line infection, and urinary tract infection.
Table 2

Characteristics of patients with true infection and contamination

1Inter-quartile range. 2Includes three episodes of possible IE. 3Unknown focus or no infection. 4Not determined due to too few observations in some cells. 5Corynebacterium isolated at the site of infection

Identification and characterization of isolates

Two hundred fifty-eight of 339 (76%) isolates could be classified to the species level; remaining isolates had either not been saved or could not be recultured from stocks. The most abundant species identified in the episodes representing true infections and contaminations are given in Table 3. Corynebacterium afermentans was the most commonly isolated species in episodes representing contamination, whereas C. striatum was the most common species in cases of true infections. Despite its low frequency in the microbiological data set, four of seven episodes with C. jeikeium were categorized as true infection. The difference in species distribution between the groups was statistically significant (p < 0.0001 in chi-square test for difference).
Table 3

Microbiology of true infections and contamination

Eight episodes of bacteremia were regarded and treated as IE (see Table 4 for clinical descriptions). C. jeikeium and C. striatum were responsible for two cases each whereas C. propinquum, C. amycolatum, and C. pseudodiphtericum were responsible in one patient (of whom one had two episodes) each. In five cases, Duke’s criteria for definite IE were fulfilled, and in one patient with possible IE, FDGPET-CT showed strong uptake in relation to the valve prosthesis. Interestingly, all cases were valve prosthesis IE, of which six affected the aortic valve and six of seven patients were male. The time from valve insertion to the episode of IE varied from 4 weeks to 3 years. One patient died from the infection; one patient had a recurrent IE; and, in five cases, valve surgery was performed.
Table 4

Characteristics of IE caused by Corynebacterium

From our results, we conclude that the species of Corynebacterium is an important factor in determining if a finding is likely to represent true infection or contamination. Thus, the finding of C. jeikeium in blood is a strong suggestion of an underlying true infection whereas the isolation of C. afermentans strongly indicates contamination. We therefore suggest that clinical laboratories should determine the species of all corynebacterial isolated from blood so that clinicians can use this information to determine if a given isolate is a contaminant or relevant pathogen.

Corynebacterium IE has been described in numerous case reports but large case series or cohort-based studies are lacking. Our description of eight episodes of Corynebacterium-caused IE is relevant as it represents a population-based account of this type of infection. Interestingly, all cases were related to valve prosthesis and this is clearly more than reported in a large review of published cases (19%) [9]. The cases occurred both early after valve insertion and as late as 3 years after surgery suggesting that both intraoperative and hematogenous spread of bacteria occur. Our findings also demonstrate that the isolation of a Corynebacterium from blood in a patient with a heart valve prosthesis should evoke a strong suspicion of IE. Despite the potential severity of prosthesis-IE, the mortality was lower in our cohort (one of seven patients) than that reported from systematic reviews of case reports (40%) [9]. This might be explained by a tendency of clinicians to mainly report dramatic presentations of IE. As in previous reviews on the topic, we observed a male dominance in Corynebacterium IE. Despite that our cohort is comparatively large, it is still too small to draw definite conclusions about the role of different Corynebacterium species in IE. It can be noted, however, that C. amycolatum, C. striatum, and C. jeikeium constitute a majority of cases and these species have been described previously to be common in Corynebacterium IE.

C. striatum has recently been shown to possess virulence factors, especially in terms of biofilm production, which implies that favorable conditions for the bacteria such as venous catheters constitute a risk environment for the growth of this particular bacterial species [17]. Indeed, spread and adaption of certain C. striatum clones in hospital settings has been demonstrated recently [18]. C. striatum is also known as a causative agent of a wide range of infections and for displaying or easily develop resistance to many antimicrobials [19, 20, 21, 22]. Apart from IE and sepsis, C. striatum–related infections can arise from the respiratory tract, urinary tract, or wounds [23]. This is consistent with the findings in this study, where C. striatum was related to different types of infections.

The main strength of this study is that it is population-based and large. This allows for conclusions about incidences. Another strength is the combination of microbiological analyses and a careful analysis of clinical data which allow us to draw conclusions about the likelihood of different species to cause infection and contamination. The main limitation is that not all isolates were available for species determination and that there was a bias in which isolates had been saved. Isolates that the laboratory staff believed represented contaminations were less likely to be preserved, and this might have skewed the results from the species determination. The study was of course also limited by the retrospective design where only information recorded in the medical records were available for analysis. Despite that the study is population-based, of course, caution must be taken with extrapolation of the results to other geographical locations.

In conclusion, we demonstrate that Corynebacterium can cause severe infections and that species determination is an important tool to help clinicians in determining if a given patient has true infection caused by Corynebacterium. Therefore, we propose that microbiology laboratories should report the species of corynebacteria isolated from blood cultures.

We acknowledge the invaluable support by Mrs. Lena Hyllebusk at the Department of Clinical Microbiology. This work was supported by the Swedish Government Fund for Clinical Research (ALF), the foundations of Österlund and Skåne University Hospital, and the Royal Physiographic Society in Lund. Part of this work was presented as an abstract at the Swedish infectious diseases meeting in Jönköping May 2019.

All procedures performed were in accordance with the Swedish law on the ethics trial of research made on human subjects (SFS 2003:460) and were approved by the regional research ethics committee (ethics committee of Lund University, 2017/1002).