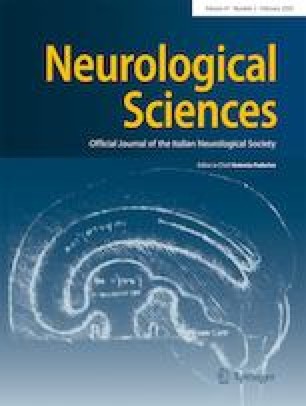 We retrospectively recruited 302 patients with transient neurological symptoms. According to DWI findings, they were divided into DWI positive and DWI negative group. The clinical characteristics and the TIA-related scores such as ABCD2, ABCD3, ABCD3I, Dawson score, and the Diagnosis of TIA (DOT) score were compared between the two groups. Logistic regression analysis and receiver operating characteristic curves were used to identify the independent factors and compare the predictive value of different TIA scores for acute DWI lesions.

Recently, the Diagnosis of TIA (DOT) score has been proposed [18]. It is a new and internally validated web and mobile app-based diagnostic tool which encompasses both brain and retinal TIA. However, as a promising diagnostic tool for TIA, DOT score still needs independent external validation before it can be widely utilized.

Thus, our study was aimed to investigate the clinical characteristics associated with the presence of acute DWI lesions in Chinese patients with transient neurological symptoms and tested the validation of DOT score in China.

We retrospectively identified patients with transient neurological symptoms lasting less than 24 h, who were admitted to the neurology department of Beijing Chaoyang Hospital, Capital Medical University from January 2016 to February 2019. All the patients underwent DWI within 5 days after admission. We used a 3.0-T MRI to evaluate whether acute ischemic lesions were present on admission. Sequences included diffusion-weighted, T1-weighted, and T2-weighted imaging; fluid-attenuated inversion recovery (FLAIR); and magnetic resonance angiography (MRA). Acute DWI lesions were defined by the areas of high signal intensity on DWI with restricted diffusion. All MRI scans were read by experienced neuroradiologists. Based on the results of DWI, patients were divided into two groups: DWI-positive and DWI-negative group.

The study was approved by the ethics committee of Beijing Chaoyang Hospital and performed in accordance with the Declaration of Helsinki. All subjects provided written informed consent.

Statistical analyses were performed using IBM SPSS Statistics 21. All statistics were presented as mean ± standard deviation (SD) for continuous variables with normal distribution, the median and interquartile range for continuous variables with non-normal distribution, and counts and proportions for categorical variables. We performed t test, chi-square test, and the nonparametric Mann–Whitney U test to compare the characteristics between the two groups. A P value of less than 0.05 was considered significant. Logistic regression analysis was applied to identify independent predictors of acute DWI lesions in patients with transient neurological symptoms. The results were presented as estimates of relative risk by odds ratio (OR) with a 95% confidence interval (CI). Receiver operating characteristic curve (ROC) analysis was used to compare the predictive values of various scores with regard to acute DWI lesions in patients with transient neurological symptoms.

We retrospectively recruited 302 patients with transient neurological symptoms who underwent DWI within 5 days after admission. DWI lesions were detected in 89 (29.5%) of the 302 patients. Table 1 shows the clinical characteristics of DWI-positive and DWI-negative group at baseline. The results of blood pressure on admission, the laboratory blood tests, the other examination, and the scores of TIA with the two groups are presented in Table 2.
Table 1

There were significant differences in gender, dysphasia, motor weakness, hyperlipidemia, smoking, alcohol drinking, systolic pressure, diastolic pressure, platelet count, FBG, and the severity of intracranial stenosis between the two groups. Besides, the DWI-positive group had a higher level of IMT of the carotid artery. Logistic regression analysis showed that acute DWI lesions were independently correlated with dysphasia (OR 2.226, 95% CI 1.220–4.062) (Table 3).
Table 3

In addition, we also found that most of the DWI lesions were located in the periventricular area, basal ganglia, and cortical and subcortical regions. Most lesions were diffused punctiform lesions or lacunar infarcts. DWI lesions were more frequent in the anterior circulation.

In our present study, our findings showed that DWI lesions were detected in 29.5% of Chinese patients with transient neurological symptoms. The clinical characteristic associated with DWI lesions was dysphasia. The ABCD2, ABCD3, ABCD3I, Dawson score, and DOT score were significantly higher in the DWI-positive group. The ABCD3I score was superior to all other scores, and the AUC of ABCD3I and DOT score were 0.83 and 0.63, respectively.

Additionally, our study also found that acute DWI lesions were associated with dysphasia, which was also in agreement with previous investigations [14]. To date, the diagnosis of TIA is mainly based on detailed history-taking, thus, the diagnosis of TIA can be difficult and 50–60% of patients seen in TIA clinics turn out to be nonvascular mimics [18]. This may explain why dysphasia is an important underlying factor to be focused on. Episodes of acute atypical or nonfocal neurological symptoms referred to as transient neurological attack (TNA) are as prevalent as TIA. It was reported that DWI showed acute lesions in 23% of patients clinically diagnosed as TNA by experienced stroke neurologists [23]. This raises questions about the accuracy of the clinical diagnosis of TIA. As a result, patients with dysphasia should be taken seriously.

Our result also showed that ABCD2, ABCD3, ABCD3I, Dawson score, and DOT score were significantly higher in DWI-positive group. Furthermore, DWI-positive group had more severe vascular stenosis and a higher level of IMT. In our study, based on ROC, the comparison of AUC showed the superiority of the Dawson score and DOT score compared with the ABCD2 score and the ABCD3 score. The Dawson score is a clinical scoring system that assists with the diagnosis of TIA [21], which was not designed for retinal and some posterior circulation events. The DOT score is a new clinical diagnostic tool for both brain and retinal TIA [18]. With the use of the Dawson and DOT scores, the diagnosis of TIA could be more accurate. It seems to be useful to predict the acute ischemic lesions on DWI with transient neurological symptoms. In addition, our study showed that the ABCD3I score was superior to all other scores. Therefore, the DOT score and ABCD3I score may play an important role in the diagnosis of TIA and assessing the risk of early stroke after TIA in Chinese patients.

The strengths of our study were shown as follows. Firstly, we investigated the incidence of positive DWI in Chinese patients with transient neurological symptoms and identified the independent predictors including laboratory tests and examinations for this positive DWI. Secondly, we validated the DOT score in the Chinese population. DOT score could have a higher predictability of DWI lesions in patients with transient neurological symptoms. Thirdly, the TIA-related scores including ABCD2, ABCD3, ABCD3I, Dawson score, and DOT score were compared in our study.

Our study also has several limitations. First, the samples were small, and our study population was based on hospital patients in a single-center, and there might have been selection bias. A study with a larger number of patients from multiple centers is needed to confirm the characteristics associated with DWI lesions. Second, besides DWI, it was reported that perfusion-weighted imaging (PWI) is useful in defining whether or not the transient neurological symptoms in DWI-negative TIA are true vascular events. The presence of a focal perfusion abnormality is a strong predictor of new DWI lesions at follow-up in DWI-negative TIA patients [24]. We need a variety of imaging tools to determine potential mechanisms underlying such events.

The authors thank all the study participants.

The study was approved by the ethics committee of Beijing Chaoyang Hospital and performed in accordance with the Declaration of Helsinki. All subjects provided written informed consent.