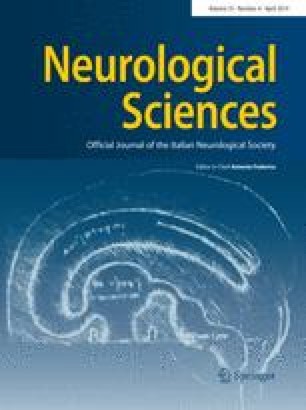 We report a case of large, unruptured, partially thrombosed aneurysm of the left posterior inferior cerebellar artery (PICA), presenting with meningitis. Although a meningeal syndrome is common in aneurysmal subarachnoid hemorrhage (SAH), it is an unusual presentation of unruptured intracranial aneurysms, unless a mycotic aneurysm is being considered. On the basis of clinical, radiological, and histopathological findings, we speculated that a large berry aneurysm became secondarily infected. Aneurysms caused by arterial localization of an infection (so called mycotic aneurysms) are well known, whereas there is only one report of primary berry aneurysms with secondary infection [1, 2].

A 60-year-old woman presented with a 2-week history of rhinitis and cough, and a 2-day history of intense occipitocervical pain, photophobia, nausea, and fever (38.5 °C on admission), and she was admitted with suspected meningitis. Neurological examination showed drowsiness and neck...