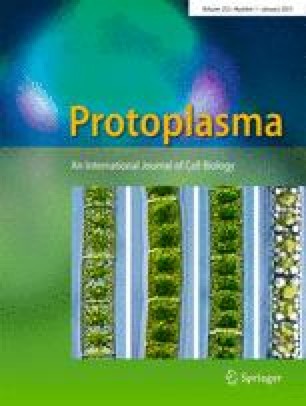 The determination of the division plane in protodermal cells of the fern Asplenium nidus occurs during interphase with the formation of the phragmosome, the organization of which is controlled by the actomyosin system. Usually, the phragmosomes between adjacent cells were oriented on the same plane. In the phragmosomal cortical cytoplasm, an interphase microtubule (MT) ring was formed and large quantities of endoplasmic reticulum (ER) membranes were gathered, forming an interphase U-like ER bundle. During preprophase/prophase, the interphase MT ring and the U-like ER bundle were transformed into a MT and an ER preprophase band (PPB), respectively. Parts of the ER-PPB were maintained during mitosis. Furthermore, the plasmalemma as well as the nuclear envelope displayed local polarization on the phragmosome plane, while the cytoplasm between them was occupied by distinct ER aggregations. These consistent findings suggest that Α. nidus protodermal cells constitute a unique system in which three elements of the endomembrane system (ER, plasmalemma, and nuclear envelope) show specific characteristics in the establishing division plane. Our experimental data support that the organization of the U-like ER bundle is controlled on a cellular level by the actomyosin system and intercellularly by factors emitted from the leaf apex. The possible role of the above endomembrane system elements on the mechanism that coordinates the determination of the division plane between adjacent cells in protodermal tissue of A. nidus is discussed.

The authors wish to express their thanks to Dr. H. Quader (Biocentre Klein Flothek, University of Hamburg) for access to their TEM facilities and to Prof. R. Boston (Department of Botany, North Karolina State University) for her kind offer of the antibodies. They also thank Dr. E. Rigana (Biological Imaging Unit, Foundation of Biomedical Research, Athens, Greece) for the use of CLSM, and Dr. K. Karpouzis for the preparation of the video material. This work was financed by the University of Athens.

709_2014_667_MOESM3_ESM.tif (25.8 mb)
Suppl. Fig. 3 Maximum projection of an image stack of 24 optical sections taken by CLSM of a protodermal area after ER immunolocalization and DNA staining with Hoechst 33258. The focal step size between confocal optical sections was 7 μm. Confocal image stacks were analyzed using Lasaf software. The ER is depicted by secondary FITC antibody in green, while the nuclei by Hoechst in blue. The projection shows clearly the U-like ER bundles in the majority of the protodermal cells as well as their arrangement in the same plane between adjacent cells. Scale bar = 20 μm. (TIFF 26466 kb)
709_2014_667_Fig15_ESM.gif (443 kb)

709_2014_667_MOESM7_ESM.avi (7.7 mb)
Video 1 Animated z-stack series of interphase protodermal cells observed by CLSM after ER immunodetection with 2E7 antibody. The ER appears green. At the beginning, the video focus on the cortical cytoplasm adjacent to the external periclinal cell wall and as it progresses passes through the middle of the cells and ends near the internal periclinal cell wall. The presence of U-like ER bundle is clear. (AVI 7880 kb)
Video 2

Rotated 3D projection of one of the cells shown in Video 1 using the Volocity 3D Image Analysis Software. At the beginning, the video focus on the U-like ER bundle portion lining the internal periclinal cell wall and then, as it rotates, shows the cortical cytoplasm lining the anticlinal and external periclinal cell wall. The organization of the U-like ER bundle along each of cell walls can be followed. (AVI 625 kb)

Successive images of a preprophase/prophase protodermal cell after ER immunodetection with 2E7 antibody. At the beginning, the video focus on the cytoplasm adjacent to the external periclinal cell wall, then it passes through the middle of the cell and ends at the cytoplasm lining the internal periclinal cell wall. The cell displays a well-formed ER-PPB. (AVI 327 kb)