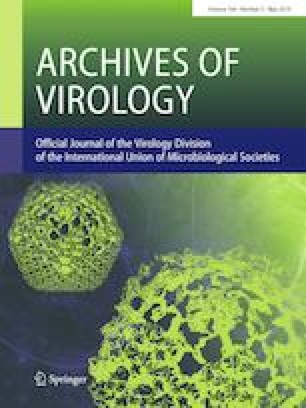 Antiretroviral agents are used against human immunodeficiency virus type 1 (HIV-1), but eliminating latent HIV-1 is difficult [1, 2, 3, 4, 5, 6, 7, 8, 9]. Therefore, suppression and prevention of HIV-1 infection by passive administration of neutralizing antibodies (nAbs) and induction of nAbs by vaccination would be beneficial [10, 11, 12, 13, 14, 15, 16, 17]. Few HIV-1-infected patients (10–30%) produce nAbs, and about 1% of infected people generate highly potent nAbs with broad neutralization coverage of HIV (elite neutralizers) [18, 19]. Due to advances in antigen-specific B-cell isolation techniques, broadly neutralizing monoclonal antibodies have been isolated from HIV-1-infected patients [20, 21, 22, 23]. Passive administration of these nAbs was protective against simian/human immunodeficiency virus (SHIV) in a macaque model [24, 25, 26, 27, 28, 29, 30]. However, inducing potent and broadly reactive nAbs by vaccination is problematic. Although the production of potent nAbs with broad cross-reactivity is related to somatic hypermutation [31, 32, 33, 34], the mechanism of induction is unknown. An animal model in which nAbs are produced would facilitate clarification of the mechanism of induction of nAbs against HIV-1, as well as the development of effective vaccines.

The rhesus macaque model of simian immunodeficiency virus (SIV) infection is important as an animal model of AIDS for pathogenicity studies and vaccine development. However, the envelope protein (Env) of SIV has a low level of amino acid sequence similarity to that of HIV-1 [35], and nAbs against the two viruses are not cross-reactive [36]. By contrast, SHIV [37], which is SIV containing the env gene of HIV-1, can be used to evaluate nAbs against the Env protein of HIV-1.

Controlling HIV and SIV is difficult, as they use CCR5 as a co-receptor; however, SHIV-89.6P (CXCR4) is easy to control [38]. Seaman et al. [39] reported that clustering analysis of the patterns of sensitivity defined four subgroups of clinical HIV-1 strains: those having very high (tier 1A), above-average (tier 1B), moderate (tier 2), or low (tier 3) sensitivity to antibody-mediated neutralization, with the majority of viruses belonging to tier 2. Indeed, the production of antibodies in rhesus macaques suppressed replication of SHIV-KS661(KS661) (CXCR4-tropic, tier 1B) [40]. SHIV-SF162P3 and SHIV-AD8 (tier 2) are used as challenge viruses in vaccine development [33, 41, 42, 43, 44, 45, 46]. We generated several different tier 2 challenge SHIVs to increase the reliability of the research. SHIV-89.6 is frequently used in vaccine studies [47, 48, 49, 50] and thus was selected for this study. First, KS661 (SHIV-89.6 strain), which mainly uses CXCR4 as a co-receptor, was modified to produce SHIV-MK1 (MK1) (tier 1B) and inoculated into rhesus macaques. Next, viruses from the infected macaques were passaged in two macaques, resulting in neutralization-resistant SHIV-MK38 (MK38) (tier 2) [51]. Ishida et al. [52] produced the MK38 molecular clone SHIV-MK38 #818 (#818) (tier 2).

SHIV-MK1, SHIV-MK1-first passage, SHIV-MK1-second passage, and SHIV-MK38 were described previously [51], as was SHIV-MK38#818 [52]. Based on the sequence information about co-receptor tropism of HIV-1 [53, 54], we designed neutralization-susceptible CCR5-tropic (tier 1B) MK1 by introducing five amino acid mutations (E305K, R306S, R318T, R319G, and N320D). We inoculated MK1 intravenously into two rhesus macaques (MM482 and MM483). To allow MK1 to adapt, we conducted in vivo passages from macaque M482 to macaque MM498 (SHIV-MK1-first passage), and subsequently to macaque MM504 (SHIV-MK1-second passage). This enhanced viral replication and the re-isolated virus was designated SHIV-MK38 (MK38). Next, we inoculated MK38 intravenously into rhesus macaques (MM481, MM501, and MM502) [51]. The molecular clone SHIV-MK38#818 (#818) (tier 2) was produced by Ishida et al. [52]. We mimicked the infection route of HIV-1 to humans and inoculated #818 into the rectum of rhesus macaques (MM 596, MM 597, and MM 599; Table 1) [52]. R5 virus infects intestinal memory CD4-positive T cells [55, 56]. Indian-origin rhesus macaques were used in accordance with the institutional regulations of the Committee for Experimental Use of Non-human Primates of the Institute for Frontier Life and Medical Sciences, Kyoto University, Kyoto, Japan. Macaques were housed in a biosafety level 3 facility and all procedures were performed in this facility.
Table 1

Neutralization assays were performed using various pseudoviruses with pooled plasma from HIV-1-infected patients (ZeptoMetrix, Buffalo, NY, USA) as a positive control. Luciferase activity was measured in TZM-bl cells [58]. Plasma was collected from the infected macaques [51, 52] and serially diluted, and the 50% inhibitory dilution of the plasma (ID50) was determined with the infectivity of wells lacking plasma defined as 100%. A high ID50 value thus indicates potent inhibition. Plasma from infected macaques was inactivated at 56 °C for 60 min and centrifuged at 11,000 rpm for 10 min. The pooled plasma of HIV-1-infected individuals and infected macaques was diluted in fourfold steps from 1:50 to 1:204,800 and pre-incubated with virus (100 TCID50) at 37 °C for 60 min. Next, 5,000 TZM-bl cells were cultured with the pre-incubated mixture in the presence of 5 mg of DEAE dextran/mL at 37 °C for 48 h. To measure luciferase activity, 50 of µL cell lysate solution (Toyo B-Net, Tokyo, Japan) was added to each well and the plate was agitated for 15 min. An aliquot of 30 µL of lysate was transferred to a Nunc F96 MicroWell white plate (Thermo Fisher Scientific, Waltham, MA, USA), and the luminescent substrate (50 µL) was added to each well. Luciferase activity was calculated with Mikrowin and a TriStar LB 941 reader (Berthold Technologies, Bad Wildbad, Germany). ID50 values were calculated as described previously [39].

As an anti-HIV-1-neutralizing monoclonal antibody, we used KD-247 (which recognizes the epitope GPGR in the V3 region of gp120 and was kindly provided by the Chemo-Sero-Therapeutic Research Institute, Japan). KD-247 was diluted fourfold from 20 to 0.005 µg/mL, and IC50 values were calculated as previously described [39].

Infection of macaques and antibody production

Neutralization against env of parental-lineage virus 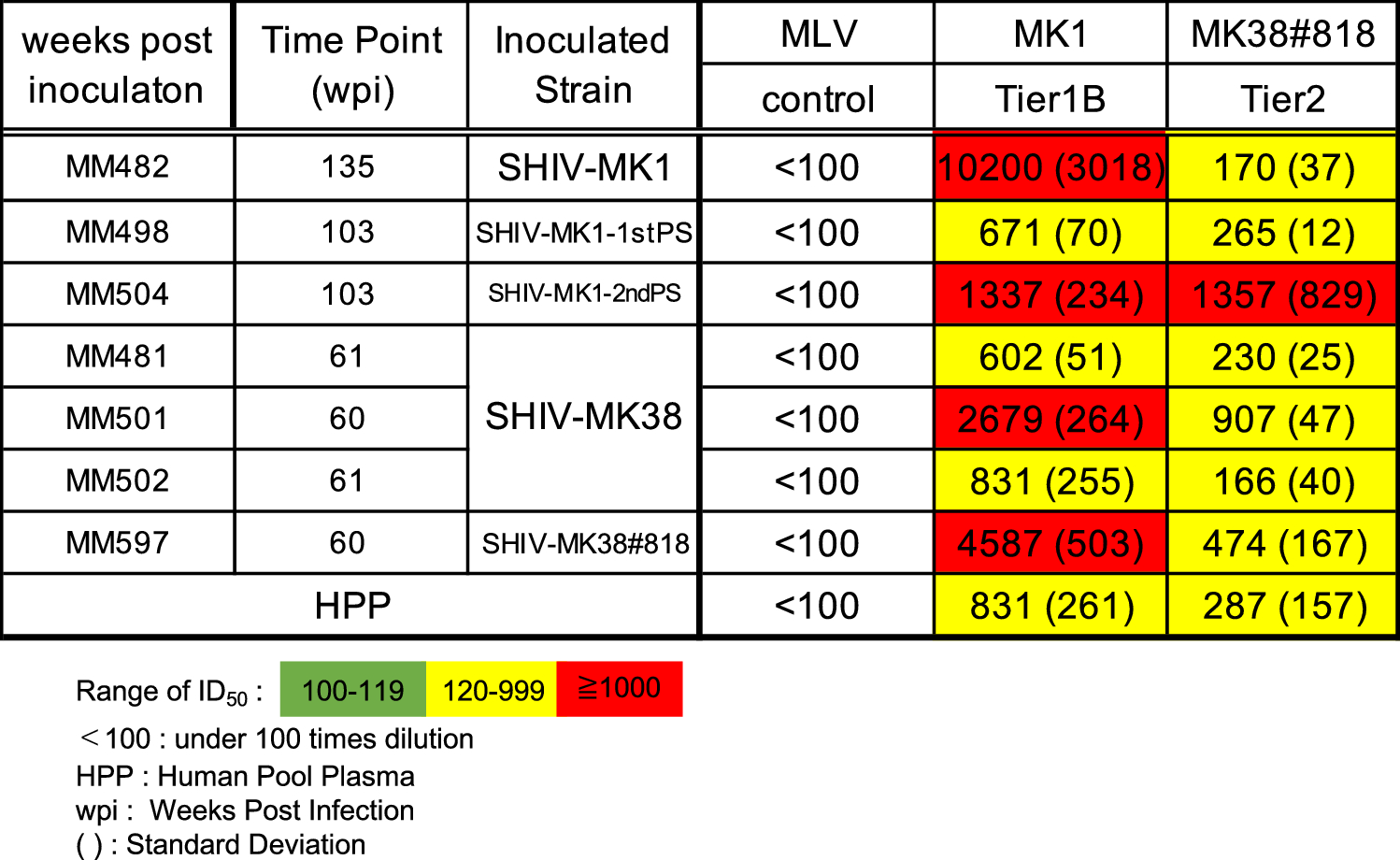 Neutralization activity and breadth against parental-lineage virus over time 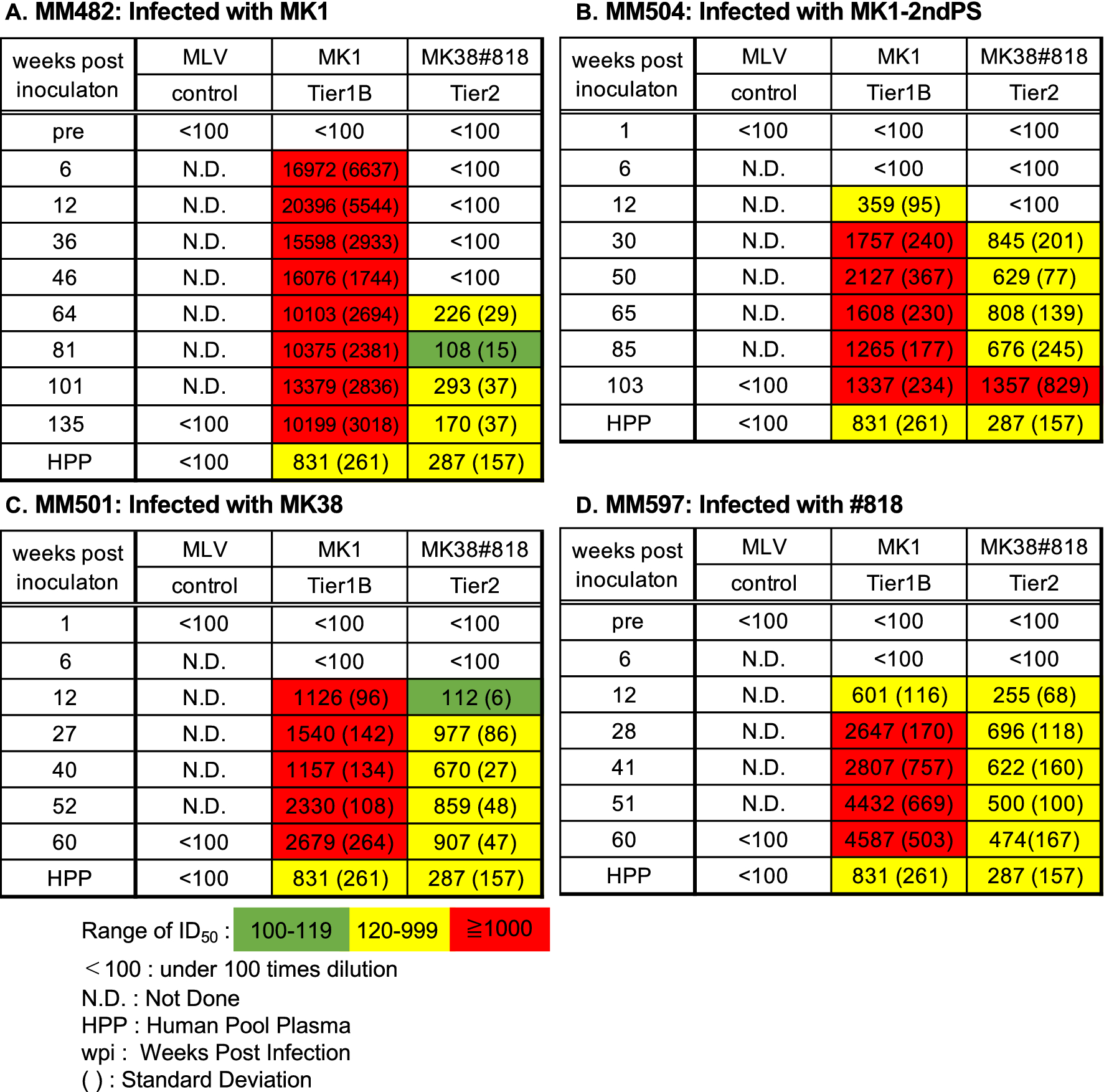 Neutralization against the ENV protein of heterologous viruses 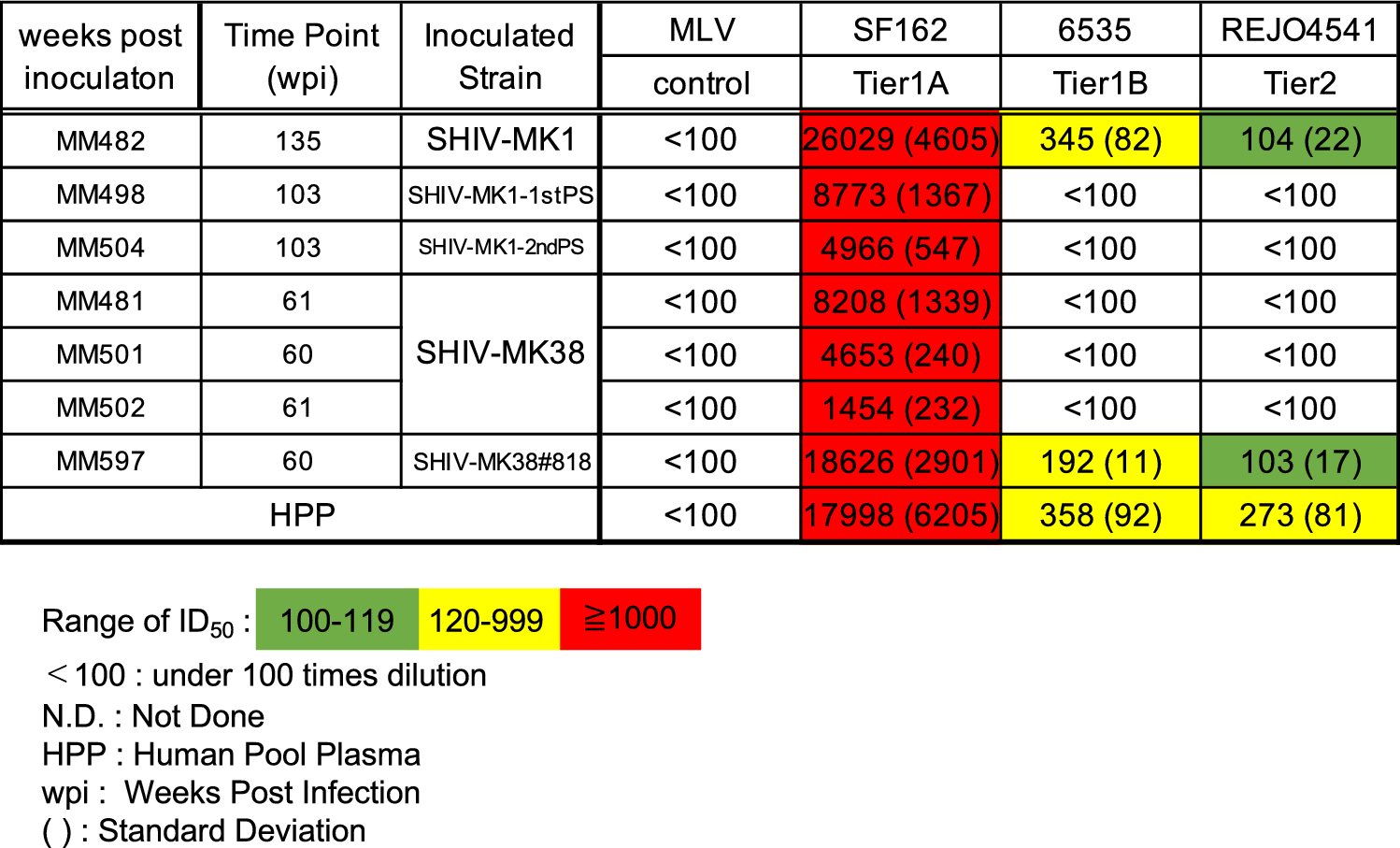 Neutralization activity and breadth against heterologous viruses over time 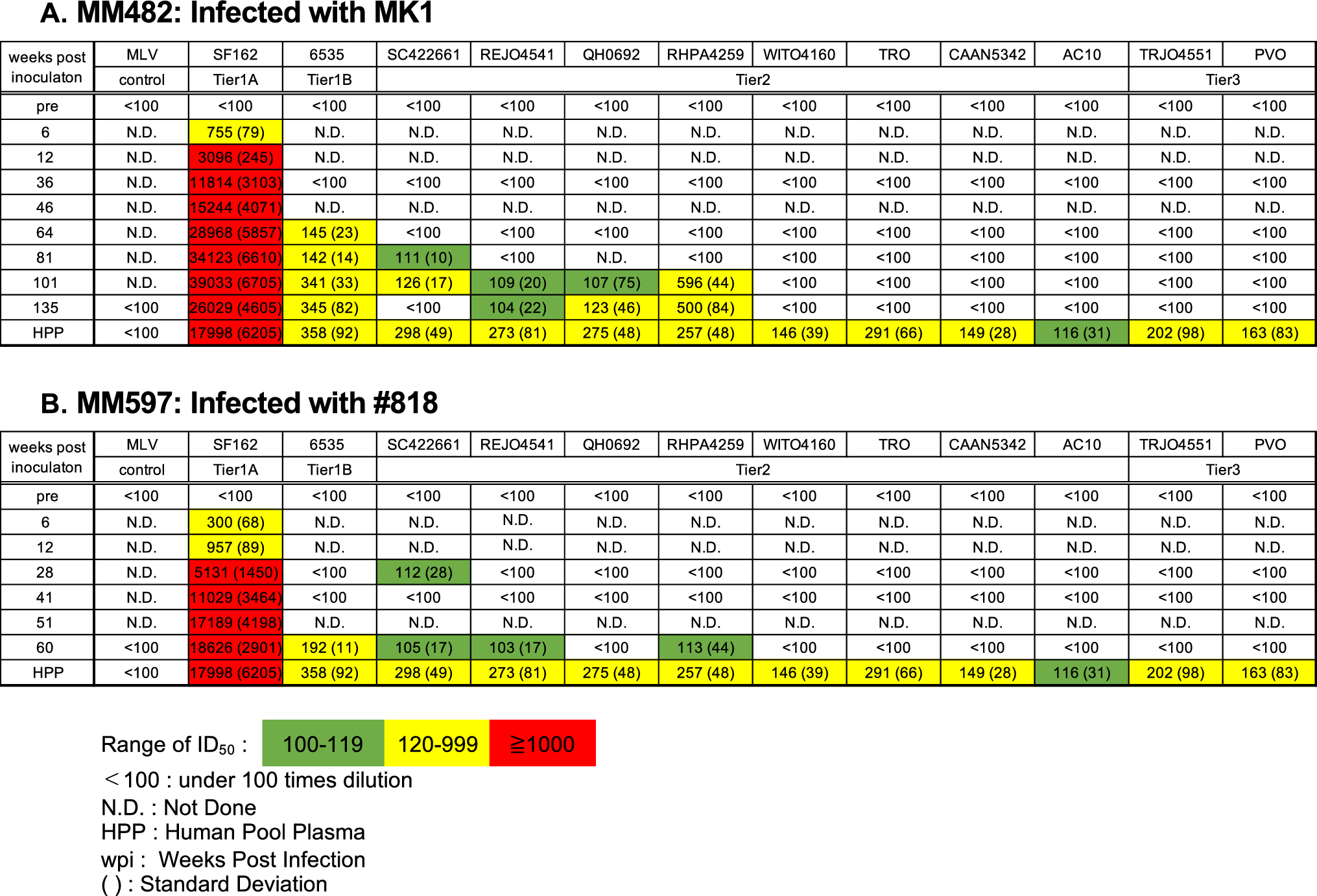 In the body of HIV-1-infected patients, neutralizing antibodies evolve as the virus mutates [34]. Therefore, neutralizing antibodies may be produced as a tier 1B virus changes to a tier 2 virus in macaques. To confirm this, we analyzed viral resistance to neutralization over time in MM482, which had the highest and broadest neutralization activity. Pseudoviruses with the env gene were collected from plasma during each week of infection and evaluated for neutralization resistance using KD247, #818 (tier 2 virus), and MK 1 (tier 1 B virus). The GPGR epitope of KD 247 was preserved in all viruses from 5 to 115 wpi in the plasma of MM482. Clones 3, 4, 5, 6, 8, 9, and 10 were prepared from 12 wpi plasma. Clones 6 and 10 contained minor amino acid mutations. All of the clones showed greater resistance to neutralization than the tier 1 B MK 1 virus, but less resistance than that of the tier 2 #818 virus. At 12 wpi, all clones (3, 4, 5, 6, 8, 9, and 10) remained tier 1B (Fig. 2A). Clones 2, 3, 5, 7, and 8 were prepared from 36 wpi plasma and contained minor amino acid mutations. Because clone 7 was more susceptible to neutralization than tier 1B MK 1, it was determined to be a tier 1A virus, and because clone 8 was between MK 1 and #818, it was determined to be a tier 1B virus. Because clones 2, 3, and 5 showed neutralization resistance similar to that of #818, they were determined to be tier 2 viruses (Fig. 2B). Three of five clones were of tier 2 at 36 wpi. Eight, nine and ten clones were prepared from plasma obtained at 46, 70 and 104 wpi, respectively. The neutralization resistance of clones with minor mutations, and of those with consensus sequences, was next evaluated. At 46, 70, and 104 wpi, all clones showed neutralization resistance equivalent to that of #818 and were thus determined to be tier 2 viruses (Fig. 2C, D, and E). These results suggest that tier 2 virus appeared at 36 wpi, and further that only tier 2 viruses proliferated after 46 wpi in MM482, which was infected with tier 1B MK1.

The SHIV strains MK1, MK38, and #818, which were derived from SHIV-89.6, are CCR5-tropic and have different levels of resistance to neutralization (tier 1B and 2) [51, 52]. These viruses are genetically similar to SHIV-89.6 P [50], which is widely used in vaccine development. In this study, we developed a rhesus macaque model of induction of anti-HIV-1 nAbs.

In MM597, nAbs against parental-lineage tier 2 viruses were rapidly induced, and nAbs against heterologous tier 2 viruses were beginning to be induced (Tables 3 and 5; Fig. 1). In HIV-1-infected patients, self- or type-specific Ab responses develop first, followed by Abs with increased affinity and neutralization activity against autologous viruses [34]. Indeed, neutralization activity against parental-lineage virus increased in rhesus macaques infected with CCR5-tropic SHIV. Moreover, in HIV-1-infected patients with nAbs against autologous virus, escape mutants are generated in the virus, and the env sequence diversity increases. Subsequently, the host humoral immune response results in production of nAbs with increased affinity. After a number of years, some patients produce antibodies that target one or more shared epitopes, resulting in cross-reactivity with heterologous strains. This leads to induction of broadly neutralizing antibodies with activity against diverse tier 2 viruses [34]. Therefore, #818-infected rhesus macaques mimic nAb induction in HIV-1-infected patients and may be used to evaluate the induction of tier 2 nAbs.

KS661 was susceptible to neutralization (tier 1B). Induction of Abs in macaques infected with KS661 inhibits viral replication; however, MK38 became resistant to neutralization (tier 2) [52]. MK38 and #818 established persistent infections despite nAb production (Tables 2 and 4), possibly due to the emergence of neutralization-escape mutations or to resistance to nAbs due to the three-dimensional structure of the virus. Indeed, when the co-receptor changes from CXCR4 to CCR5, the resulting decrease in the net positive charge of V3 reduces its surface exposure, resulting in immunological escape from nAbs [52, 59].

nAbs against tier 2 parental-lineage and heterologous viruses can be induced by infection with tier 1B virus (Tables 2, 3, and 5; Fig. 1). In HIV-1-infected patients, neutralization results from viral mutations [34]. We analyzed viral resistance to neutralization over time in MM482. In MM482 infected with tier 1B MK 1 virus, the virus mutated from tier 1B to tier 2 at 36 wpi. In MM482, nAbs against the tier 2 #818 virus were detected at 64 wpi (Table 3A), and against two of the heterologous tier 2 viruses in the panel after 101 wpi (Table 5A). In MM597 infected with the tier 2 #818 virus, nAbs against three strains of the heterologous tier 2 virus panel were beginning to be detected at 60 wpi, although their ID50 values were low (Table 5). These results imply that induction of broadly neutralizing antibodies occurs more than 60 weeks after infection with neutralization-resistant virus.

Based on our observations, #818-infected rhesus macaques may be useful models for the induction of tier 2 nAbs. In addition, MK1 (tier 1B)-infected rhesus macaques will enable analysis of the neutralization resistance of viruses that induce tier 2 nAbs and the antigen needed to induce broadly neutralizing antibodies. Finally, these animal models will facilitate the development of HIV-1 vaccines.

We thank the NIH AIDS Reagent Program for providing a panel of reference subtype B env clones.

The authors have no conflicts of interest to declare.

All animal studies were performed under anesthesia and adhered to protocols approved by the Committee for Experimental Use of Non-Human Primates of the Institute for Frontier Life and Medical Sciences, Kyoto University, Kyoto, Japan. Macaques were housed in a biosafety level 3 facility in which all of the procedures were performed.