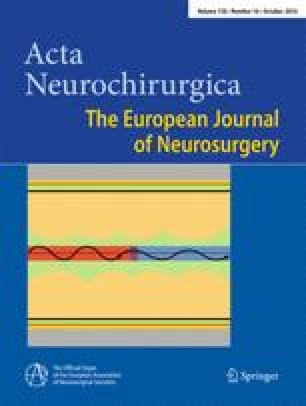 Loss of olfaction has been considered inevitable in endoscopic endonasal resection of olfactory groove meningiomas. Olfaction preservation may be feasible through an endonasal unilateral transcribriform approach, with the option for expansion using septal transposition and contralateral preservation of the olfactory apparatus.

An expanded unilateral endonasal transcribriform approach with septal transposition was performed in five cadaver heads. The approach was applied in a surgical case of a 24 × 26-mm olfactory groove meningioma originating from the right cribriform plate with partially intact olfaction.

The surgical approach offered adequate exposure to the anterior skull base bilaterally. The nasal/septal mucosa was preserved on the contralateral side. Gross total resection of the meningioma was achieved with the successful preservation of the contralateral olfactory apparatus and preoperative olfaction. Six months later, the left nasal cavity showed no disruption of the mucosal lining and the right side was at the appropriate stage of healing for a harvested nasoseptal flap. One year later, the preoperative olfactory function was intact and favorably viewed by the patient. Objective testing of olfaction showed microsomia.

We would like to thank Zach Folzenlogen, MD, for assistance with illustrations in this manuscript.

No funding was received for this research.

All authors certify that they have no affiliations with or involvement in any organization or entity with any financial interest (such as honoraria; educational grants; participation in speakers’ bureaus; membership, employment, consultancies, stock ownership, or other equity interest; and expert testimony or patent-licensing arrangements), or non-financial interest (such as personal or professional relationships, affiliations, knowledge or beliefs) in the subject matter or materials discussed in this manuscript.

All procedures performed in studies involving human participants were in accordance with the ethical standards of the institutional and/or national research committee and with the 1964 Helsinki Declaration and its later amendments or comparable ethical standards.

For this type of study formal consent is not required.

The authors describe five cadaveric dissection and one illustrative case of unilateral transcribriform plate access to preserve unilateral anosmia through an expanded endonasal approach. The idea is interesting considering the impact of olfactory loss in a given patient. This is, however, of very limited use, as most often the tumor originates from the midline and the olfactory epithelium will inevitably be disturbed. Also, the limited exposure makes operation on larger tumor difficult and suboptimal.

The expanded endonasal approach is routinely criticized for treating anterior skull base meningiomas, and although I am an advocate for this approach for selected cases(mainly tuberculum sella location), I feel a more anterior tumor is less ideal for endonasal exposure, as it necessitates a significant skull base destruction for a tumor which otherwise is easily removed through a small craniotomy (e.g., case shown here) and also much quicker. The 5–20 % risk of CSF leak in authors’ experience is unfortunately too high to warrant resection of a more anteriorly located meningioma through an endonasal approach. Also, one should emphasize that we are not at the beginning of the endonasal skull base surgery era, and we still have a high rate of CSF leak. There is no question that a mini craniotomy will be quicker in removal of this particular tumor from an unbiased view of my personal practice dealing with these lesions routinely through both open and endoscopic approach.

This is a very nice study on the concept of trying to preserve olfactory function in smaller olfactory groove meningiomas with unilateral attachment while applying an endoscopic endonasal approach. In the ongoing debate between proponents for either surgical approach from above or from below, this indeed adds something new. In larger olfactory meningiomas, olfaction is often already lost before surgery, so preservation of olfaction is not an issue. However, in smaller lesions it certainly is! For me, this was the main reason to approach such lesions from above because preservation of olfaction is a real option then, especially when applying the technique of protective coating of the exposed olfactory bulb and nerve with fibrin glue (as already published by our group in 1998; de Vries J, Menovsky T, Grotenhuis JA, van Overbeeke JJ. Protective coating of cranial nerves with fibrin glue (Tissucol) during cranial base surgery: technical note. Neurosurgery. 1998 Nov;43(5):1242–6). The big advantages of the endoscopic endonasal approach for smaller meningiomas are twofold: early devascularization and complete removal of the bony and dural origin of the meningioma. The disadvantage is: difficulty of watertight closure of the skull base/dural defect and loss of olfaction. The latter has been dealt with in this excellent study, also showing that even with anatomical preservation of the olfactory bulb and tract, functional preservation is an arduous task but any attempt is worthwhile.