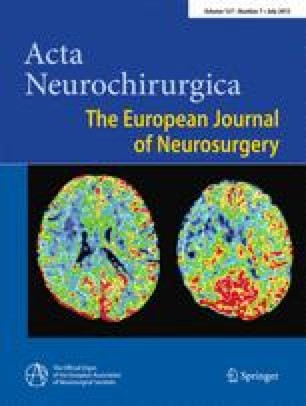 Delivery of hydatid cysts, especially large ones, without rupture is very important and there is still no 100 % successful method.

After the hydatid cyst was reached, starting near the surface working around the cyst toward the base, a Foley probe was advanced and, in the region of desired dissection, the balloon of the Foley probe was inflated, and adhesion bands were freed to allow dissection.

We believe our balloon-aided dissection technique is a method that increases the chances of delivering hydatid cysts, with no calcification and secondary infection, without rupture.

It is very important to remove cerebral hydatid cysts without rupture, especially those of large size. Wide scalp flap and dissection of the atrophic cortex, lowering the head of the operating table to benefit from gravity and the use of warm saline between the hydatid cyst and brain parenchyma to deliver the hydatid cyst is the most frequently used method, known as Dowling’s technique [1], with an 88 % success rate reported [2]. The rupture of the cyst may allow spread of the parasite and cause an anaphylactic shock tableau that may result in death and, in spite of medical treatment, repeated surgical interventions may be required for newly-formed cysts [3].

As the hydatid cyst can form in any anatomical region within the cranium or brain, a standard surgical anatomy description was not completed.

On preoperative radiological tests, more complicated adhesions that may ease cyst rupture, such as local calcification of the cyst wall or vascularisation in the cleavage plane, may be suspected. It is recommended that the Foley probe be inflated a little away from these areas, accompanied by intraoperative ultrasound. In this way it may be possible for the cyst wall to be passively removed from the adhesion bands.

Description of the technique

The new surgical method we developed is applied during classic wide craniotomy for hydatid cyst surgery or standard surgical interventions like wide dura opening (Fig. 4). It was determined that the region where the cyst comes out of the cortex, or where the cortex is thinnest, is the most appropriate place to deliver the cyst. Firstly, dissection between the cyst and brain tissue was done to allow the tip and uninflated section of the balloon of the Foley probe to enter without penetrating the parenchyma. Starting from the surface, the Foley probe was advanced step by step around the cyst towards the base, and in regions where dissection was required, the balloon of the Foley probe was inflated and dissection was completed to free any adhesion bands.

Firstly a number 12 Foley probe was advanced between the cyst and brain, the balloon was inflated with saline and the hydatid cyst was freed from the brain tissue. When the cleavage line was formed, to ease delivery the Foley probe was increased to numbers 14 and 16. To start delivery of the cyst, the balloon was inflated with water in stages and the balloon was pulled slightly outward and released to support the initiation of the cyst removal. During each inflation, we patiently waited for the balloon to push the cyst slightly outward, allowing gravity and, if necessary, a finger on the surface of the cyst to slowly roll the cyst outward and ease removal. This method was used without requiring irrigation with hypertonic saline to remove four large hydatid cysts in three cases without damaging the cyst wall, allowing dissection and delivery without rupture (see ESM 1 movie).

In the early postoperative period, the patient is monitored in the intensive care unit with the Glasgow Coma Scale for neurological follow-up. The surgical field is checked with postoperative cranial computerised tomography (CT)

We believe the balloon-assisted hydatid cyst removal method may be used to remove large cerebral hydatid cysts exceeding the cortex or located more deeply without rupture.

We believe this method is not appropriate for hydatid cysts with calcified walls or infection. If the most distal tip of the balloon of the Foley probe penetrates brain parenchyma and the balloon is inflated, brain damage may occur. Dowling’s method has similar risks. In fact, if the irrigation probe penetrates the parenchyma and is not noticed, uncontrolled administration of fluid may cause more harmful unwanted complications. Technically, if the balloon of the Foley probe is used, a balloon apparatus that is easier to use and more effective, which also allows irrigation, may be developed. To determine the true success rate of the technique, there is a need to increase the number of cases.

How to avoid complications

To deliver hydatid cysts successfully and easily, preoperative radiological examination should be completed to evaluate alveolar type, Echinococcus infection and cyst wall calcification. The number, location, distance to surface and most appropriate intervention location of the hydatid cysts should be determined. Wide craniotomy and dura opening allow both easy removal of the cyst and the possibility to access different intervention locations. The most significant complication of cerebral hydatid cyst surgery is rupture of the cyst. In case of a situation with cyst rupture, hypertonic saline should be prepared and ready to wash the interior of the cyst and surrounding tissue. We believe that patient application of this method may prevent development of this complication.

Additionally, the slow inflation of the balloon in stages both eases dissection and exposes the cerebral parenchyma to less pressure.

The most important factors are careful dissection, slow inflation of the balloon in stages and patient waiting for the hydatid cyst to deliver, changing table position to gain more benefit from gravity and the valsalva manoeuvre to remove the cyst without rupture.

To see that the Foley probe is advancing correctly, to identify the areas of intense adhesion, to determine anatomical relations and to monitor the inflating balloon, the use of intraoperative ultrasound can provide significant contribution to preventing possible complications.

This method has been improved from Dowling’s method. We use a balloon instead of saline irrigation. Patients can be informed that potential risks do not differ from the standard Dowling method.