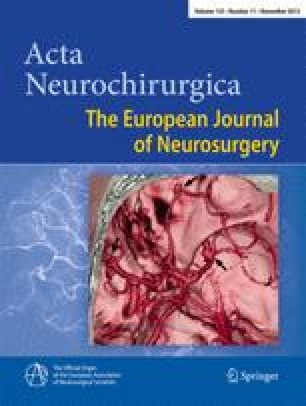 Routine shunting to minimize ischemia during carotid endarterectomy (CEA) is controversial. The aim of this study was to stratify the ischemic parameters associated with CEA and evaluate the effect of routine shunting in attempting to mitigate those ischemia.

SSEP<50%, >5 min occurred in 15 % of CEAs during cross-clamping, and shunting reversed the SSEP changes. New DWI lesions were observed in 4.1 %. Pre-clamping the common and external carotid artery during dissection (pre-clamp method) decreased the rate of new DWI lesions compared to without pre-clamping (3.5 % vs. 7.5 %, P = 0.22). Occlusion time was significantly longer in the pre-clamp method than without pre-clamping (P < 0.0001). However, the incidence of SSEP<50%, >5 min was not increased with the pre-clamp method (p = 1.0) when using information regarding SSEP and collaterals to modify the speed of shunt manipulation. MRA asymmetry was identified in 39 CEAs (15.8 %) with correction of asymmetry postoperatively. MRA asymmetry correlated with symptomatic hyperperfusion (P = 0.0034). Only three CEAs had symptomatic hyperperfusion (1.2 %) with minimal symptoms. Ten CEAs sustained transient ischemia, symptomatic hyperperfusion, or 30-day-stroke (composite postoperative ischemic symptoms). Logistic regression analysis confirmed that SSEP<50%, >5 min (p = 0.009), new DWI lesions (p = 0.004) and MRA asymmetry (p = 0.042) were independent predictors of composite postoperative ischemic symptoms.

We read with particular interest the article by Inoue et al. The authors should be congratulated for all the data they collected and presented. The authors admit to several study limitations, including retrospective analysis design and a small number of cases in some subgroups. The authors report on 248 carotid endarterectomies and the aims of study were to stratify ischemic parameters associated with carotid endarterectomy (CEA) and evaluate the combination of routine electrophysiological monitoring and shunting to mitigate the ischemia.

Some facts are noteworthy, such as the analysis of magnetic resonance angiography (MRA) asymmetry for postoperative hyperperfusion, the incidence of somatosensory evoked potential (SSEP) decrease reversed by shunt introduction, introduction of extracranial-intracranial bypass for security in contralateral occlusion and absence of any single injury to the ramus marginalis of the facial nerve in 248 CEAs.

However, the article is often difficult to read and follow. The authors present a tremendous amount of data and a number of correlations. The title includes 24 words and the reader has to pay utmost attention not to get lost in the article. We would like to underscore a few issues that deserve special comment and criticism.

Monitoring and routine shunting. Over the past 25 years, many articles have been published on various CEA practices ranging from obsolete “no shunting, no monitoring” to routine shunting in monitored surgery. With no respect to this, to the CEA techniques and type of anesthesia, the MM results always range from 1 to 3 % when the series is reported by a single institution. It seems the risk of CEA resides elsewhere and not in the technical aspects of surgery. Timing of surgery, selection of patients for CEA, clinical presentation, the true extent of carotid stenosis, the length of the stenosis probably represent some of the factors that are more likely to influence the outcome of surgery than the technical aspects of surgery [1, grant project IGA NT 13627-4]. Inoue et al. report an MM rate of 2 %, a figure well within reported limits outside randomized trials.

There are various techniques used today to localize potential hypoperfusion during CEA. Using local anesthesia, any neurological deterioration during surgery calls for the need of shunt placement. The GALA trial showed that local anesthesia does not lead to a significantly better outcomes than CEA performed under general anesthesia [2]. Various techniques have been used when general anesthesia is applied for CEA. Recently, the most frequently used policy is a selective shunting strategy with some type of monitoring (e.g., SSEP, EEG, TCD, xenon CT, or even old-fashioned stump pressure monitoring). Selective shunting minimizes the inherent risk of shunt introduction. No definitive answer is available as to which technique is most reliable. In our hands a combination of bilateral SSEP and EEG provides the best results [3].

To detect cerebral hypoperfusion the authors used the SSEP monitoring procedure. They believe that a cut-off of 50 % amplitude decrease longer than 5 min predicts postoperative neurological deficits. There are many studies on this topic, including one from our group [3]. Our strategy is rather similar (bilateral SSEP and EEG) but the shunt is used selectively. Inoue et al. monitor SSEP and introduce a shunt in every case. In our view, the combination of routine shunting and SSEP monitoring is redundant in the sense that it is like wearing both belt and suspenders.

The authors spent 17 min during CEA for cross-clamping. This time of internal carotid artery blood flow interruption consists of 10 min for shunt introduction and 7 min for its removal. Their “pre-clamp” technique to occlude common and external carotids to decrease the risk of embolization is one explanation for the long duration of the clamping period. It is well documented that the sequelae of ischemic events depends on duration and depth of ischemia in the ischemic area [4]. Unlike Inoue et al., we are aware that the absence of oxygen causes neuronal death within 5 min and therefore the clamping period should be shortened as much as possible. In cases when a shunt is introduced, the monitoring with SSEP and EEG and subsequent shunt introduction takes 3–4 min while shunt removal requires another 1–2 min. It may easily be possible that some of the ischemic events in the Inoue et al. study were caused rather than prevented by this very long occlusion time. The fundamental question is whether the surgeon believes that significant changes in monitoring correlate with the risk of neurological deterioration. In such a scenario, a shunt is introduced; in those cases with stable monitoring, endarterectomy is performed without shunt placement. If monitoring is considered unreliable or not available, routine shunting is an acceptable strategy.

In the Inoue et al. study SSEPs were monitored unilaterally only. Thus, the value of this type of monitoring is very limited. It is highly unlikely that all conditions that might influence the monitoring and that can be adjusted and evaluated in bilateral monitoring only are adjusted (especially, e.g., the effects of arterial blood pressure fluctuations and depth of anesthesia). We do not understand how the lack of manpower may cause unilateral rather than logical bilateral monitoring.

Contralateral internal carotid artery (ICA) occlusion was present in 10 CEAs (4 %), with seven CEAs preceded by contralateral superficial temporal artery-middle cerebral artery anastomosis (EC-IC) after confirming the compromized vascular reserve of the contralateral side with single photon emission computed tomography (SPECT). The number of patients who passed this test (7 of 10) is surprising. In our study we have found this ratio to be far less (1 of 10) [5]. This ratio seems to be a standard ratio in the selection process for possible EC-IC. After the contralateral CEA, the hemodynamic parameters of the hemisphere ipsilateral to the carotid occlusion improved due to the increased flow via the Circle of Willis. We do not believe that insufficient anterior communicating artery is common in the Japanese population. Further, we do not believe in an MM rate of 0 % in any surgery, but as of now our stats show an MM rate of 0 % in our series of 77 patients with contralateral carotid occlusion and with shunting in 5 % of the cases. Two surgeries can never have less risk than one surgery. The authors performed seven EC-IC bypasses without any complications, which is nothing exceptional. A first complication, which unavoidably must come, will most likely be the last bypass for security. Inoue et al. do not present any data supporting the strategy of preventive contralateral bypass.

In the introduction the authors discussed cognitive function after CEA and potential neurocognitive decline, as well as a possible effect of shunting to reduce these potential impairments. We fully agree with the authors on this topic and this is most likely the reason for the employment of routine shunting. However, Inoue et al. did not study any neurocognitive sequelae of CEA and thus the authors could not correlate their results of ischemic risk stratification to neurocognitive outcome.

We would like to congratulate the authors for amassing an extraordinary amount of data. They also should be applauded for how thoroughly the patients are managed. CEA at the present authors’ institution is not a 60-min routine surgical procedure as in the majority of other institutions in the world. Although Inoue et al. raise many questions and speculate about a number of issues related to CEA and its ischemic complication, it is a pity the reader is offered few substantiated answers.

We are thankful to the authors for presenting the topic of CEA and cerebral ischemia in a neurosurgical journal. In many European countries, neurosurgeons do not perform CEAs. In these countries CEA is a procedure used primarily by vascular or general surgeons. The goal of CEA is the prevention of cerebral damage (stroke) in the same manner as in clipping the aneurysm, resecting the arteriovenous malformation (AVM) or cavernoma. For us, it is rather difficult to make the distinction between the damge caused by bleeding or ischemia. If the brain is endangered and a neurosurgeon has the means and knowledge to prevent such damage, he or she is the best suited physician to provide this support.