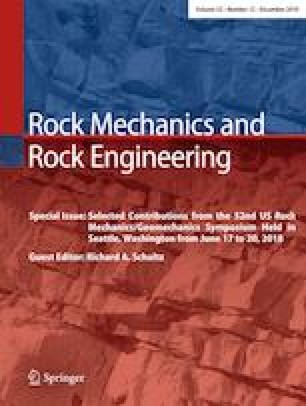 To obtain a comprehensive understanding of the difference between deep and shallow rocks, and the damage evolution laws of a rock mass at different depths, a case study was conducted on the Pingdingshan Coal Mine. Mechanical behavior and real-time acoustic emission (AE) testing were carried out to investigate the spatiotemporal evolution of the damage in coal at different depths under triaxial compression conditions. Coal samples from different depths (300, 600, 700, 850, and 1050 m) of the same coal seam were collected, and the geostresses measured at each depth were considered in the two-factor simulation method. The AE characteristics and the spatiotemporal evolution of the coal damage at different depths were also obtained. The testing results show that under the influence of the confining pressure caused by increased geostress, the AE activity and the average scale of the cracks in the coal decreased with increasing depth. The deeper coal developed more small cracks and more plastic strain. With increasing depth, the fractal dimension reduction mode of the spatial distribution of AE under continuous loading changed from dropping suddenly from a higher dimension level (2.97) at a higher stress level (70%) to dropping slowly from a lower dimension level (2.63) at a lower stress level (20%). The generation of AE events was more uniform in the time dimension, while the spatial distribution became more uneven and clustered. With continuous loading, the number of AE events and damage in the shallow coal increased, and the dimension of the spatial distribution of AE decreased sharply during the failure stage before the peak stress was reached. With increasing depth, the damage initiation of coal shifted to an earlier time, while the damage evolution process was more stable and orderly, and ended with a higher damage degree. The sudden damage increase of deep coal was not obvious when approaching to failure. The shallow coal was more brittle and prone to sudden failure with the centralized release of AE energy after reaching the peak stress. However, the deeper coal exhibited a more plastic behavior and the plastic deformation became more obvious during the loading process with the gradual development of damage. These research results deepen the understanding of rock mechanics at different depths, promote the study of the difference in the damage laws of deep and shallow rock masses, and provide a meaningful reference for microseismic monitoring and disaster prevention in deep rock engineering.

Dimension of the spatial distribution of AE

Crack density with a diameter greater than Dmc (mm−3)