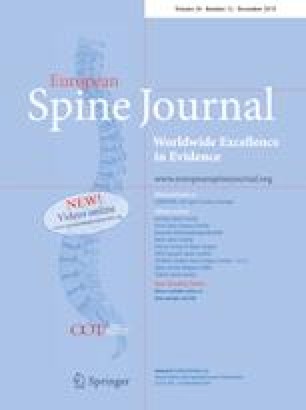 The purpose of this study was to investigate the subjective recovery from pregnancy-related pelvic girdle pain (PGP) during the first 6 weeks after delivery and to detect possible risk factors for a poor recovery.

The participants were included in this study at the routine ultrasound examination at 18 weeks of pregnancy. The women received a weekly SMS with the question “How many days during the last week has your PGP been bothersome?” The SMS-track from the final 10 weeks of pregnancy and first 6 weeks after delivery were assessed and sorted, based on individual graphs. A total of 130 women who reported PGP during pregnancy and met for clinical examination 6 weeks after delivery were included in the study.

The prognosis following PGP in pregnancy is good and the majority of women recovered substantially from severe and moderate pregnancy-related PGP within 6 weeks after delivery. For many women, a subjective substantial recovery occurred within 2 weeks after delivery. Predictors for a poor recovery were multiparity, PGP the year before pregnancy and a high pain intensity during pregnancy.

These slides can be retrieved under Electronic Supplementary Material.

Musculoskeletal pelvic girdle pain (PGP) during pregnancy is a common condition [1, 2, 3]. The exact prevalence is difficult to assess due to inconsistent definitions of PGP and the lack of clinical testing. Depending on the definition, the prevalence of pain in the lumbopelvic area during pregnancy ranges from 4‒90% in various studies. This indicates many different ways to measure and define this condition [4, 5, 6].

The European guidelines for the diagnosis and treatment of PGP from 2008 define PGP as “pain experienced between the posterior iliac crest and the gluteal fold, particularly in the vicinity of the sacroiliac joints. The pain may radiate in the posterior thigh and can also occur in conjunction with/or separately in the symphysis. The endurance for standing, walking, and sitting is diminished” [5]. Although the guidelines exclude lumbar causes of pain for the PGP diagnosis, many pregnant women experience low back pain (LBP), exclusively or in addition to pain in the pelvic area. The consequences of PGP vary, from only minor pain and disability to severe pain, disability, reduced quality of life and absence from work. Overall, the etiology of PGP is poorly understood, and so are the reasons why some women recover and some women do not.

Although most women recover from PGP within 6 months after delivery [7, 8, 9], some women experience years of intermittent or persistent PGP affecting their daily life activities, ability to work and quality of life [10, 11, 12, 13, 14, 15]. We have previously shown that 16% of women reporting musculoskeletal pelvic pain (PP) during pregnancy were found to have persistent PGP 3‒6 months after delivery, and that the risk factors for persistent pain were age 30 years and above, both PP and LBP during pregnancy, and moderate or high disability measured by Oswestry Disability Index (ODI) during pregnancy [16].

The use of automated text messaging and mobile phones has previously been used to describe recovery patterns [17], and short message service (SMS) is a low-key method that requires little effort from the participants. Also, most people check their mobile phones regularly, which limits memory decay. Women who have just given birth are in a stressful situation, and to answer an SMS may be more feasible than to fill in a traditional questionnaire, answer a phone call, or to meet for an interview or a clinical examination.

The aim of this study was, by means of a weekly SMS question, to investigate the subjective recovery from pregnancy-related PGP the first 6 weeks after delivery and to detect possible risk factors for a poor recovery.

This is an SMS-based, prospective, longitudinal cohort study of women during the final 10 weeks of pregnancy and the first 6 weeks after delivery. The women were included in the study at the routine ultrasound examination at 18 weeks of pregnancy at Stavanger University Hospital, Norway, from March to June 2010 [18].

Inclusion criteria were a low-risk singleton pregnancy and comprehension of the Norwegian language. All women, both symptomatic and asymptomatic, were asked to sign an informed consent. They were followed from pregnancy week 18 until 6 weeks after delivery with weekly, automated text messages (SMS-track). Women that reported pain in the pelvic area at or beyond 18 weeks were invited to undergo a clinical examination and fill in questionnaires at 18 and 30 weeks of pregnancy, and 6 weeks after the ultrasound estimated date of delivery (EDD).

Every Sunday, the women were asked in an SMS: “How many days during the last week has your pelvic pain been bothersome?” If there was no reply, the question was repeated 24 h later. The question should be answered with one single number between 0 and 7, and the response was automatically entered into a database, where continuous information from each woman was saved.

The SMS-track from 10 randomly selected women was assessed by two of the authors. The individual pain patterns were visualized in graphs, including the final 10 weeks of pregnancy and the first 6 weeks after delivery. From a clinical perspective, a first proposal for grouping was agreed on. Then, three authors individually investigated and sorted the pain patterns into the different groups. The 120 different graphs were assessed by these authors together, resulting in a revised set of subgroups. A new assessment was then done individually, blinded to the initial decisions. Thereafter, in a final meeting, a consensus for all 120 graphs was reached. The subgroups are defined and presented in Box 1, and examples of individual pain patterns are given in Fig. 1.
Box 1

Subgrouping before and after delivery

In all, 130 women met for the clinical examination 6 weeks after EDD. However, 10 women lacked information on when the SMS-track started, resulting in 120 women eligible for further assessment. Seventy-six women reported a high number of days (≥ 5) with bothersome PGP per week before delivery and were categorized as having severe PGP; see Table 1. Another 18 women reported on average ≥ 3 days per week of bothersome PGP, and were categorized with moderate PGP.
Table 1

In all, 21 women had on average less than 3 days of bothersome PGP per week the final 10 weeks before delivery. Another five women did not respond, or responded irregularly, to the weekly SMS before delivery, and were categorized as missing. These 26 women are not included in the statistical analyses.

Demographic and clinical features for the women with substantial recovery (n = 63) and women with either no, transitory, or incomplete recovery (n = 13) are shown in Table 2. For most variables, there was no statistically significant difference between the two groups. More than 50% of the women were 30 years or older at inclusion in the study, and the majority of women had more than 12 years of education. More women in the substantial recovery group were primiparous, 37% versus 8% in the poor recovery group, and 1 out of 4 women had experienced depression in the beginning of pregnancy or before 30 weeks of pregnancy. Before pregnancy, 1 out of 4 women exercised regularly, but once pregnant, the number of women dropped to 0‒10%. Many women had experienced PGP in previous pregnancies and the majority of women (85%) reported having LBP in addition to PGP.
Table 2

The number of available women is indicated for the variables where data is missing. The results are given as means (SD) and counts (percentages)

Two variables were statistically significantly different between the two groups. First, more multiparous women experienced no, transitory, or incomplete recovery compared with primiparous women (p = 0.042). Second, women who reported PGP the year before pregnancy were found to have insufficient recovery compared with women who reported no PGP the year before (p = 0.047).

Figure 3 shows the retrospectively reported pain intensity due to PGP, as reported in questionnaires at 18 and 30 weeks of pregnancy and 6 weeks after delivery. Women with either no, transitory, or incomplete recovery reported overall statistically significant higher pain intensity throughout the whole pregnancy (p = 0.026).

In this study, 83% of the women that reported severe or moderate PGP during the final 10 weeks before delivery experienced a substantial recovery within 6 weeks after delivery. Of these, 44% reported 0 days of bothersome PGP per week already within 2 weeks after delivery. Risk factors for a poor recovery were found to be multiparity and PGP the year before pregnancy. Also, women reporting a high pain intensity for PGP on the NRS scale during pregnancy experienced a poor recovery.

To our knowledge, this is the first study to investigate pregnancy-related PGP week by week before and after delivery. Other studies investigating persistent PGP have collected data several weeks, months, or years after delivery. Our data support the findings of Albert et al. [7], where the majority of women experienced recovery from PGP within 1 month after delivery. In addition, we find that for many women a full recovery occurs within 2 weeks after giving birth.

The weekly SMS data collection is a strength of this study, and the response rate to the SMS question before delivery was close to 90%. However, after delivery, the response rate gradually dropped. We speculate that a reason for this is the exposed situation the women are in, with a newborn infant and life-changing situation. Another reason might be that the women who experienced a fast recovery abstained from answering the SMS question because they had no pain to report. Hence, the falling response rate is a weakness in our study.

To describe musculoskeletal pain in the pelvic area during pregnancy the term “pelvic girdle pain” is generally preferred to “pelvic pain”. This is to emphasize that the pain is not derived from the pelvic viscera, but more likely from muscles, ligaments, and joint capsules in the pelvic area [8]. We have chosen to use the term PGP in this study. However, because our data are self-reported and obtained from an SMS question, this is in conflict with the European guidelines, which specify that the PGP diagnosis needs to be verified by specific clinical tests [5]. Nevertheless, we believe that by using the term PGP we minimize confusion regarding terminology.

The etiology for PGP is currently unknown, and the large variation in recovery patterns contributes to the belief that PGP is multifactorial. Pregnancy induces extensive biomechanical and hormonal changes to the female body, and a suggested theory is that PGP arises from the large, stabilizing muscles surrounding the pelvis [20]. After delivery, there is a sudden change in biomechanics and hormones, and for women with a quick recovery, this theory is therefore plausible.

We found multiparity to be a risk factor for either no, transitory, or incomplete recovery from PGP 6 weeks after delivery, and although this is in line with findings from other studies investigating risk factors for PGP during pregnancy [6, 21], it is not an established risk factor for persistent PGP after delivery [22].

In conclusion, 83% of women with severe or moderate PGP the final 10 weeks of pregnancy experienced a subjective substantial recovery within 6 weeks after delivery. For almost half of them, the recovery occurred already within 2 weeks. This information is of interest to affected women and to pregnancy health care providers.

AMG received an unconditional study grant from The Norwegian Research Foundation for Chiropractors (ELIB). For the remaining authors, none were declared.

None of the authors has any potential conflict of interest.

The project was registered and approved at The Norwegian National Research Ethics Committee: REK Nord 28.01.2010 with ref.nr:20107174.