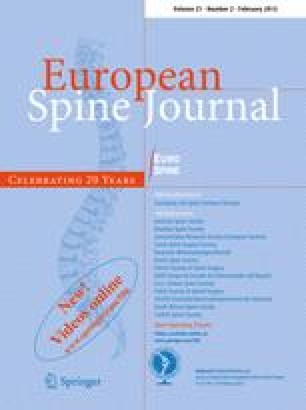 Laminotomy in adults: technique and results

The objective of this study was to describe step by step our surgical technique of laminotomy and analyze our series with regard to spinal deformities (risk and predisposing factors), postoperative pain and rate of postoperative contusions. Data regarding patients who underwent our technique of laminotomy (N = 40, mean follow-up: 52 ms) (N = 40) between 2002 and 2006 were retrospectively evaluated. The technique used is illustrated in depth. Chronic pain was present in 30% with a mean score of 3/10 cm (Graphic Rating Scale). Postoperative kyphoses occurred in three patients, all below 35 years of age and with laminotomies which involved C2 and/or C7. None of these deformities required further surgical treatment because they were self-limiting or asymptomatic at a mean follow-up of 52 months. Based on the results, our technique proved to be safe and effective in terms of late deformities, blood loss, early and chronic postoperative pain and protection from postoperative accidents over the surgical site.

The Authors are grateful to Giuseppe Nicodemo Pichierri (anatomical illustrator, nicodemo86@gmail.com) for the drawings in Figs. 2, 3, 4, 5, 6.

Supplementary material 1 (MPG 45268 kb) Cervical laminotomy: opening. After a posteriorlongitudinal skin incision, the posterior superficial cervical fascia is exposed for afew centimeters bilaterally. It can be cut unilaterally (on the same side of the tumor)and paramedian preserving the supraspinous ligament. The dissection proceeds alongthe nuchal ligament which is progressively displaced laterally. A high-speed drill isused to thin the laminae along a line which passes halfway between each spinousprocess and zygapophysial joint, where the laminotome will pass. The flap is thenelevated. It is therefore formed by the laminae, the spinous processes, the yellow andinterspinous ligaments

Supplementary material 2 (MPG 48632 kb) Cervical laminotomy: closure. Reconstruction is madeusing plates and screws. The cranial set can be used for this purpose. Attention mustbe paid to correctly shape the plates and to fix them in order not to violate thezygopophysial joints. The plates at the extremities of the flap are of utmostimportance in securing it in place but also in guaranteeing the symmetry of thelaminotomy. A deeper layer of absorbable stiches approximates the muscles fromeach side: each wiresuture crosses the interspinous ligament securing muscles andflap to one another. A more superficial muscular layer is sutured as usual. Thesupraspinous ligament is sutured to the superficial cervical fascia with a running suture

Supplementary material 3 (MPG 81910 kb) Thoracolumbar laminotomy: closure. Reconstruction ismade using plates and screws. The cranial set can be used for this purpose. Attentionmust be paid to correctly shape the plates and to fix them in order not to violate thezygopophysial joints. The plates at the extremities of the flap are of utmostimportance in securing it in place but also in guaranteeing the symmetry of thelaminotomy. The intermediate plates reinforce the fixation blocking each segmentand avoiding subsidenceof the flap: one screw per side is enough. Absorbable vicrylwiresutures reconnect the supraspinous ligament with a “Smead-Jones”-liketechnique: once positioned the suture will resemble a figure of eight. Muscles areapproximated using U-shaped stiches with their deeper branches crossing theinterspinous ligament and their superficial branches running just below thesupraspinous ligament. The thoracolumbar fascia is closed, preferably with runningsutures on each side