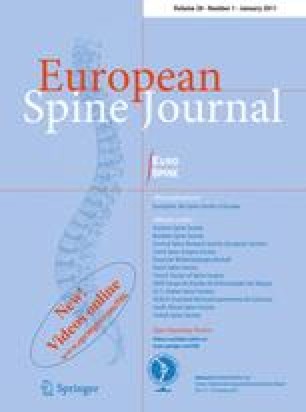 These distinct characteristics make the shape memory alloy useful in orthodontic tooth alignment, vascular applications [2, 10] and spine surgery [1, 3, 15, 16, 17]. We used a shape memory rod as a temporary tool to assist in scoliosis correction. The goal of this study was to investigate the clinical and radiographic results following the use of temporary shape memory rods in scoliosis surgery.

The diagnoses included 32 idiopathic, 3 congenital and 3 neuromuscular scoliosis. Of the 32 idiopathic patients, 4 were adults. Indications for surgery included a Cobb angle greater than 50°. The average age at the time of surgery was 17.8 years (9–34 years); 21 were female and 17 were male. Patients with prior spinal surgery were excluded. All patients were examined radiographically and clinically (Fig. 1). Cell saver was used to save blood during operation for congenital and neuromuscular scoliosis and patients with spinal osteotomy. Woke test was performed after correction for all patients, and additional somatosensory-evoked potentials was performed for patients with spinal osteotomy.

All patients underwent posterior fusion and instrumentation through a standard posterior midline incision. The soft tissue was dissected away from the bony spine in a subperiosteal fashion from the proximal to distal direction. Using anteroposterior and lateral radiographs, the ideal entry point and direction of pedicle screws were determined. The conventional fluoroscopy-based “free-hand” insertion technique was employed.

Before the operation, a preconfigured shape memory rod (usually 6 mm) was cooled in an asepsis ice bath. The predetermined shape used was that of a spine with normal coronal and sagittal alignment. Once the rod was cooled (below 4°C; the effect may be better if the rod was frozen in a refrigerator) and became malleable, it was contoured according to the shape of the spinal deformity. This allowed the rod to be easily seated in the concave pedicle screws. To ensure that the rod did not return to its preconfigured shape before it was completely seated, one surgeon filled the incision with a little crushed ice around the rod to control the local temperature. With the set screws loose and the rod in the appropriate sagittal alignment, the rod was warmed up using warm water (about 40°C). The shape memory rod returned to its predetermined shape gradually, resulting in a correction of the scoliotic deformity (Fig. 2). Concave distraction between adjacent level pedicle screws was applied to further reduce the major curve. After the correction, a permanent rigid spinal rod was fixed with anchors on the supporting side (convex side). The temporary shape memory rod was then replaced with a permanent rigid spinal rod. Additional compression and distraction were done to achieve better balance in the coronal plane. Facet decortication was performed using a high-speed burr, and facet fusion was performed with either allogenic bone graft or autogenous iliac crest bone graft.

There were no neurologic or vascular complications. Only one case of deep postoperative infection was found within 2 months after the operation, and the patient recovered following thorough surgical debridement. There were no correction-related complications, such as screw pullout, loosening or metal fracture.

Scoliosis is a three-dimensional deformity of the spine for which corrective surgery frequently is required. The goals of surgical treatment include: prevention of curve progression, correction of deformity, preservation of sagittal and coronal balance, improvement of cosmesis, preservation of pulmonary function, and minimization of morbidity or back pain [4, 7]. The correction techniques in scoliosis surgery, developed from Harrington principles of concave distraction, have evolved to include segmental realignment by rod derotation, cantilever and translation methods [6, 8, 12]. The ability to obtain greater fixation of the spine with current instrumentation has increased coronal plane deformity correction from 18% to nearly 70%, while maintaining global sagittal parameters [5, 9, 14]. Segmental pedicle screw fixation can further improve the three-dimensional correction by engaging all three columns of the spine [19], and segmental pedicle screw fixation with “direct vertebral rotation” showed better rotational and coronal correction than “simple rod derotation” [11, 13].

Current spinal corrective devices and techniques rely on forcing displaced vertebral bodies into alignment, usually by manual force, such that a rigid rod can be attached to the spine. A surgeon generally must make a compromise between the starting, deformed shape of the spine and the desired shape so that the spinal rods can be connected. The forces required to pull the vertebral bodies into alignment can be large, unevenly applied and sometimes difficult to control. Such techniques can be challenging for the surgeon especially when a large number of monoaxial pedicle screws are inserted at the apex. These procedures can lead to excessive stress on the pedicle screw resulting in screw pullout or screw damage.

Compared to rigid rod, such as stainless steel, titanium alloy or chrome cobalt-type rods, shape memory metal rod have two distinct states: austenitic and martensitic states. At low temperatures (usually below 4°C), the metal is in an austenitic state: it is malleable and can be easily contoured. This allows the rod to be seated into the deformed spine without any difficulty. Once the material is heated above its activation temperature (about 40°C, the activate point can be controlled by special technology), the shape memory material is stiff and automatically returns to its original, preselected shape. With shape memory alloy rod, the shape recovery forces were used to achieve a gradual three-dimensional scoliosis correction. Forces induce a bending moment to correct the lateral and sagittal curves of the scoliotic spine, and a torque to correct the axial rotation. Schmerling et al. [18] experimented with a shape memory metal rod to replace a standard Harrington rod in a human cadaver in the early 1970s. Lu [15] reported on surgical procedures in patients with an idiopathic scoliosis using shape memory metal rods instead of Luque rods in 1986. Wever [23] used a shape memory metal rod successfully to induce a scoliotic curve instead of correcting one in six pigs.

Undoubtedly, from a scientific point of view the permanent shape memory effect in vivo is not quite well understood. In addition, there is a fear of releasing wear debris at the junction between the rod and the anchoring system [21, 22]. In case of pseudoarthrosis, cyclic movements at the non-fused level may initiate corrosion and fretting processes, which may cause an increase in release of particulate wear debris. This was minimized since we used the shape memory rod as a temporary correction tool. The shape memory alloy rod was replaced by rigid rod at the end of correction. Therefore, this procedure takes advantage of the shape memory alloy, while minimizing its potential disadvantages.

Compared to traditional methods, shape memory metal-based correction is a novel form of scoliosis correction, in which a shape memory metal rod functions as the correcting element. By returning to its original shape (physiological curve of the spine in the sagittal plane and straight in the coronal plane), using the pedicles as points of attachment, applying both bending moment to correct the lateral and sagittal curves of the scoliotic spine and a torque to correct the axial rotation by means of external heating, a predominantly frontal scoliotic deformity is converted into a “normal” sagittal thoracic kyphosis or lumbar lordosis. This procedure includes two different, but coincident, processes: derotation and translation. So, shape memory metal rod-based correction is a three-dimensional scoliosis correction.

We have employed shape memory metal rod to correct scoliosis in pedicle construct. To gain further experience with the temporary tool, we first used it on patients with less severe scoliosis (<70°). The use of shape memory metal rod solves many of the concerns seen with more traditional techniques. The cooled rod can be contoured to easily fit the deformed spine. In addition, because this is an en bloc derotation and translation, the corrective forces are dispersed to all the pedicle screws rather than a single screw. This minimizes the concentration of stress and thereby avoids screw dislodgement and possibly minimizes operative time or blood loss.

In this study, woke test was performed after correction for all patients, and additional intraoperative somatosensory-evoked potentials was performed for patients with spinal osteotomy. We did not find significant loss of signal amplitude during the corrective phase. The reason may be owing to the characters of the shape memory alloy-based correction that it is a gradual correction rather than an acute one.