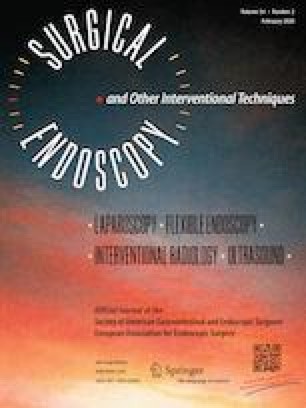 The aim of this study was to compare the outcomes of laparoscopic appendectomy (LA) using purse string invaginating sutures (PS) with those using intracorporeal knotting (IK) or Hem-o-lock polymeric clips (HL).

Based on our results, purse string suture failed to demonstrate better postoperative outcome in laparoscopic appendectomy and is no longer recommended by our institution as initial approach.

Recently, laparoscopy is commonly used in abdominal emergencies like acute appendicitis [1]. It has been shown that laparoscopic appendectomy (LA) has a lot of advantages as compared with open approach technique, including faster recovery, shorter hospital stays and lower percentage of surgical site infections [2]. There are several techniques to close appendicular stump during LA. However, a consensus about the optimal technique of the appendicular stump closure still seems unclear. There are several ways to close the stump of appendix, such as endo-loop, Hem-o-lock polymeric clips, intracorporeal knotting and even purse string suture. Purse string suture was a traditional procedure performed in open appendectomy. There are studies which did not argue in favour of purse string suture [3, 4, 5]. Nevertheless, its role in LA has not been examined due to its demanding technique. The aim of this study was to compare the outcomes of LA using purse string invaginating sutures (PS) with those using intracorporeal knotting (IK) or Hem-o-lock polymeric clips (HL).

Medical records of patients who underwent laparoscopic appendectomy from 1st January 2015 to 30th December 2017 at Jiangsu Province Hospital, the First Affiliated Hospital of Nanjing Medical University were retrospectively analysed. Patients who were younger than 14 years old, had concomitant surgery other than appendectomy, or had converted to open surgery, were excluded. 882 patients were identified and included in this study. All the subjects had been clinically diagnosed, met the indications for surgical treatment and signed the informed consent forms. All operations were performed by attending surgeons or senior residents who were experienced in laparoscopic appendectomy. The choice of surgical procedure for stump closure was determined by the surgeon’s preference.

After discharge, the patients were followed-up at the outpatient department at 1-week interval for estimation of complications and full recovery. Their postoperative outpatient records were reviewed, and telephone interviews were further carried out to ensure at least a follow-up period length of 6 months. Of the 882 patients, 732 responded to the telephone interview, 95 patients were tracked in their postoperative outpatient records, 55 patients (6.23%) were lost to follow-up. Any related complications that occurred during this postoperative period were included in the analysis. This study was approved by hospital institutional review board.

Prior to surgery, all the patients received one dose of second-generation cephalosporin for antibiotic prophylaxis. Laparoscopic appendectomy was performed using classic three port technique. Prior to inserting the trocar, a Foley catheter was inserted into the bladder. A 10-mm trocar (Johnson and Johnson’s, USA) was then inserted under the umbilicus using the open technique. Pneumoperitoneum was applied with carbon dioxide (CO2), and intra-abdominal pressure was fixed at 10–12 mmHg. Next, a 5-mm trocar was inserted into the suprapubic area before applying a 10-mm trocar to the right iliac fossa under direct vision. A rigid 30 degree 10-mm laparoscope and standard rigid 5-mm laparoscopic instruments were used. Patients were placed in reverse Trendelenburg position with left tilt. Distal ileum was pushed to the left side of the abdomen to help expose the appendix. After the appendix became visible, it was lifted from the mesoappendix. A hole was made in the mesoappendix and an absorbable clip was applied through before dividing the artery. The base of appendix was managed as described below.

In the case of intracorporeal knotting, a 3/0 vicryl string (Johnson and Johnson’s) was passed around the base of appendix, two square knots were made intracorporeally to ligate the appendix. The distal part of the appendix was resected 0.5 cm distal to the knots. The specimen was removed through the 10 mm trocar using a laparoscopic endo-bag (Fig. 1A).

In the case of purse string suture, two intracorporeal knots were made at the base of appendix and the appendix was resected as described above, leaving the stump of the appendix. Then, a purse-string suture by 3/0 vicryl was made 1.0 cm around the base of the appendix. When the first knot was formed but not secured, two ends of the string was lifted by the grasper through the 10 mm trocar, the other grasper through the 5 mm trocar then pushed the stump into the cecum. Once the stump was fully invaginated into the cecum, the first knot was secured. Then, the second knotting was made to finalise the purse-string suture (Fig. 2).

After removal of the specimen, abdominal lavage, using saline and drainage, was performed by the surgeon’s judgement. After the operation, patient received continuous antibiotics before discharge and could have liquid diet if tolerated. Patients were discharged once their body temperature and white blood cell count returned to normal and can tolerate normal diet.

Statistical analysis was performed using the statistical software package SPSS 21.0. Calculated data was represented by “mean ± SD”. The anova and t test was used for comparison between the groups; the count data use case number (n) indicates and the comparison between the count data group rate (%) was performed using the χ2 test or Fisher’s exact test, and the two-sided test level was set to be α = 0.05. The difference was statistically significant at p < 0.05.

Eight hundred and eighty-two patients were included in this study. Among them, 458 were females and 424 were males. They were divided into three groups based on the techniques of stump closure. There were 538 patients in the purse string suture group (PS), 229 in the intracorporeal knotting group (IK) and 115 in the Hem-o-lock polymeric clips group (HL). Their demographic characteristics are summarized in Table 1.
Table 1

bGomes Score: the appendix was graded as to different levels based upon its visual appearance: grade 0 (normal looking), 1 (redness and edema), 2 (fibrin), 3a (segmental necrosis), 3b (base necrosis), 4a (abscess), 4b (regional peritonitis), and 5 (diffuse peritonitis)

The most frequently used surgical techniques to close the stump during LA are an intracorporeal knotting (IK), Hem-o-lock polymeric clips (HL) and purse string suture (PS) [7, 8]. However, it has been stated by prospective studies and meta-analysis that these techniques do not show any significant superiorities to each other in terms of surgery time, pre-operative and postoperative complication rates and length of hospital stay [9, 10]. In our study, we failed to show that PS was superior to IK or HL techniques in terms of complication rate and infection rate. We found purse string suture increased the rate of wound infection, especially among uncomplicated appendicitis. The confidence interval overlaps the null hypothesis so the p value would be insignificant, but the actual magnitude of the interval demonstrates that in fact most of the interval lies above the null, showing how PS technique is not recommended for this specific reason.

Despite of the retrospective nature of this study, most factors among the groups for uncomplicated appendicitis were comparable. The only few differences were that patients in the PS group had the lowest ASA score and shortest hospital stay. The topic of the use of shortened postoperative antibiotic may cause more incisional infection, is still under debate [11]. Yet, single-dose prophylaxis or prophylaxis ending within 24 h after operation is recommended by guidelines. Prolonged postoperative dosing of antibiotics does not provide additional benefits and is associated with increased risk of adverse events and induction of antimicrobial resistance [12]. The application of purse string suture with invagination into cecum to close appendicular stump during LA is much more demanding and requires some experience in laparoscopic sewing [13]. In some severe cases, purse string suture was even not applicable due to oedema of the cecum. Yet, our study failed to show that purse string suture provides any improvement in terms of intra-abdominal infection.

In the IK group, we observed a higher rate of drainage and longer hospital stay. This may be attributed to the low confidence of surgeons about security of the knotting. Indeed, it has been suggested to surgeons in a study by Gonenc et al. [14], to perform the IK technique to close the appendix stump in LA with an experienced surgeon on first cases [9, 10, 14, 15]. Moreover, studies have shown that the usage of drains have prolonged hospital stays [16, 17].

The Hem-o-lock polymeric clips technique was found to be feasible, safe, and cost-effective ligation technique of the appendicular stump [18, 19, 20, 21]. Nevertheless, the safe use of Hem-o-lock polymeric clips is significantly limited by the maximum diameter of the closing appendix of 10 mm. Usually the inflamed appendix is thicker which may create difficulty in their application [4]. As it is the case in our study, its usage was limited in 13.0% of patients in our cohort. However, the Hem-o-lock clips technique provided the similar results compared to the intracorporeal knotting and purse string suture.

In addition, studies have shown that there has been no intraoperative complications and no mortality among the three groups of patients [13, 14, 22, 23, 24, 25]. However, in our study we did have mortality in the PS group of patients which did not guarantee its’ safety.

This retrospective study has several limitations. First, our study was not prospectively designed. 6.23% out of the total number patients were lost to follow-up though they were evenly distributed among the groups (data not shown). The groups were not homogeneously divided to be compared with each other. As a teaching hospital, most of the studied cases were performed by senior residents and junior surgeons. Despite the effort to include surgeons who had performed at least 25 LA, surgeons who were included in our study were heterogeneous in their experiences and judgements. This may explain higher infection rates in the complicated cases in this study. Thus, further study which only include few senior surgeons are needed. Second, as required by hospital and insurance policy, LA with endo-loop or staple was not performed in our hospital and therefore not included in this study. Lacking such a data may further prevent comparing results with studies including those methods. Nevertheless, our study showed similar results compared to those with IK and Hem-o-lock techniques.

Written informed consent was obtained from the patients. The Ethics Committees of the First Affiliated Hospital of Nanjing Medical University approved the study.