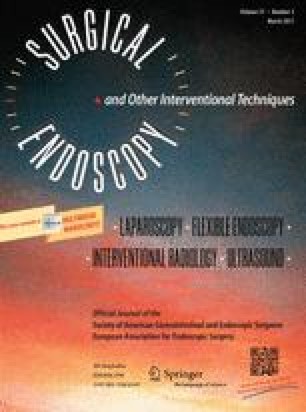 IRB approval and informed consent have been obtained. A dissection is conducted to separate the descending mesocolon of the Gerota’s plan from the medial aspect to the peritoneal lining to the left parietal gutter. The peritoneal layer is incised parallel to the vessel and close to the colonic wall. The dissection is continued anteriorly up to reach the resected parietal gutter. A passage into the mesentery of the upper rectum is created for the allocation of the stapler and the dissection of the rectum. These maneuvers permit to straighten the mesentery simplifying the identification and cutting of the sigmoid arteries. A caudal-to-cranial dissection of the mesentery is performed from the sectioned rectum to the proximal descending colon by a sealed envelope device. It can be very useful to mobilize the colon in any direction: laterally, medially, or upward. The dissection is performed along the course of the vessel up to the proximal colon, with progressive sectioning of the sigmoid arterial branches. The specimen is extracted by a pfannenstiel incision. The anastomosis is performed transanally with a circular stapler according to Knight–Griffin technique.

We performed a laparoscopic segmental colectomy using this approach for 21 patients with benign sigmoid lesions: 13 diverticulitis, 3 flat polypoid lesions (no lift-up sign), and 5 bowel endometriosis. The mean operative time and blood loss were 161.4 ± 15.7 min and 50 ± 40 ml, respectively. There were not a single conversion to open surgery and no any leakage or stricture. Only 2 cases of intraluminal bleeding and 1 case of wound infection (treated conservatively) were observed.

We consider this approach to be safe and useful for segmental colectomy to be performed sectioning the sigmoid artery close to the colonic wall.

Marco Milone and Francesco Milone have no conflicts of interest or financial ties to disclose.