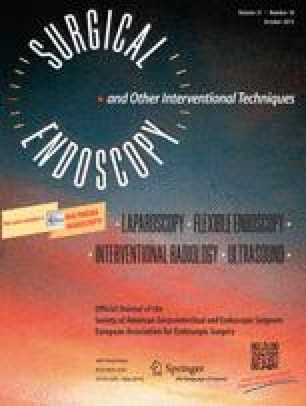 We present a full-thickness esophagotomy while performing POEM and repair using an endoscopic suturing device.

An inadvertent full-thickness esophagotomy was created while performing the mucosotomy on an inadequate submucosal wheal. We were able to resume the POEM technique at the initial esophagotomy site. There was a discussion to convert to laparoscopy. However, as we succeeded in creating the tunnel, we continued with the POEM technique. After the selective myotomy was completed, we used an endoluminal suturing device (Overstitch, Apollo Endosurgery, Austin TX) to close the full-thickness esophagotomy in two layers (muscular, mucosal). A covered stent was not an option because the esophagus was dilated, which precluded adequate apposition. The patient had an uneventful postoperative course. At 9-month follow-up, had excellent palliation of dysphagia without reflux.

This case demonstrates the importance of identifying extramucosal intrathoracic anatomy, thus emphasizing the need for an experienced surgeon to perform these procedures, or at a minimum to be highly involved. Raising an adequate wheal is crucial before mucosectomy. Inadequacy of the wheal may reflect local esophageal fibrosis. If this fails at multiple locations in the esophagus, it may be prudent to convert to laparoscopy. This case also demonstrates the need for advanced flexible endoscopic therapeutic tools and a multidisciplinary approach to manage potential complications.