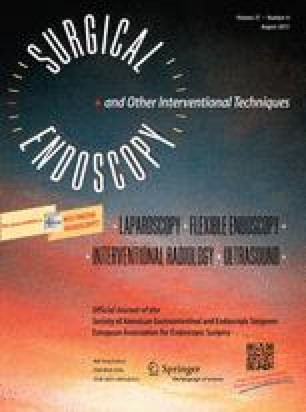 A 75-year-old female patient with a type III hiatal hernia was submitted to laparoscopic mesh hiatoplasty. Soon after the last suture fixed the mesh to the left crura, a hemorrhage was observed. Conversion to open surgery was not performed. The most common sources of bleeding (liver, phrenic arteries, crura, spleen, and short gastric vessels) were discarded as the cause of the hemorrhage. The mesh was set free in order to explore the lower mediastinum. The source of the hemorrhage was identified: it was the last suture fixing the mesh to the left crura, which was found passing through the aortic wall. The hemorrhage stopped as soon as the suture was removed. When facing a hemorrhage during this kind of surgery, it is essential to be methodical to discover the source of the bleeding. First of all, the most common sources of bleeding must be checked out. Injury of the inferior vena cava must also be ruled out, because it is an uncommon but potentially lethal complication. Afterwards, the lower mediastinum must be explored. Conversion to an open approach is needed if the patient becomes unstable or the surgeon does not have enough laparoscopic skills to find and solve the bleeding. Most of the reported cases of aortic injury during laparoscopic hiatoplasty are secondary to vascular injuries during port insertion. When a suture is the cause of bleeding, the removal of the stitch should be enough to stop the bleeding. If there is a tear of the aortic wall, a patch should be employed for the repair. In conclusion, left crura and thoracic aorta are very close to one another. The surgeon must be very careful when working near the left crura, mostly in old patients with a dilated and aneurysmatic aorta.