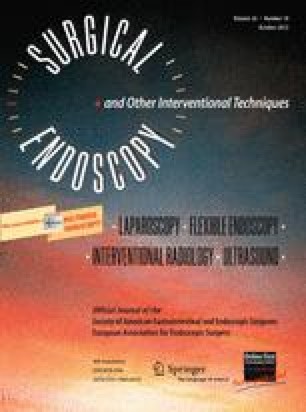 The number of cases of laparoscopic surgery has been increasing. Lymph node dissection has been standardized, and the enlarged view provided by laparoscopes allows for the procedure to be performed successfully entirely within the abdominal cavity, but many cases of reconstruction using the Billroth-I method are performed under direct vision through a small incision. In this study, by placing an anchor thread on a suture line on the lesser curvature of the stomach, we simplified the procedure for handsewn anastomosis and safely performed gastroduodenal anastomosis at low cost to obtain good results.

We performed this anastomotic procedure in 18 patients with early gastric carcinoma. The mean time required for the anastomosis was 64.6 ± 17.1 min, and the estimated blood loss was 53.1 ± 91 g. All operations were curative, and the mean number of retrieved lymph node was 27.1 ± 10.8. A nasogastric tube was removed on the first or second day. An upper gastrointestinal series performed on postoperative days 5–6 showed no anastomotic leakage and normal transit. Oral intake was started on days 6–7. Postoperative complications included one case of a ruptured suture, but this was resolved through a conservative approach. There was no mortality. Postoperative endoscopy revealed that the anastomosis area was extremely soft, and no abnormalities were observed. Moreover, the only costs related to the anastomosis were for the thread and needles, and although more time was required compared with mechanical anastomosis, the cost was extremely low.

We performed gastroduodenal anastomosis under a total laparoscopic approach by handsewn. This method is economical, because it does not require the use of machinery for anastomosis, and the duodenal stump is short. We believe that this method, which can be performed in a similar manner even for obese patients, can be used as a standard method of anastomosis.

A Billroth-I gastrectomy was performed and followed by a handsewn gastroduodenostomy, so Billroth-I anastomosis with handsewn sutures has been widely accepted until now. However, in recent years, laparoscope-assisted surgery for early cancer has been increasing, and in a laparoscopic distal gastrectomy, the method in which a small incision is made at the time of reconstruction is common, which is referred to as laparoscope-assisted surgery [1, 2]. There are various methods of anastomosis for performing mechanical anastomosis entirely within the abdominal cavity, and each method requires at least three or six automatic suture devices [3, 4, 5]. Handsewn anastomosis under a total laparoscopic approach was first reported by Takiguchi et al. [6], but due to the large amount of time required for anastomosis and the complexity of the procedure, it is currently not widely performed. In this study, by improving the procedure and placing an anchor thread on a suture line on the lesser curvature of the stomach, we were able to perform handsewn anastomosis easily and entirely within the abdominal cavity and we safely performed handsewn gastroduodenal anastomosis at a low cost to obtain good results. We herein report our findings.

From January 2009 to December 2010, we performed handsewn gastroduodenal anastomosis in 18 cases (10 males and 8 females) at our facility. Before surgery, we prepared images of the angioarchitecture of the celiac artery by conducted gastric endoscopic examinations, gastric fluoroscopy, and three-dimensional CT examinations.

The patient was fixed in a supine position with her legs spread and her head elevated. A trocar was inserted into the upper part of the umbilicus using an open method to observe the inside of the abdominal cavity using the pneumoperitoneum method. Six ports were inserted into the abdomen. We determined the position of the port by considering the fact that the gastroduodenum would be sewn by hand (Fig. 1). First, we targeted the gastroduodenum and performed lymph node dissection inside the abdominal cavity. The duodenal bulb and the gastric corpus were separated by using an endoscopic stapling device. Samples were extracted using a large plastic bag after extending the umbilical wound to 3 cm and fixing a drape for the wound margin.
For reconstruction, the stump of the greater curvature of the remaining stomach and the duodenal stump were anastomosed entirely through handsewn suturing. At the time of the anastomosis, the scope was moved to the 12 mm trocar in the lower right abdomen in consideration of hand-eye coordination (Fig. 2). Intracorporeal handsewn anastomosis was performed from the right side using two sets of forceps. First, a 3-0 absorbing thread (120 cm) was placed in the lesser curvature as a supporting thread. Next, a seromyotomy of the stomach was performed (Fig. 3). For the posterior wall, the gastric seromuscular layer and the duodenal seromuscular layer were sewn with four stitches using 3-0 absorbent thread (120 cm) using an extracorporeal ligation method to repair the stomach and the duodenum (Fig. 4). Next, the duodenal stump and the remaining gastric stump were resected by using an ultrasonic activated device, and each lumen was opened by pulling the supporting thread in the lesser curvature (Fig. 5). Regarding anastomosis of the posterior wall, all of the gastric layers and all of the duodenal layers were consecutively sutured from the lesser curvature side in the direction of the greater curvature using 3-0 coated polyglactin (17 cm) by continuous suture (Fig. 6). Similarly, for the anterior wall, all of the gastric layers and all of the duodenal layers were consecutively sutured from the lesser curvature side using 3-0 coated polyglactin (17 cm). The intraabdominal Billroth-I anastomosis is then accomplished (Fig. 7). All of the threads were fixed by performing intracorporeal or extracorporeal knot tying. The intra-abdominal Billroth-I anastomosis is then accomplished. The field of vision in the tangential direction can be improved by pulling the lesser curvature of the stomach toward the abdominal wall with anchor suture threads.

We performed this anastomotic procedure in 18 patients with early gastric carcinoma. The mean time required for the anastomosis was 64.6 ± 17.2 (range, 35–97) minutes, and the estimated blood loss was 53.1 ± 91 g. All operations were curative, and the mean number of retrieved lymph nodes was 27.1 ± 10.9 (range, 11–52; Fig. 8). A nasogastric tube was removed on the first or second day. An upper gastrointestinal series per formed on the postoperative days 5–6 showed no anastomotic leakage and normal transit (Fig. 9). Oral intake was started on days 6–7. One patient developed anastomotic leakage and was treated conservatively. With a mean follow-up of 9.1 (range, 1–19) months, no one suffered from symptoms indicative of anastomotic stenosis, bile reflex, or dumping. There was no mortality.

Postoperative endoscopy revealed that the anastomosis area was extremely soft, and no abnormalities were observed (Fig. 9). Moreover, the only costs related to the anastomosis were for the thread and needles, and although more time was required compared to mechanical anastomosis, the cost was extremely low. The mean duration of hospitalization after surgery was 21.7 (range, 11–37) days.

Laparoscopic surgery is understood as a very minimally invasive procedure in the various fields of surgery. Total laparoscopy is close to being the established procedure for laparoscopic lymph node dissection, particularly for treating gastric cancer. However, it is difficult to say that methods for reconstruction after resection have reached a level similar to laparotomy. Complications of LADG, including hemorrhage, intraperitoneal abscess, pancreatic fistula, ileus, respiratory complications, and wound infection, account for up to 1%, whereas complications regarding reconstruction for ruptured sutures and stenosis of the anastomotic part, etc., account for 1 to 6% [7, 8, 9, 10, 11, 12]. This indicates the difficulty of performing anastomosis in laparoscopic surgery.

In endoscopic surgery, the method of performing a handsewn gastroduodenostomy by making a small incision in the upper abdomen after a distal gastrectomy is commonly performed [1, 2]. However, in recent years, anastomosis using automatic suturing instruments has been mainly used for Billroth-I intracorporeal anastomosis, including a square suturing method[13] developed by Tanimura et al. [14] a hand-assisted method [14, 15, 16], an overlap method[4] developed by Uyama et al. [3] and δ anastomosis reported by Kanaya et al. [2].The disadvantages of mechanical anastomosis are characterized by the fact that it is affected by the degrees of freedom of the duodenum and that many automatic suturing instruments (namely 3–6) are used. However, the anastomotic opening is large, the procedure is simple, and the duration of anastomosis is short.

Since Taniguchi et al. [15] reported a case of intraperitoneal anastomosis under a total laparoscopic approach, there have been no reports of laparoscopic handsewn anastomosis [1, 14]. Handsewn gastroduodenal anastomosis has been avoided due to the complicated nature of the procedure. However, in recent years, high-definition laparoscopes have become widespread, and the enlarged views obtained with these laparoscopes have reduced the stress experienced by operators. Furthermore, the field of vision in the tangential direction can be improved by pulling the lesser curvature of the stomach toward the abdominal wall with anchor suture threads, and handsewn gastroduodenal anastomosis can be performed safely by adjusting the position of the port. Furthermore, handsewn sutures were not affected by the degree of freedom of the duodenum, and during anastomosis, due to the pneumoperitoneum pressure, there was almost no leakage of digestive fluid into the abdominal cavity. The postoperative endoscopy and the findings of fluoroscopy performed using a water-soluble contrast agent revealed that, because suturing instruments based on staplers were not used, the anastomosis area was soft and highly flexible, and it was believed that there was little stenosis of the anastomosis area after surgery. Although there are reports that laparoscopic surgery requires a shorter duration of hospitalization and is more economical and superior to abdominal surgery [15], because many instruments are used for anastomosis, it is not always economically superior. However, although handsewn anastomosis involves a high level of technical difficulty and many problems, including the need to perform knot-tying procedures, such as extracorporeal knot-tying and intracorporeal knot-tying, the stress experienced by operators can be reduced by using a high-definition laparoscope. Moreover, there are many advantages to handsewn anastomosis, including the absence of use of instruments for anastomosis and the safety of the procedure. Furthermore, cosmetically, a small 3 cm incision in the umbilicus is sufficient for extracting the stomach. We have treated 18 cases at our hospital, and although time was required to perform handsewn gastroduodenal anastomosis in the early cases, it is believed that the surgery time can be reduced if the procedures for anastomosis are standardized [16, 17, 18]. We plan to study and report further cases in the future.

Anastomosis for a laparoscopic distal gastrectomy was intracorporeally performed with no use of automatic suturing instruments. By making adjustments to these procedures, anastomosis can be performed at a level substantially similar to conventional abdominal surgery. Moreover, although we have only treated 18 cases, it is believed that handsewn anastomosis is a useful option for laparoscopic Billroth-I reconstruction considering both cost and safety.