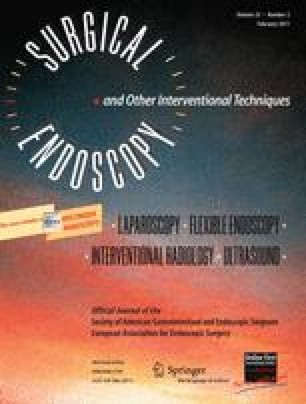 Laparoscopic surgery via a single port is an evolving technique being applied to an increasing variety of operations [1]. Multiple series over the past 3 years have shown single-incision laparoscopic cholecystectomy to be feasible and safe [2]. The ergonomic difficulties of single-port laparoscopy include a loss of instrument triangulation and operation with camera and instruments in parallel. Many different modifications of techniques and equipment have been used to compensate. Single-port techniques have been applied by a few authors to laparoscopic nephrectomy [3], splenectomy [4], and obesity surgery [5, 6]. Laparoscopic liver resection is well established and shown to be safe in multiple series [7]. The laparoscopic approach is accepted as the gold standard for resection of segments 2 and 3 [8]. To the authors’ knowledge, no reports of laparoscopic liver resection via a single port have been published. They report the use of their technique for single-incision laparoscopic left lateral segmentectomy in a patient with a solitary segment 2 colorectal liver metastasis. The authors maintained strict oncologic principles and adhered to their standard laparoscopic technique as far as possible. They used a TriPort (Advanced Surgical Concepts, Wicklow, Ireland) placed via a 12-mm incision at the umbilicus. Following diagnostic laparoscopy and intraoperative liver ultrasound, hepatic attachments were divided using electrocautery. Parenchymal transection and vascular control were achieved using an ultrasonic dissector and laparoscopic staplers. Standard straight laparoscopic instruments were used. A number of technical challenges were apparent. Movement of instruments was jerky at times, either because instruments were clashing with one another other or deflecting the camera. The multiport device can be stiff, requiring copious lubrication throughout surgery. Crossing hands facilitates internal triangulation of the operating instruments to allow retraction or to apply tension, for example, during the division of hepatic attachments. Control of minor hemorrhage is possible with judicious and patient application of pressure using small pieces of surgical gauze. An articulating laparoscopic stapler is useful to achieve the ideal angle of staple deployment during transection of vascular pedicles. The specimen was extracted by extending the umbilical incision. No complications occurred. The patient was able to resume an oral diet and full mobility free of opioid analgesia on the first postoperative day. The resection margin was clear. This video demonstrates that the authors’ technique is feasible and oncologically safe for selected patients requiring liver resection.