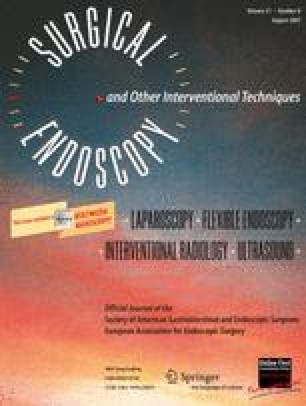 The use of laparoscopy has been described as the means of removing intraabdominal foreign bodies, both intraperitoneal and intraluminal, from the stomach or bowel. An early report detailed the laparoscopic removal of translocated intrauterine devices from the peritoneal cavity [2]. Laparoscopic removal of a retained surgical sponge also has been reported [1]. For large ingested objects that cannot be retrieved by flexible endoscopy, laparoscopic gastrotomy and foreign body removal have been described [3] . The authors recently had three cases of laparoscopic foreign body retrieval. The first case involved a young man who had ingested latex gloves, causing gastrointestinal bleeding. Endoscopic retrieval was unsuccessful. A laparoscopic gastrotomy was performed, with the retrieval of four gloves, followed by intracorporeal, sutured closure of the gastrotomy. The second case involved the laparoscopic removal of a Penrose drain around the distal esophagus. The patient had initially undergone a laparoscopic Nissen fundoplication, vagotomy, and gastrojejunostomy for the management of reflux and a duodenal stricture. He had persistent dysphagia after surgery, prompting takedown of the fundoplication several months later. When his dysphagia did not improve, a retained Penrose drain that had been placed around the distal esophagus at the initial operation was discovered on computed tomography. This was removed laparoscopically. At this writing, 18 months after the initial operation, the patient has complete resolution of dysphagia. The third case involved a duodenojejunal fistula caused by multiple ingested magnets that had eroded through the bowel wall. The fistula was divided laparoscopically, and 16 disk-shaped magnets were removed. The duodenum and jejunum were repaired with laparoscopic suturing and stapling. All three patients did well after surgery. Laparoscopy can be an excellent method for abdominal foreign body retrieval.