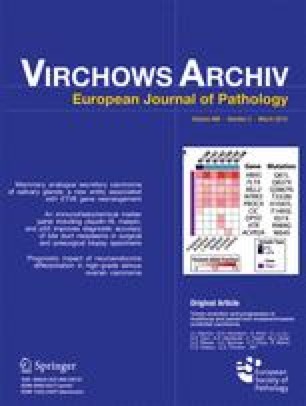 We read with interest the article by Paniz-Mondolfi et al. [1]. They used high-depth next-generation sequencing of 47 cancer-associated genes in order to assess the mutational landscape of cutaneous carcinosarcoma (CCS) and to investigate whether the epithelial and mesenchymal components share the same genetic signature. In CSS with an epithelial component consisting of squamous cell carcinoma, various point mutations and deletions in the TP53 gene were found, while CSS with an epithelial component consisting of basal cell carcinoma was characterized by a more complex mutational landscape involving a variety of genes. When microdissection could be performed, all components of the tumour contained identical mutations. These results support the hypothesis that CCS is a monoclonal neoplasm arising from a single stem cell, undergoing divergent differentiation into different cell lineages.

The authors also speculated that epithelial-mesenchymal transition (EMT) is involved in...

Spindle Cell Basal Cell Carcinoma Adherens Junction TP53 Gene Carcinosarcoma
These keywords were added by machine and not by the authors. This process is experimental and the keywords may be updated as the learning algorithm improves.
This is a preview of subscription content, log in to check access.