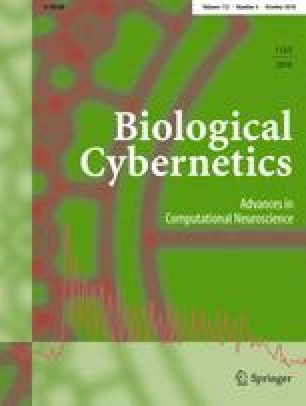 Application of chaos in a recurrent neural network to control in ill-posed problems: a novel autonomous robot arm

Inspired by a viewpoint that complex/chaotic dynamics would play an important role in biological systems including the brain, chaotic dynamics introduced in a recurrent neural network was applied to robot control in ill-posed situations. By computer experiments we show that a model robot arm without an advanced visual processing function can catch a target object and bring it to a set position under ill-posed situations (e.g., in the presence of unknown obstacles). The key idea in these works is adaptive switching of a system parameter (connectivity) between a chaos regime and attractor regime in a neural network model, which generates, depending on environmental circumstances, either chaotic motions or definite motions corresponding to embedded attractors. The adaptive switching results in useful functional motions of the robot arm. These successful experiments indicate that chaotic dynamics is potentially useful for practical engineering control applications. In addition, this novel autonomous arm system is implemented in a hardware robot arm that can avoid obstacles and reach for a target in a situation where the robot can get only rough target information, including uncertainty, by means of a few sensors, as indicated in the appendix, A1 and A2.

This work was supported in part by Grant-in-Aid #26280093 of the Ministry of Education of Science, Sports & Culture of the Japanese government and by the Cooperative Research Program of the Network Joint Research Center for Materials and Devices.

Appendix A Hardware implementation trial for a single-arm system

Appendix A1 Preparation of our hardware system

The block diagram of our hardware system is shown in Fig. 19. In our study, an robot arm with sensors was constructed using a robot arm from R.T. Corporation, which was adapted by us so as to have five degrees of freedom; the result is shown in Fig. 20.

The length of the arm is too short to carry out our plan with regard to arm behaviors, so the arm was adapted using appropriate aluminum plate bars and, instead of the original version, the stronger servomotors were installed, as shown in the figure. Nonetheless, the rotation freedom of the wrist was not implemented because of a few technical difficulties at this stage, in particular due to too much heavy load on the servomotor of the robot arm shoulder.

In our theoretical simulations, a recognizing cone region with a certain steradian range is introduced at the front edge of the arm, whose axis faces the forward direction of arm edge motion at the most recent time step (Fig. 10). Thus, a sensor is necessary whether or not the target exists within the cone region. Simplifying this condition, we set three semiconductor optic sensors (ST-1KB, sensing peak wavelength: 800 nm, KODENSHI SY CORP.) at the edge of the fingers, each of which has a rather wide area for detecting light (Fig. 21). An incandescent light bulb (KR100V90WCA, Toshiba) was used as the target lamp.

As the main theme of this work, we consider the arm system as having six degrees of freedom. However, in the hardware implementation in this appendix, let us confine ourselves to five degrees of freedom, in which the freedom of a rotatable and bendable wrist is replaced by a fixed one, for the following reason. When we introduce a movable wrist, we must attach a servomotor for the wrist, then the total weight of the hand ahead of the shoulder increases rather dramatically, and no strong enough servomotor could be found to control the shoulder.

As noted in the previous section, we must place an obstacle between the target and the robot arm. We employ a system in which contact signals between arm and obstacle are generated on the side of the obstacle. As our obstacle, we choose a rectangular plate; called a touch panel, it can detect when contact is made with an object by a change in the electric sheet resistance when an unknown object makes contact by applying a little pressure on the surface. Furthermore, a narrow aluminum sheet is attached on all side edges of this plate, and the appropriate electrical voltage is applied between the sheet and the arm to detect the side edge contact of the arm. The plate before setting is shown in Fig. 22

Appendix A2 The results of hardware action trials

In the actual action trials, based on the many problems generated by technical restrictions, we changed slightly the algorithms or conditions theoretically given in the main text, where we discard their description one by one. However, the principle and aims proposed in this paper are strictly retained. First, we show the successive snapshots in the process of reaching for the target in the case without obstacles in Fig. 23. Second, we show the case with an obstacle in Fig. 24.