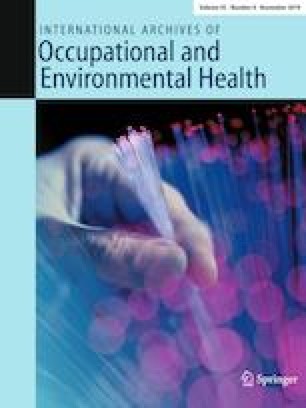 The present study examined a possible association between occupational exposure to noise, working and living in cold conditions, and the risk of mortality in myocardial infarction and stroke.

The present cohort study consists of 194,501 workers in the Swedish construction industry that participated in health examinations between 1971 and 1993. Noise exposure was defined on a job-exposure matrix based on a survey of the working conditions carried out during the mid 1970s. All workers were categorised into three main regions of Sweden, differing in temperature: Reference (Götaland), colder (Svealand), and coldest (Norrland). Relative risks (RR) were analysed by negative binomial regression adjusting for age, BMI, and smoking habits.

The study indicates an interaction between working at hazardous noise levels and living and working in cold conditions for increased mortality in myocardial infarction.

Some studies indicate that occupational noise has non-auditory effects on the cardiovascular health such as increased risks of hypertension, coronary heart disease, and stroke (Dzhambov and Dimitrova 2016; Skogstad et al. 2016; Theorell et al. 2016). Several studies have found that living in cold climate or cooling of the body increases mortality in cardiovascular disease (Analitis et al. 2008; Gasparrini et al. 2015; Song et al. 2017). To our knowledge, there is no study on a possible interaction of occupational noise and working in cold conditions on the risk of cardiovascular disease. It is suggested that occupational noise acts as a stressor on the autonomic and endocrine system, which affects risk factors for cardiovascular disease such as increased blood pressure or increased blood viscosity (Basner et al. 2014; Walker et al. 2016). The underlying mechanisms between cold temperatures and mortality are not entirely clear. Cold stress activates the sympathetic nervous system and the endocrine system, and may cause cardiovascular stress by increasing blood pressure, blood viscosity, and vasoconstriction (Analitis et al. 2008; Gasparrini et al. 2015). Cold exposure in laboratory setting is associated with increased blood pressure and heart rate changes, but the effects depend on the type of cooling, part of body cooled, and individual factors (Emmett 1995; Korhonen 2006). Working in extreme cold, such as in cold storage units, is associated with hypertension (Kim et al. 2003).

This cohort study consists of workers in the Swedish construction industry that participated in health examinations between 1971 and 1993. The analysis was restricted to men with normal blood pressure at the first health examination.

There are 389,132 workers in the cohort and 19,418 of them are female. There were few women with high noise exposure (n = 99) and 30% of the women had no defined exposure level. Therefore, it is not feasible to include women in the analysis.

Workers below 15 or above 67 years of age at their first health examination were excluded. The retirement age in Sweden was 67 years until 1976 when it was decreased to 65 years.

During the health examinations between 1971–1974 and 1988–1993, the workers answered a questionnaire regarding their working conditions and their health status. Data collected from the health examinations included the region where the examination took place and occupational title. Individual data such as height, weight, tobacco use, and blood pressure were also gathered.

The BMI for all participants were calculated by dividing the weight with the square of the participant’s height. The BMI categories used were 18.5 ≤ BMI < 25 and 25 ≤ BMI < 35 kg/m2. Construction workers with BMI over 35 or under 18.5 were excluded, as were workers with missing data for calculation of BMI.

There were 12 different regions in Sweden where the construction workers had their first health examination. These regions were categorised into three main regions of Sweden, representing reference (Götaland), colder (Svealand), and coldest region of Sweden (Norrland). The number of days per year with a daily mean temperature (and standard deviation) below 0 °C from 1970 until 2010, for each region, were on average 67 (21), 80 (18), and 133 (13) days based on data from the Swedish Meteorological and Hydrological Institute (SMHI) (SMHI Open Data [Internet]. Swedish Meteorological and Hydrological Institute (SMHI).[cited 2016 Dec 7]. Available from: https://www.smhi.se/en).

Negative binomial regression was used to quantify any association between the exposure (noise and cold conditions) and the studied outcomes (myocardial infarction and stroke) among workers with normal blood pressure. Negative binomial regression is an alternative to using quasi-Poisson regression for over-dispersed count data and is similar to Poisson regression. Model performance was assessed using χ2-tests on the model residuals, and normal QQ-plots to spot any deviance from the normal distribution.

For the analysis of myocardial infarction and stroke, person-years were calculated from inclusion to the cohort to event or censoring. A person was censored when they died, emigrated, or turned 85 years old, or at the end of follow-up in 2010.

Potential confounders included in the analyses were age, BMI, and smoking status gathered at the workers’ first health examination. For the analysis of an association between myocardial infarction and stroke mortality with noise exposure we adjusted for cold exposure using region. When analysing the association of myocardial infarction and stroke mortality with cold exposure we used the three main regions as exposure variable and adjusted for noise exposure. To keep track of changes in the association between exposure and outcome, the initial model was unadjusted and then the potential confounders were introduced individually. The final model included all potential confounders. A possible interaction of noise and region (cold exposure) on mortality of myocardial infarction and stroke was analysed by including an interaction term in the final adjusted model.

Interaction analysis of the different regions of Sweden and noise exposure levels on mortality from myocardial infarction and stroke of male construction workers with normal blood pressure adjusted for age, BMI and smoking habits

This study has several advantages. It has a prospective design and a large number of workers, leading to rather high power for the analysis of cold and noise exposures association and interactions. The workers came from the same industry, which limits the influence of socioeconomic and lifestyles factors. There is also information on relevant confounders such as blood pressure, BMI, and smoking habits. The outcomes for this study were retrieved from register data excluding reporting bias.

There are also some limitations to this study. The noise exposure level and the region defined for each worker were collected from their first health examination. The workers could have later on changed their occupation and thereby their noise exposure level or region where they work. The job exposure matrix is constructed from field measurements but for each job title, there were only information on the mean value for the noise exposure. Some individuals will have had lower or higher noise levels than the mean noise level and this could underestimate the risks for myocardial infarction and stroke. The study lacks information on the use of hearing protectors. Hearing protectors were lacking, or, if they were available, were seldom used by the workers in the first half of the twentieth century. There is no information on noise exposure during leisure time, e.g., from traffic noise. There is no information on how much time the workers may have spent outdoors, during work and leisure time, and there is no information on outdoor activities, such as cross-country skiing, snow racing, or shovelling snow, or the use of protective clothing that effect their cold exposure. Most of the misclassifications are probably non-differential which may decrease the associations between occupational noise and/or cold conditions on mortality in cardiovascular diseases. There was no adjustment for alcohol consumption nor leisure time physical activity in the analysis although they are established risk factors for myocardial infarction and stroke. However, it is unlikely that alcohol consumption or leisure time physical activity should vary in relation to noise level or region. A potential bias on effect estimates due to lack of information on these two lifestyle factors is therefore limited.

We only studied men as we had too low power for studying the risk in women, so the risks cannot be automatically transferred to women.

The results were done on a cohort from 1970s until 1993. Today the use of hearing protectors, and the quality of these protectors, has increased over the decades so that the noise exposure into the workers ears has decreased. This may decrease the risk of myocardial infarction and stroke mortality from occupational noise among present day workers. However, the exposure to cold has not changed although there is advancement with clothing; construction workers are still spending much of their work hours outdoors.

The study indicates an interaction between working at hazardous noise levels and living and working in cold conditions for increased mortality in myocardial infarction.

This study was funded by AFA Insurance (Grant number 150070).

The Regional Ethical Review Board at Umeå University approved this study (Dnr 2016-43-31M).