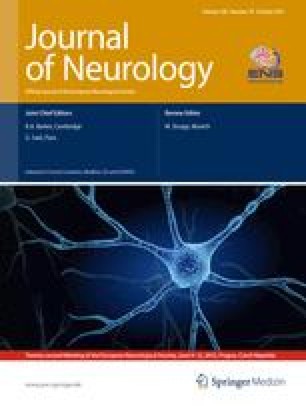 Pendular nystagmus (PN) is an involuntary ocular oscillation that can be found in congenital or acquired visual or central nervous system diseases [1, 2]. We describe the case of a patient with PN associated with progressive cerebellar ataxia and palatal tremor (PAPT). The PN has been registered and analyzed with video-oculography.

A 55-year-old man complained of a 2-year history of progressive difficulty with running and walking accompanied by unsteadiness. Over this time, he described transient oscillopsia. In retrospect, he reported a long history of difficulty in biking and subtle visual disturbances and tinnitus (but no ear click). There was no relevant family and past medical history. Examination revealed wide-based and unsteady gait, impossible tandem walk and marked dystasia at the single leg stance test (Video 1). The other cerebellar tests were normal (Video 2). Tendon reflexes were brisk at four limbs. The nystagmus was almost invisible at eye (Video 3, part 1),...

Spinocerebellar Ataxia Inferior Olive Superior Cerebellar Peduncle Friedreich Ataxia Progressive Ataxia
These keywords were added by machine and not by the authors. This process is experimental and the keywords may be updated as the learning algorithm improves.

The authors thank Dr. Erik Ulmer for his technical advice and the patient for his willing collaboration and sympathy.

Video 1 The video demonstrates the presence of marked disequilibrium both in the static tests as the Single Leg Stance and in the dynamic tests as in Tandem Walking. (MPG 13090 kb)

Video 3 The ocular oscillations are barely recognizable at clinical examination (part 1), while the nystagmus is clearly demonstrated through the infrared video-oculography. The nystagmus develops preferentially in the vertical plane. A secondary rotational counter-clockwise component can be identified (part 2). The palatal tremor is symmetrical, although it is occasionally lateralized to the left side (part 3). (MPG 3510 kb)