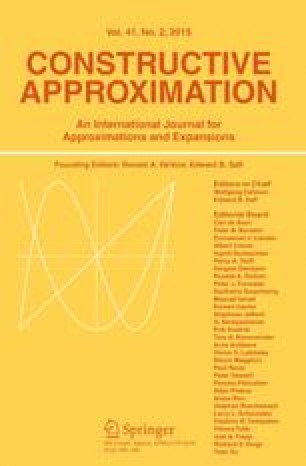 Analysis Related to All Admissible Type Parameters in the Jacobi Setting

We derive an integral representation for the Jacobi–Poisson kernel valid for all admissible type parameters \(\alpha ,\beta \) in the context of Jacobi expansions. This enables us to develop a technique for proving standard estimates in the Jacobi setting that works for all possible \(\alpha \) and \(\beta \). As a consequence, we can prove that several fundamental operators in the harmonic analysis of Jacobi expansions are (vector-valued) Calderón–Zygmund operators in the sense of the associated space of homogeneous type, and hence their mapping properties follow from the general theory. The new Jacobi–Poisson kernel representation also leads to sharp estimates of this kernel. The paper generalizes methods and results existing in the literature but valid or justified only for a restricted range of \(\alpha \) and \(\beta \).

Communicated by Edward B. Saff.

The main result of [28] is restricted to \(\alpha ,\beta \ge -1/2\). It states that several fundamental operators in the harmonic analysis of Jacobi expansions, including Riesz transforms, imaginary powers of the Jacobi operator, the Jacobi–Poisson semigroup maximal operator, and Littlewood–Paley–Stein type square functions, are (vector-valued) Calderón–Zygmund operators. Consequently, their \(L^p\) mapping properties follow from the general theory. The proofs in [28] rely on an integral formula for the Jacobi–Poisson kernel derived in [28] from a product formula for Jacobi polynomials due to Dijksma and Koornwinder [17]. Unfortunately, the latter result is not valid if either \(\alpha < -1/2\) or \(\beta < -1/2\), and this limitation is inherited by the above-mentioned Jacobi–Poisson kernel representation. Thus the technique of proving estimates for kernels defined via the Jacobi–Poisson kernel developed in [28] is designed for the case \(\alpha ,\beta \ge -1/2\). The object of the present paper is to eliminate this restriction in the parameter values, which will require some new techniques.

Our method starts with the deduction of an integral representation of the Jacobi–Poisson kernel, valid for all \(\alpha ,\beta > -1\), see Proposition 2.3. This formula contains as a special case the one obtained in [28, Proposition 4.1] for \(\alpha ,\beta \ge -1/2\) and is more involved if either \(\alpha \) or \(\beta \) is less than \(-1/2\). Then we establish a suitable generalization to all \(\alpha ,\beta >-1\) of the strategy employed in [28] to prove standard estimates [see (15)–(17) below] for kernels expressible via the Jacobi–Poisson kernel. To achieve this, some essentially new arguments are required, and the method allows a unified treatment of all parameter values \(\alpha ,\beta > -1\).

As an application of these techniques, we prove that the maximal operator of the Jacobi–Poisson semigroup, the Riesz–Jacobi transforms, Littlewood–Paley–Stein type square functions and multipliers of Laplace and Laplace–Stieltjes transform type are scalar-valued or vector-valued Calderón–Zygmund operators, in the sense of the space of homogeneous type \(([0,\pi ],\mathrm{d}\mu _{\alpha ,\beta },|\cdot |)\); see Theorem 5.1. This extends to all \(\alpha ,\beta > -1\) several results for \(\alpha ,\beta \ge -1/2\) obtained in [28] and earlier papers, as well as results on the two kinds of Laplace transform type multipliers that follow from the recent work of Langowski [22]. Our technique is well suited to a wider variety of operators, including more general forms of \(g\)-functions and Lusin area type integrals. In a similar spirit, analogous problems concerning analysis for “low” values of type parameters were recently investigated in the Laguerre [30], Bessel [8], and certain Dunkl [9] settings.

The Jacobi–Poisson kernel representation derived in Proposition 2.3 makes it possible to describe the exact behavior of the kernel; see Theorem 6.1. The sharp estimates we prove extend to all \(\alpha ,\beta >-1\) the bounds found not long ago by Nowak and Sjögren [29, Theorem A.1 in the Appendix] under the restriction \(\alpha ,\beta \ge -1/2\). An important application of Theorem 6.1 are the sharp estimates for potential kernels in the Jacobi and Fourier–Bessel settings proved recently by Nowak and Roncal [27]. Moreover, Theorem 6.1 readily implies explicit sharp bounds for the nonspectral variant of the Jacobi–Poisson kernel sometimes called the Watson kernel and given by (see [2, Lecture 2] or [1, p. 385])
$$\begin{aligned} \sum _{n=0}^{\infty } r^n \frac{P_n^{\alpha ,\beta }(x)P_n^{\alpha ,\beta }(y)}{h_n^{\alpha ,\beta }}. \end{aligned}$$
Here \(0<r<1, x,y \in [-1,1], P_n^{\alpha ,\beta }\) are the classical Jacobi polynomials, and \(h_n^{\alpha ,\beta }\) are suitable normalizing constants. Recently an upper bound for the Watson kernel was obtained by Calderón and Urbina [5], and some earlier results in this spirit can be found in [4, 6, 14, 23] (see also [15]). We remark that our results concerning mapping properties of the Jacobi–Poisson semigroup maximal operator, see Corollary 5.2, lead in a straightforward manner to analogous results for the maximal operator related to the Watson kernel and investigated in [3, 4, 5, 6, 16].

The paper is organized as follows. In Sect. 2, we derive an integral representation of the Jacobi–Poisson kernel valid for all \(\alpha ,\beta > -1\). Section 3 contains various facts and preparatory results needed for kernel estimates. In Sect. 4, we prove standard estimates for kernels associated with the operators mentioned above. This leads to our main results in Sect. 5, saying that the operators in question can be interpreted as Calderón–Zygmund operators and giving, as a consequence, their \(L^p\) mapping properties. Finally, Sect. 6 is devoted to sharp estimates of the Jacobi–Poisson kernel.

Throughout the paper, we use a fairly standard notation with essentially all symbols referring to the space of homogeneous type \(([0,\pi ],\mathrm{d}\mu _{\alpha ,\beta },|\cdot |)\). Since the distance in this space is the Euclidean one, the ball denoted \(B(\theta ,r)\) is simply the interval \((\theta -r,\theta +r)\cap [0,\pi ]\). When writing estimates, we will frequently use the notation \(X \lesssim Y\) to indicate that \(X \le CY\) with a positive constant \(C\) independent of significant quantities. We shall write \(X \simeq Y\) when simultaneously \(X \lesssim Y\) and \(Y \lesssim X\).

In this section, we gather various technical results, altogether forming a transparent and convenient method of proving standard estimates for kernels defined via the Jacobi–Poisson kernel. The essence of this technique is a uniform way of handling double integrals against products of measures of type \(\mathrm{d}\Pi _{\gamma }\) and \(\Pi _{\gamma }(u)\, \mathrm{d}u\). The resulting expressions contain only elementary functions and are relatively simple.

The next lemma will be frequently used in Sect. 4 to prove the relevant kernel estimates. Only the cases \(p\in \{ 1,2,\infty \}\) will be needed for our purposes. Other values of \(p\) are also of interest, but in connection with operators not considered in this paper.

The next lemma and corollaries are long-time counterparts of Corollary 3.5 and Lemma 3.7.

To prove this, it is more convenient to employ the series representation of \(H_t^{\alpha ,\beta }(\theta ,\varphi )\) rather than the formulas from Proposition 2.3.

Since the other term in (13) is trivial to handle, the conclusion follows. \(\square \)

A strengthened special case of Corollary 3.9 will be needed when we estimate kernels associated with multipliers of Laplace–Stieltjes type.

In the proof, we tacitly assume that passing with the differentiation in \(\theta \) or \(\varphi \) under integrals against \(\mathrm{d}t\) or \(\mathrm{d}\nu (t)\) is legitimate. In fact, such manipulations can easily be verified by means of the dominated convergence theorem and the estimates obtained in Corollary 3.5 and Lemma 3.8.

We treat each of the kernels separately.

It is well known that a large part of the classical theory of Calderón–Zygmund operators remains valid, with appropriate adjustments, when the underlying space is of homogeneous type and the associated kernels are vector-valued, see for instance [31, 32]. In particular, if \(T\) is a Calderón–Zygmund operator in the sense of \(([0,\pi ],\mathrm{d}\mu _{\alpha ,\beta },|\cdot |)\) associated with a Banach space \(\mathbb {B}\), then its mapping properties in weighted \(L^p\) spaces follow from the general theory.

As a consequence of Theorem 4.1, we get the following result.

The standard estimates are provided in all the cases by Theorem 4.1. Thus it suffices to verify \(L^2\) boundedness and kernel associations [conditions (A) and (B) above]. This, however, was essentially done in [28, Section 3], since the arguments given there are actually valid for all \(\alpha ,\beta > -1\) if combined with the estimates proved (in some cases implicitly) in Sect. 4. An exception here are the Laplace and Laplace–Stieltjes type multipliers. But in these cases, the boundedness in \(L^2\) is straightforward, and the kernel associations are justified according to the outline opening the proof of [28, Proposition 2.3], see [28, Section 3, pp. 732–733]. Since all the necessary ingredients are contained in [28] and in the present paper, we leave further details to interested readers. \(\square \)

6 Exact Behavior of the Jacobi–Poisson Kernel

To prove this, we will need some technical results, one of which is Lemma 3.2 (a). Note that this lemma remains true if the integration is restricted to the subinterval \((1/2,1]\). This follows from the structure of \(\mathrm{d}\Pi _{\nu }\) and the fact that the integrand is positive and increasing.