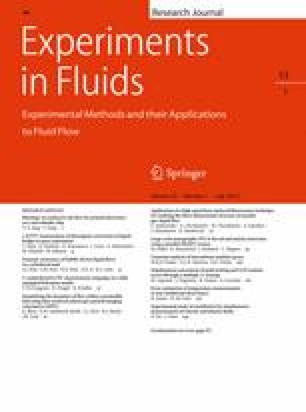 This paper presents results of an experimental study investigating the mean and temporal evolution of flow within the pore space of a packed bed overlain by a free-surface flow. Data were collected by an endoscopic PIV (EPIV) technique. EPIV allows the instantaneous velocity field within the pore space to be quantified at a high spatio-temporal resolution, thus permitting investigation of the structure of turbulent subsurface flow produced by a high Reynolds number freestream flow (Re s in the range 9.8 × 103–9.7 × 104). Evolution of coherent flow structures within the pore space is shown to be driven by jet flow, with the interaction of this jet with the pore flow generating distinct coherent flow structures. The effects of freestream water depth, Reynolds and Froude numbers are investigated.

Pore Space Light Sheet Flow Depth Pore Flow Laser Endoscope
These keywords were added by machine and not by the authors. This process is experimental and the keywords may be updated as the learning algorithm improves.

We thank the UK Natural Environment Research Council for funding this work (NE/E006884/1). All experiments were undertaken in the Ven Te Chow Hydrosystems Laboratory, University of Illinois, and we thank Professor Marcelo Garcia for allowing access to this facility, and Professor Kenneth Christensen for providing part of the PIV equipment. Stephan Kallweit of Intelligent Laser Applications (ILA GmbH) supplied the endoscopes and much useful advice on their application, for which we are very grateful.

Online Resource 1 Sequence of images of instantaneous flow fields showing the evolution of flow driven by a downstream jet leading to formation of a vortical pathway. Supplementary material 1 (AVI 22777 kb)

Online Resource 2 Sequence of images of instantaneous flow fields showing the evolution of flow triggered by a spanwise jet leading to formation of a large vortical structure, whose evolution is driven by fluid motion that is first downstream and then upstream. Supplementary material 2 (AVI 6537 kb)

On the basis of the analysis described above, the uncertainty \( \sigma_{\text{U}} \), which for this application was non-uniform over the field of view due to the different levels of optical distortion, was estimated to be in the range of 1–3%.

Uncertainty of the mean values

This analysis is based upon the assumption that no systematic error is present in the velocity data and the representativeness of the mean value can be evaluated statistically. If the sources of error are assumed to be independent, each value of a sample U x(i, j) (or U y(i, j)) can be considered as a random variable, R. Under these assumptions, the uncertainty \( \sigma_{{\overline{\text{U}} }} \), which measures the statistical stability of the estimated mean values, can be estimated by computing the standard deviation, S, of the velocity magnitude (derived through computing the components by Eqs. 2 and 3) and introducing a statistical analysis approach where \( \sigma_{{\overline{\text{U}} }} \) is proportional to the ratio \( S/\sqrt n \). Using the probability function concept and introducing a confidence interval of 95%, the mean flow estimated with a sample of 500 realizations allows an estimate of both the vertical and horizontal components of the velocity field with an uncertainty no larger than 2.5% of the sample mean.