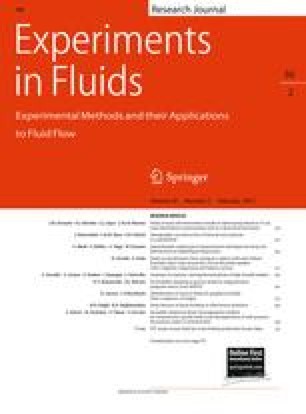 We present an experimental study of the dynamics of a plume generated from a small heat source in a high Prandtl number fluid with a strongly temperature-dependent viscosity. The velocity field was determined with particle image velocimetry, while the temperature field was measured using differential interferometry and thermochromic liquid crystals. The combination of these different techniques run simultaneously allows us to identify the different stages of plume development, and to compare the positions of key-features of the velocity field (centers of rotation, maximum vorticity locations, stagnation points) respective to the plume thermal anomaly, for Prandtl numbers greater than 103. We further show that the thermal structure of the plume stem is well predicted by the constant viscosity model of Batchelor (Q J R Met Soc 80: 339–358, 1954) for viscosity ratios up to 50.

Particle Image Velocimetry Viscosity Ratio Thermal Plume High Prandtl Number Plume Dynamic
These keywords were added by machine and not by the authors. This process is experimental and the keywords may be updated as the learning algorithm improves.

This work has benefited from discussions with Neil Ribe, Eric Mittelsteadt, Peter van Keken, and Béatrice Guerrier. It was funded by program DyETI of INSU/CNRS, the French ANR “BEGDY” and the collaboration between IPGP in Paris and ERI in Tokyo. The manuscript has been improved, thanks to the constructive comments of two anonymous reviewers.

Movie 1: RUN1. On the left side of the screen is the left half of the plume seen by differential interferometry, and on the right side is the other half of the plume followed by the thermochromic liquid crystals isotherms. The total duration of the movie is 600 s (1782 KB)

348_2010_924_MOESM2_ESM.mp4 (1.7 mb)
Movie 2: RUN2. On the left side of the screen, the whole plume is imaged by its thermochromic liquid crystals isotherms, while on the right side, the plume head is followed by differential interferometry. The duration of the movie is 940 s. (1693 KB)

The TLCs were calibrated by imposing a stable linear temperature gradient to a 10 cm layer of the experimental fluid: the light intensity across a vertical cross-section of the tank is then plotted as a function of the vertical profile of temperature (Fig. 17). Each type of TLC results in an intensity peak for a given temperature. Each bright stripe has a finite thickness because the polymeric capsules enclosing the TLCs introduce some scatter around the temperature at which they respond. The peak maximum gives us the isotherm value; and the width of the peak at half maximum intensity (or bandwidth) gives the local temperature gradient (Table 3). Peaks are well defined for aqueous slurries in sugar syrups, where the precision of the isotherms values reaches ±0.1°C, and the bandwidth is about 0.2°C. The use of the same TLC technique in silicone oils of similar viscosity show much poorer results with bandwidth reaching 1.5°C (Limare et al. 2008; Vatteville et al. 2009). This may be due to the response of the TLCs coating, which is chemically different in the two cases.
Table 3

Characteristics of the liquid crystals (KMN** are from Japan Capsular Products, Inc.; and BM/** are from Hallcrest, Inc.) used in the experiments with their calibration values

Appendix 3: Estimate of the optical distortion

Since a thermal anomaly acts as a divergent lens, we estimated its effect on the TLC isotherms positions. For this purpose we have used the formula given by Laudenbach and Christensen (2001) for the deflection angle of a laser beam through an axisymmetric thermal plume for a given distribution of the refractive index:
$$ \alpha(p)=2p \int\limits_{p_0}^{\infty} \frac{1}{n(p^2-p_0^2)} \frac{{\rm d}n}{{\rm d}p} {\rm d}p $$
(17)
where p is defined as p = r n(r) and p 0 = r n 0; and n(r) is the refractive index distribution and n 0 the refractive index of the medium at ambient temperature.
The distribution of the refractive index of the plume is known from the DI results. Since the isotherms are visualized in a plane passing through the center of the plume, we therefore considered that the deflection angle of the scattered light from the isotherms was equal to half of the total deflection angle of a virtual beam passing through the entire plume. In our case, this angle remains smaller than 10−3 radian. This implies that the associated shift in location of a given isotherm would remain smaller than 5 × 10−2 mm (Fig. 18).