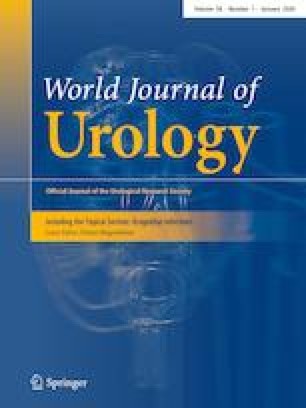 We performed a retrospective analysis of patients treated with radical cystectomy and lymphadenectomy (LAD) for bladder cancer to assess the differential association of the extent of LAD with perioperative complications and re-hospitalization.

LAD templates were defined as limited (lLAD = external, internal iliac and obturator), extended (eLAD = up to crossing of ureter and presacral lymph nodes), and super-extended (sLAD = up to the inferior mesenteric artery). Logistic regression models investigated the association of LAD templates with intraoperative, 30- and 30–90-day postoperative complications, as well as re-hospitalizations within 30 and 30–90 days.

sLAD leads to higher lymph-node yield and N2/N3 rate but not to higher complication rate compared to lLAD and eLAD. With the advent of novel adjuvant systemic therapies, precise nodal staging will have a crucial role in patients counseling and clinical decision making.

Radical cystectomy (RC) with lymphadenectomy (LAD), preceded by neoadjuvant chemotherapy (NAC) when possible, is the standard of care for muscle-invasive and recurrent high-risk bladder cancer (BCa) [1]. A properly done LAD allows accurate staging and may improve oncologic outcomes, since lymph-node metastases are present in up to 25% of patients treated with RC for muscle-invasive BCa [2, 3, 4]. However, the extent of LND is still under debate and the association of the extent of the LND templates with survival remains controversial [5]. In particular, the benefits of a super-extended LAD (sLAD) are questioned, as lymph-node metastasis above the aortic bifurcation is uncommon and the dissection of these nodes could result in longer operative times. Indeed, adverse events and increased complications can occur more frequently in more extensive LAD templates, potentially compromising quality of life in this population that is elderly in general [6, 7, 8, 9, 10]. The association of a more extensive LAD template with perioperative complications has not been sufficiently assessed, to our knowledge. Results from a recent randomized trial failed to show any significant differences in 30- and 90-day complications rates between extended LAD (eLAD) and sLAD [10]. However, this study did not report intraoperative complications and re-hospitalization rates. We hypothesized that a more extended LND would be associated with a higher rate of intra- and postoperative complications, length of stay, and re-admissions. To address this, we performed a detailed analysis of perioperative complications and investigated their association with different LAD templates.

Following institutional review board approval (ID 2168/2017), we reviewed our institutional database to identify patients treated with RC and LAD for clinically non-metastatic BCa. Patients were considered non-metastatic if preoperative imaging did not show spread from the primary site to other places in the body. Patients with missing information regarding postoperative complications within 90 days and those who did not receive all oncologic care at our institution were excluded from the analysis.

Patients were treated with RC and LAD according to guideline recommendations at the time [1]. RC was performed by different surgeons. All procedures were performed by an open technique. The decision for the type of urinary diversions was based on disease characteristics, patient’s wishes, and performance status. The extent of LAD was at the surgeon’s discretion. We defined 12 LAD regions. The limited template (lLAD) included bilateral internal iliacs, external iliacs, and obturator regions; the extended template (eLAD) included lLAD plus up to the crossing of the ureter on the common iliac vessels and presacral region; and the super-extended template (sLAD) included the eLAD plus up to the inferior mesenteric artery in addition to, paracaval and para-aortal regions (Fig. 1). Specimens were analyzed by two dedicated genitourinary pathologists.

Due to the retrospective nature of the study, the follow-up was not standardized, but was in accordance with the guidelines at the time. In general, patients underwent physical examination, ultrasonography, whole body imaging including CT with contrast or MRI as well as bone scan when indicated, and laboratory testing and at physician discretion based on patient and disease risk. Postoperative complications were assessed using the Clavien–Dindo classification [11]. Complications were recorded within 30 days after surgery and between 31 and 90 days after surgery. Major complications were defined as Clavien–Dindo ≥ 3. Cause of death was recorded based on chart and/or death certificate review [12].

Means and standard deviations or median and interquartile range values are reported for normally or non-normally distributed continuous variables, respectively. Differences between proportions were reported using the Chi-square and the Mann–Whitney U test. We built logistic regression models to investigate the association of major postoperative complications as well as intraoperative complications with the LAD template used. Statistical significance was considered at a p < 0.05. All tests were two-sided. Statistical analyses were performed using R (R project, Vienna, Austria).

We identified 434 patients treated with RC within our institutional database. A total of 284 patients had sufficient data available for analysis. Clinicopathologic features are depicted in Table 1. Overall, 200 (70.4%) were treated with lLAD, 34 (12%) with eLAD, and 50 with sLAD (17.6%). The use of sLAD increased with time (Fig. 2). This was associated with an increase in lymph nodes harvested (median nodes harvested 13 vs 31 vs 39 for lLAD, eLAD, and sLAD, respectively). sLAD was significantly associated with a higher incidence of N2 and N3 status at RC compared to lLAD and eLAD (p = 0.04). In subgroup analysis, the receipt of NAC in patients treated with sLAD was not associated with pN + status (OR 1.16, 95% CI 0.89–1.52).
Table 1

aOdds ratio reported for the occurrence of major complications

We investigated perioperative complications and hospitalization rates associated with lLAD, eLAD, and sLAD using data originating from a tertiary referral center. We found that two-thirds of patients experienced any type of complication and one-third had at least one major complication within 30 days after RC. Our results corroborate those reported in retrospective studies and prospective trials [3, 5, 9, 10, 13, 14, 15]. To our knowledge, this is the first study investigating the association of lLAD, eLAD, and sLAD with perioperative outcomes. We reject our null hypothesis, as we failed to observe an association between the extent of LAD template and perioperative complications. Importantly, the previous reports did not investigate the impact of LAD template on surgical morbidity. A retrospective multicenter series investigated the association of LAD with survival outcomes. Authors could not show a significant difference between eLAD and sLAD. However, no postoperative outcomes were reported [9]. Results from the first RCT comparing lLAD vs sLAD did not show significant difference in terms of recurrence-free survival between groups. On exploratory analyses, mortality and major complications (Clavien–Dindo ≥ 3) occurring within 30 and 90 days did not differ between groups [10].

While clinicopathologic features and comorbidity indices have been associated with hospitalization [3, 18], studies investigating this association with LAD templates are missing. We filled this gap using logistic regression models.

We did not find any difference in operative times between different LAD templates. Retrospective series reported controversial results [13, 19]. The operative time depends on the surgeon, different LAD templates, previous surgeries, and other factors affecting the surgical site; all of these may have influenced these results. We have adopted sLAD in more recent years, reflecting the improvement of the surgical technique and a change in surgical paradigm over the years. Although the sLAD cohort had higher blood loss, this was not associated with higher transfusion rates [13]. Various factors can affect blood loss such as comorbidities, surgical approach and technique, disease severity as well as measurement of blood loss. To our knowledge, no previous studies have reported on blood loss in patients who underwent sLND.

LAD is an essential compound of RC necessary for accurate staging and, potentially, for disease control [5]. A recent RCT form Germany highlighted this issue reporting a 2% rate of lymph-node metastases outside the lLAD [10]. In our series, four patients (8%) treated with sLAD had lymph-node metastases outside the lLAD and eLAD template. These patients would have been, therefore, understaged if no sLAD would have been performed. Moreover, we found higher rates of pN3 compared to this trial (2.1% vs 0.5%). However, these results must be interpreted in the context of the retrospective design and the lack of pathologic re-review. It is, however, true that our series includes patients with clinically more evolved disease than the German RCT.

Identification of preoperative risk factors for hospitalization is of paramount importance for patients’ management and counseling. In line with the previous reports, we identified advanced age and high CCI to be associated with the risk of major postoperative complications [13, 14, 19]. However, these studies did not investigate the association of LAD extent with outcomes. This is a relevant shortcoming, as omitting surgical steps can obviously influence perioperative outcomes. To overcome these limitations, we performed a detailed analysis of complications associated with different LADs and showed that a more extensive LAD is not associated with higher perioperative morbidity, while this is associated with a better disease staging. Whether the extent of LAD is associated with cure rates and survival remains to be assessed in ongoing prospective RCTs (i.e., SWOG 1011).

Nevertheless, RC remains a procedure associated with high perioperative complication rates due to the procedure itself, patients’ comorbidities and tumor characteristics. It is, therefore, of paramount importance to balance potential benefits of a more extended LAD and counsel patients for a risk-adapted approach. In this context, one-fits-all approach using a unified template for all patients is not optimal and can be considered an overtreatment in a significant number of patients [6, 7]. There is an unmet need for better patient selection and development of clinical tool which may aid in the identification of patients who are more likely to benefit from a sLAD.

Despite its strengths, our study is not devoid of limitations, which are mainly inherent to its retrospective design. The long time span of the study and missing sLAD in early years may have influenced results. Moreover, different surgeons over time may have also introduced additional bias. sLAD patients had higher rate of NAC which has been suggestive to lead to more difficult dissection and a minimally higher complication rate [20]. Finally, other perioperative pathways that have shown to improve surgical outcomes, i.e., the ERAS protocol [21], were implemented in more recent patients treated mainly with sLAD, influencing, therefore, results.

Our data confirm that while sLAD leads to higher number of nodes removed and resulting higher nodal stage, it does not increase perioperative morbidity. Further studies should focus on the development of risk-adapted models to guide the choice of an individualized LAD template based on clinicopathologic characteristics and patient health status in a shared decision-making process with the patient.