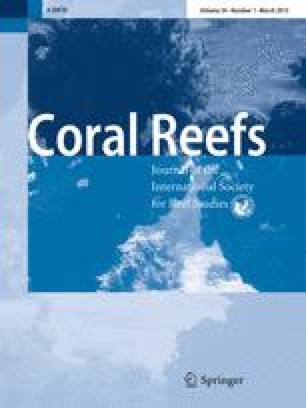 Electronic Supplementary Material Protect Area Benthic Community Ecosystem Function Soft Coral
These keywords were added by machine and not by the authors. This process is experimental and the keywords may be updated as the learning algorithm improves.

The rabbitfishes, Siganus spp., are generally classified as herbivores. A recent study shows that closely related Siganus species can express distinct ecosystem functions with one as a grazer of reef turf algae and the other primarily a grazer of off-reef detrital aggregates (Fox et al. 2009), suggesting that the herbivorous role of rabbitfishes on reefs might not be as uniform as previously thought. In August 2014, at the Hobihu Marine Protected Area (MPA), Kenting National Park (21°56.30′N; 120°44.75′E), southern Taiwan, where herbivorous fishes are dominated by Siganus fuscescens and the benthic community is composed of soft corals including Sinularia, Lobophytum, and Sarcophyton, we observed schools of S. fuscescens foraging at the tops of soft corals and grazing on turf algae growing on the coral surfaces (Fig. 1; Electronic Supplementary Materials, ESM 1). One of the S. fuscescens schools (ca. 35 individuals) continued to bite Sarcophyton colonies after the surface turf algae were cropped (Fig. 2; ESM 2), leaving distinct scars on coral surfaces (Fig. 3; ESM 2). Our observations indicate that chemical toxins and sclerites (van Alstyne et al. 1994) did not deter S. fuscescens from feeding on Sarcophyton and provide evidence that the feeding habits of some coral reef-associated fishes might be oversimplified and should be validated on a species-by-species basis (Bellwood et al. 2006; Fox et al. 2009).