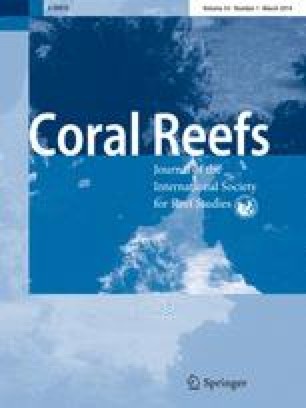 Coral Reef Alternative Model Model Organism Predation Risk Marine Fish
These keywords were added by machine and not by the authors. This process is experimental and the keywords may be updated as the learning algorithm improves.

Sentinel behaviour is defined as a strategy of coordinated vigilance in which predation risk is reduced by one member of a pair or group adopting a posture of vigilance, thereby allowing the other member(s) to reduce their vigilance, typically whilst foraging (McGowan and Woolfenden 1989). Such behaviour has previously only been documented in mammals and birds (Wright et al. 2001; Ridley et al. 2013). During observations of rabbitfishes (Siganidae) belonging to the species Siganus vulpinus, S. corallinus and S. puellus at sites around Lizard Island, northern Great Barrier Reef, Australia (14°40′S, 145°28′E), we saw pairs of all three species engage in what appears to be coordinated vigilance whilst foraging (Figs. 1, 2). Typically, we observed one member of the pair terminating vigilance at the same time as the other member of the pair commenced its vigilance, implying the presence of a deliberate behavioural strategy, rather than chance occurrence (Fig. 2; ESM S1).

To our knowledge this is the first report of behavioural observations that are consistent with a sentinel system in conspecific fishes. It is worth noting that the species observed here all forage in cryptic locations in the reef matrix such as under ledges or within crevices, where vision (and therefore vigilance) is particularly compromised. We hypothesise that, in visually occluded habitats such as coral reefs, pairing species may gain a benefit by employing a strategy of coordinated vigilance, and we suggest that rabbitfishes may provide an alternative model organism with which to examine competing hypotheses regarding the evolutionary basis for sentinel behaviour.

We wish to thank Lizard Island Reef Research Foundation for funding (Lizard Island Doctoral Fellowship to R.J.F.) and A. Cockburn for helpful discussions.