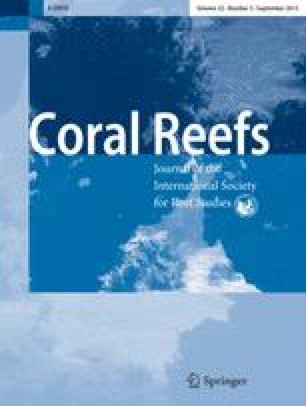 Sponge Monitoring Site Molasses Coral Tissue Partial Removal
These keywords were added by machine and not by the authors. This process is experimental and the keywords may be updated as the learning algorithm improves.

Monitoring of the threatened Caribbean coral, Acropora palmata, in the upper Florida Keys, USA, since 2002, has revealed annular lesions of unknown origin. On September 13, 2012, a honeycomb cowfish (Acanthostracion polygonius) was observed creating annular lesions on A. palmata colonies at Molasses Reef in the Florida Keys (Fig. 1; video in Electronic Supplemental Material). A. polygonius typically preys on tunicates, alcyonarians, sponges, small crustaceans and gastropods (Randall 1967), and is not known to be a corallivore (Cole et al. 2008). To our knowledge, this is the first report of this species creating lesions on A. palmata.
Lesions created by A. polygonius are distinct from other known fish bites (Bruckner 2007). They appear as a white ring with apparently healthy, intact tissue in the center, and are approximately 2 cm in diameter (Fig. 2). The ring appearance results from partial removal of tissue from the sides of the corallites and coenosteum, leaving polyps within the ring intact. There is no apparent mechanical damage to the corallites. As healing progresses, the ring gradually becomes a ring of pale tissue until zooxanthellae are recovered. Lesions heal rapidly (less than 6 weeks) and do not contribute to significant losses of live tissue. It is uncertain whether the fish is actively feeding on the coral tissue or the lesion is a by-product of the fish’s foraging behavior. Although these lesions are rare, affecting 6 ± 4 % (mean ± SD) of colonies in the Florida Keys, their occurrence is typically clustered, affecting nearly 100 % of colonies at some sites. Of our 24 monitoring sites in Florida, colonies are consistently affected at three sites, while rings were rare to absent at the remaining sites. Through A. palmata monitoring in other locations: Curaçao (since 2006), Navassa (since 2006), British Virgin Islands (2006–2007), Puerto Rico (2007–2009), and US Virgin Islands (2007–2009), we have observed these annular lesions to have a similar patchy occurrence but lower average prevalence than in the Florida Keys.