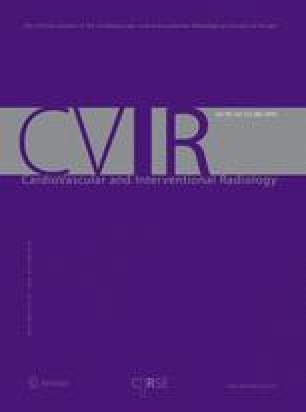 A pseudoaneurysm (PA) is a hematoma occurring from a leaking hole in the arterial wall. Common femoral artery psuedoaneurysms (CFA PAs) are most commonly encountered as a result of a recent angiographic procedure. Less commonly, they occur as a result of penetrating trauma or at the anastomosis of a prior vascular surgical procedure. The incidence of femoral PAs ranges from 0.2 to 0.5 % after diagnostic angiography and from 2 to 8 % after coronary interventions [1]. Frequency of CFA anastomotic PAs is about 5.7 % per anastomosis [2]. Treatment options for CFA PA include conventional open surgery, US-guided percutaneous thrombin injection, and endovascular repair. Endovascular repair is performed percutaneously with stent grafts. The usual access site is via a contralateral “up and over” ante-grade approach through the contralateral CFA. Other potential access sites include the brachial artery or less commonly the axillary artery which are not very popular due to...

Popliteal Artery Superficial Femoral Artery Common Femoral Artery Endovascular Repair Systolic Heart Failure
These keywords were added by machine and not by the authors. This process is experimental and the keywords may be updated as the learning algorithm improves.