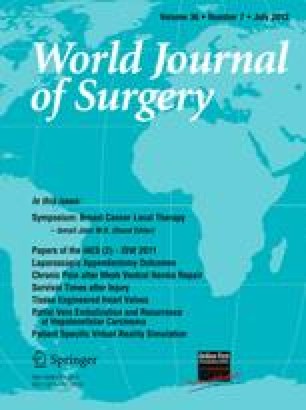 Meticulous mediastinal lymphadenectomy frequently induces recurrent laryngeal nerve palsy (RLNP). Surgical robots with impressive dexterity and precise dissection skills have been developed to help surgeons perform operations. The objective of this study was to determine the impact on short-term outcomes of robot-assisted thoracoscopic radical esophagectomy performed on patients in the prone position for the treatment of esophageal squamous cell carcinoma, including its impact on RLNP.

A single-institution nonrandomized prospective study was performed. The patients (n = 36) with resectable esophageal squamous cell carcinoma were divided into two groups: patients who agreed to robot-assisted thoracoscopic esophagectomy with total mediastinal lymphadenectomy performed in the prone position (n = 16, robot-assisted group) without insurance reimbursement, and those who agreed to undergo the same operation without robot assistance but with health insurance coverage (n = 20, control group). These patients were observed for 30 days following surgery to assess short-term surgical outcomes, including the incidence of vocal cord palsy, hoarseness, and aspiration.

Robot assistance significantly reduced the incidence of vocal cord palsy (p = 0.018) and hoarseness (p = 0.015) and the time on the ventilator (p = 0.025). There was no in-hospital mortality in either group. There were no significant differences between the two groups with respect to patient background, except for the use of preoperative therapy (robot-assisted group <control, p = 0.003). There were no significant differences in estimated blood loss, operating time, number of dissected lymph nodes, completeness of resection, or the incidence of the other complications, except for anastomotic leakage (p = 0.038).

The authors express special thanks to Professor Masaki Kitajima for his wonderful supervision of this project. The authors are indebted to Ms. Sheena Tam and Dr. Yuexin Li of the University of British Columbia, and Ms. Susan Holland and Mr. Victor Chen for their review of this manuscript.

This work was not supported by any grants or funding. No author has commercial association or financial involvement that might pose a conflict of interest.

Video clip 2 Robot-assisted thoracoscopic lymphadenectomy along the left RLN with the patient in the prone position. First, the trachea was rolled back carefully and firmly to the right and ventrally. Then, the tissue, including the left RLN and lymph nodes, was dissected sharply just along the trachea and the left bronchus. The posterior aspect was dissected on a vascular sheath covering the aortic arch and the left subclavicular artery. Finally, the left RLN was sharply isolated from the explored tissue and the infra-aortic arch nodes on the face of the pulmonary artery trunk, and the left paratracheal nodes were completely dissected. RLN, recurrent laryngeal nerve (MPG 8470 kb)

Video clip 3 Thoracoscopic lymphadenectomy, without robot assistance, along the left RLN with the patient in the prone position. All the procedures were essentially the same as those performed in the robot-assisted group, but the tremor of the operating surgeon and the camera could be seen. The trachea was rolled back and to the right only with the assistant surgeon’s grasper, which had no articulation (MPG 8292 kb)