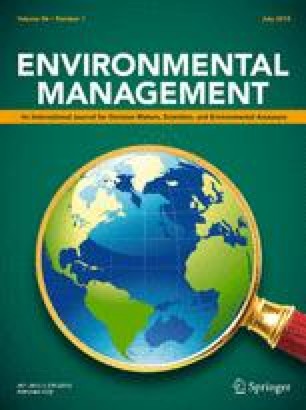 Traditional Land-Use Systems and Patterns of Forest Fragmentation in the Highlands of Chiapas, Mexico

The influence of slash-and-burn agriculture and tree extraction on the spatial and temporal pattern of forest fragmentation in two municipalities in the highlands of Chiapas, Mexico was analyzed. The data series were derived from two subsets of satellite images taken in 1974 and 1996. The analysis was based on area, edge, shape, core area, and neighbor indices. During the 22 years, the dense forest decreased by 8.9%/yr in Huistán and by 8.6%/yr in Chanal, while open/disturbed forest, secondary vegetation, and developed area increased in both municipalities. The total number of fragments increased by 1.4%/yr and 2.3%/yr in Huistán and Chanal, respectively. Dense forest showed the highest increase in the number of fragments (6%/yr in Huistán and 12%/yr in Chanal), while edge length, core area, and number of dense forest core areas decreased. The larger fragments of dense forest present in 1974 were divided into smaller fragments in 1996; at the same time, they experienced a process of degradation toward open/disturbed forest and secondary vegetation. Two different fragmentation patterns could be distinguished based on agricultural or forestry activities. Forest fragmentation did not occur as a continuous process; the pattern and degree of fragmentation were functions of land tenure, environmental conditions, and productive activities. The prevalence of rather poor soil conditions, small-holdings, growing human population densities, increasing poverty, and the absence of alternative economic options will maintain a high rate of deforestation and forest fragmentation in the studied region.