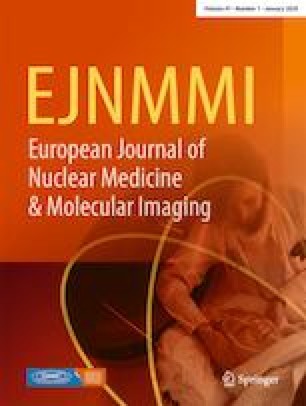 This article is part of the Topical Collection on Oncology – Genitourinary

What is the role of androgen deprivation therapy (ADT) on prostate specific membrane antigen (PSMA) expression? Should patients stop or even start ADT treatment prior to PSMA-ligand Positron Emission Tomography Imaging (PET)?

Prostate cancer (PCa) is the second most common solid tumour in men with more than 1.3 million cases diagnosed and more than 350,000 deaths estimated to have occurred in 2018 [1]. ADT is an integral part of treatment for high-risk, recurrent or metastatic prostate cancer. Therefore, imaging of patients prior to, during or after ADT is common. It is known that results from molecular imaging can be influenced by various treatments (e.g. chemotherapy in FDG PET, somatostatin-analogues in DOTA-peptide PET). This editorial aims to outline the current knowledge of interaction between PSMA-ligand uptake in PET and ADT.

In current clinical routine, up to one-third of the patients referred for PSMA-ligand PET are on some form of ADT, which highlights that the effects of ADT on PSMA expression and subsequently imaging results need careful consideration. Nuclear medicine physicians have to consider possible ADT interferences when reporting PSMA-ligand PET scans. Its relevance lies both in important implications for PSMA-ligand PET interpretation and for defining the best timing and sequencing of PSMA-ligand scans.

On a cellular level, PSMA is a type II membrane glycoprotein encoded in the folate hydrolase 1 (FOLH1) gene. There are two regulatory elements controlling PSMA expression: PSMA promoter and PSMA enhancer (PSME), located within the third intron of FOLH1 [2]. Androgens downregulate FOLH1 gene expression, reduce transcription of PSMA mRNA and, consequently, inhibit PSMA expression. Conversely, ADT upregulates the FOLH1 gene and thereby increases PSMA expression (Fig. 1). Androgen receptor ChIP-Seq demonstrates four peaks of androgen receptor binding among multiple introns of PSMA in PCa. Resistance to ADT develops over time and through various modes of action. There are androgen receptor splice variants, some of which (such as variant 7) need no androgen for activation being constitutively active. Therefore, patients with a mutant and shortened androgen receptors might not show changes in PSMA expression under ADT. In this context, PSMA expression is always taken as the specific binding sites of PSMA.

In vitro studies with patient’s prostate cancer tissue evaluating the effect of ADT on PSMA expression started in 1996 when Wright et al. [3] studied specimens from patients with high-grade and high-stage prostate cancer (20 matched pre- and post-treatment specimens from primary sites and 16 post-treatment specimens only, 5 from primary and 11 from metastatic lesions), who were treated with ADT, and found increased PSMA expression in 55% of the patients after therapy (ranging from 10 to 90% higher expression). This finding was supported by Murga et al. [4] who described that treatment with enzalutamide and abiraterone amplified PSMA expression gradually and the PSMA level returned to its baseline expression after halt. They also verified that in androgen-dependent cells, antiproliferative effects and upregulation of PSMA were observed at similar, clinically relevant concentrations of antiandrogens. However, in androgen-independent cells, the antiandrogens exhibited minimal antiproliferative activity but upregulated PSMA. The authors concluded that inhibition of tumour cell growth was associated with an upregulation of PSMA by antiandrogens, even in cells that were refractory to treatment with antiandrogens alone.

According to in vivo animal studies (human prostate cancer xenograft models), Evans et al. [5] observed that after ADT, the amount of PSMA per cell increased; however, the overall tumour size decreased after castration and enzalutamide. Therefore, PSMA-ligand uptake on imaging does not correspond with tumour size measurements by calliper. Overall, this leads to two parallel developments, which partly influence each other regarding imaging results. On one hand, PSMA expression is increasing due to androgen receptor inhibition; but, on the other hand, successful treatment with androgen receptor inhibitors leads to a decrease of tumour mass by therapeutically induced cell death.

Table 1 demonstrates that the current available literature is highly heterogeneous, namely, in terms of missing data, number of patients included, castration status, ADT type, ADT duration before PSMA imaging and different methods to determine PSMA expression. Until now, there are no published systematic reviews or meta-analysis about this topic. However, based on 13 of the 19 reports, our analysis indicates that ADT increases PSMA expression [3, 4, 5, 6, 7, 8, 11, 12, 16, 17, 18, 21] or may induce flare phenomena [9]. The remaining 6 studies add the following information: 4 described PSMA expression depended on ADT duration (2 groups concluded that PSMA increased with short-term ADT and decreased after long-term ADT [14, 15] and 2 other groups specifically mentioned that continuous long-term ADT decreased PSMA expression [13, 19]). One study reported PSMA expression depended on patient castration status (reduced in mCSPC and increased in mCRPC patients [10]) and 1 report found no change between naïve treatment patients and patients under short-term ADT [20].

Despite some heterogeneity, in the preclinical scenario, the period of time on ADT ranged from 1 to 4 weeks and PSMA expression increased 2 to 4 times compared with baseline. PSMA expression returned to basal levels within days [16] to 1 week [4] following removal of ADT from the culture.

The first human study to evaluate PSMA expression (meaning specific and non-specific binding of PSMA and therefore more accurately called uptake) as seen with PET imaging after ADT was published in 2017 by Hope et al. [11] who showed PSMA-ligand uptake increased 1.5- to 2.0-fold in their prostate cancer xenograft mouse model and 7-fold in one patient imaged after starting ADT. Regarding the ADT duration, clinical reports describe ranges from 1 week to 7 months. Some of these clinical reports state that PSMA uptake initially increased after ADT, but decreased after long-term ADT. The definition of short-term and long-term ADT varied between studies. Short-term was defined as 2 [14] and 6 weeks [15] of ADT, and long-term ranged from 12 [14] to 13 weeks [15] to 7 months [13].

ADT led to different levels of increased PSMA uptake on PET, ranging from faint (17% [8]) to high increases (7-fold [11]) compared with baseline. Many papers stated that PSMA uptake was dependent on patients’ castration status, but no consensus was established. On one hand, Aggarwal et al. [9] reported increased PSMA expression both in mCSPC patients (66%) and mCRPC patients (41%); these results were concordant with the preclinical evaluation from Meller et al. [18]. On the other hand, Emmett et al. [10] reported that PSMA increased in 45% of mCRPC patients, but decreased in 30% of mCSPC. The duration of ADT was significantly different between the clinical report of Aggarwal et al. (ranging from 13 to 40 days) and Emmett et al. (ranging from 9 to 28 days). The latter hypothesised that PSMA decreased in mCSPC patients because of the strong antiproliferative effect ADT on most PCa phenotypes in the early (castration-sensitive) stages of disease, and that the PSMA increased uptake in mCRPC was likely due to the slower treatment response of PCa to second- or third-line treatment.

Considering the 2 studies that found that ADT reduced PSMA uptake, it is important to notice that Afshar-Oromieh et al. [13] published the first clinical study about continuous long-term ADT (mean 7 months, ranging from 5 to 11 months) in castration-sensitive PCa, comparing the tracer uptake intensity and volume of PCa lesions on PSMA PET before and during ongoing ADT. They verified that long-term ADT significantly reduced PSMA uptake in 71% of all lesions; but they found increase of the uptake in other 12.9% PCa metastatic lesions. The PSMA uptake changes were concordant with tumour volume changes. They concluded that the effect of the reduction in tumour volume and PSA-value decrease was accompanied by a negative impact on tumour detection by imaging. Additionally, the authors hypothesised that the 12.9% of lesions showing an increase in tracer uptake during ongoing ADT despite (complete or incomplete) PSA remission might correlate with those cell clones that become castration-resistant first. The assumption that ADT of short duration may increase PSMA expression while long-term ADT has the opposite effect was also observed in a preclinical study by Liu et al. [19] The low PSMA expression after long-term ADT has been associated with progression of androgen-independent prostate cancer during ADT and some possible mechanisms might be due to mutation, amplification, expression of alternative-splice variants of the androgen receptor, neuroendocrine differentiation and stem cell–like properties. Although controversial from a therapeutic point of view, pausing long-term ADT could help to increase the sensitivity of PSMA-ligand PET with the aim of visualizing the maximum possible extent of disease if needed for subsequent therapy planning (additional to systemic therapy). Similarly, PSMA-ligand therapy might be tested in the context of different ADT sequencing strategies. The still unanswered question is how long does ADT needs to be paused to increase the sensitivity of PSMA ligand imaging in clinical practice (in in vitro studies, PSMA expression returned to basal levels within 1 week [4, 16]).

Currently, only the preliminary results from one clinical trial (NCT03313726 [22]) are available, showing that PSMA uptake is affected heterogeneously by ADT and that bone lesions seem to have the most prominent increase in SUVmax values. The authors did not observe substantial decrease in SUVmax, suggesting that PSMA-ligand imaging is feasible even after castration levels are achieved.

In clinical practice, a significant number of patients referred for PSMA-ligand PET are under ADT. Likely, this is going to change in the future when access to imaging and guideline representation is broader. The updated European Association of Urology guidelines for example now suggest PSMA-imaging in men with biochemical recurrence as early as at PSA-levels above 0.2 ng/ml. Therefore, there is no reason to start ADT before imaging. Nonetheless, methods to enhance PSMA surface expression may translate into significant improvements in the diagnostic sensitivity of PSMA-ligand imaging and therapy. If the aim of the examination is to confirm the presence of recurrent disease, especially in patients with low PSA values (< 0.5 ng/mL), short-term ADT may help to increase tumour detection rates. However, this hypothesis needs to be tested in prospective studies. Considerable inter-lesion and inter-patient heterogeneity in the degree and pattern of induction of PSMA tracer uptake by ADT in both the mCSPC and mCRPC settings should be taken into consideration [9].

In the future, imaging might be used more frequently for response assessment, e.g. early detection of castration-resistant lesions. Also, second-generation antiandrogens are emerging as potential endoradio-/chemosensitizers in mCRPC patients and, consequently, the enhancement of the therapeutic efficiency of PSMA-targeted theranostic methods could be listed as a new capability of antiandrogens. However, it should be noted that the level of baseline PSMA expression cannot predict the responsiveness to this emerging therapeutic approach.

Currently, guidelines miss clear-cut orientations regarding suspension of ADT before PSMA-ligand PET imaging. In addition, there are also no orientations on the benefits of potential PSMA site stimulation by ADT. It is possible that ADT will also help to assess its effect on metabolic response to therapy. Despite the lack of consistency in literature, the majority of studies suggest that short-term ADT increases PSMA expression so that imaging is possible under these circumstances. On the other hand, long-term ADT decreases PSMA-ligand uptake, as tumour lesions get smaller and partial volume effects are more relevant. There is a need for more robust data and it is important to evaluate both castration-sensitive and castration-resistant models and patients, short- and long-term ADT with various agents and methods of action, as well as initial and late response. Finally, there is a need to better understand these ADT effects, particularly during the set-up for systemic PSMA-ligand metabolic therapies.

As a final message, we can state that the temporal relationship between PSMA expression and initiation of ADT may explain some of the different detection sensitivities found in PSMA-ligand imaging. However, there is still a significant need to explore medication and other interferences at the PSMA-ligand sites, most probably, via already ongoing longitudinal studies and other clinical research.

SV, MG and DC have no conflict of interest to declare.

ME is a consultant for Blue Earth Diagnostics, patent application for rhPSMA.