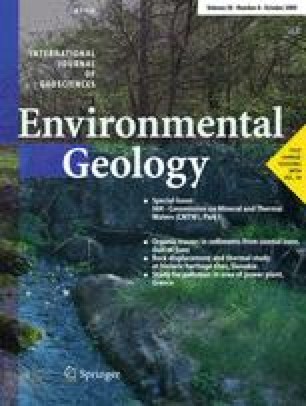 A nitrogen isotope study of soil water and groundwater in southern Indiana, USA, in 1991–1992 demonstrated considerable variations in nitrate degradation processes compared to an earlier investigation in 1986–1987. Although N-fertilizers were applied in May 1991, the δ15N values in soil water decreased in February 1992, indicating its delayed release into the system after substantial rainfall. The δ15N values of groundwater decreased from +12.3‰ in November 1991 to +11.3‰ in February 1992, and to +7.5‰ in March 1992. The increased residence time of nitrate in the soil resulted in increased denitrification, ammonia volatilization and plant uptake, and reduced threat to the groundwater quality. The 1986–1987 study in the area reported that excessive rainfall during the summer rapidly transported the nitrate to deeper horizons and drastically reduced volatilization and microbial reduction of nitrate, thus increasing the immediate threat to the groundwater quality in the area. The present study demonstrated that nitrogen isotopic signatures can be used to determine the effects of local soil type, rainfall, and land-use practices on the fate of nitrate in the subsurface.