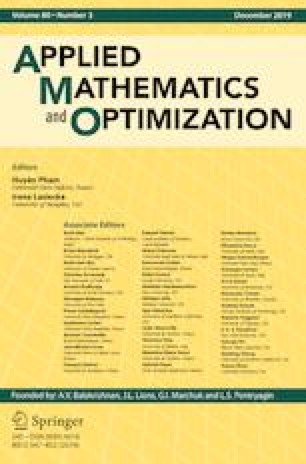 We investigate the long-time behavior of solutions to a stochastically forced one-dimensional Navier–Stokes system, describing the motion of a compressible viscous fluid, in the case of linear pressure law. We prove existence of an invariant measure for the Markov process generated by strong solutions. We overcome the difficulties of working with non-Feller Markov semigroups on non-complete metric spaces by generalizing the classical Krylov–Bogoliubov method, and by providing suitable polynomial and exponential moment bounds on the solution, together with pathwise estimates.

The existence of statistically stationary states to randomly driven systems in fluid dynamics is of basic importance from both mathematical and experimental viewpoints. On the one hand, the existence of an invariant measure provides information on the generic long-time behavior of the system. On the other hand, under ergodicity assumptions, it provides a link between experimental observations (for example, in turbulence theory) and theoretical predictions.

In the context of fluid dynamics, a satisfactory theory of invariant measures has been developed for two-dimensional, incompressible flows [6, 7, 14, 22, 26, 27, 36, 37, 41, 42, 52]. In three dimensions, we mention the works [11, 12, 23], and especially [21], in which solutions which are strictly stationary stochastic processes are constructed, but the concept of invariant measure as a steady state is not well defined due to the absence of the Markov property. In this sense, the situation for multi-dimensional compressible flows is similar. To the best of our knowledge, the only relevant articles are [24], in which an invariant measure is constructed for an approximation of the Lagrangian version of (1.1)–(1.2) and for a different pressure law, and the more recent [4], in which statistically stationary solutions (but no invariant measure) are constructed. There are, however, results for both the dissipative and non-dissipative one-dimensional Burgers equation [10, 13, 25, 44, 51].

In this article, we prove existence of an invariant measure for the compressible Navier–Stokes system. The main advantage in working in one space dimension is that the equations are globally well-posed and can be solved pathwise, leaning on various works in the deterministic setting [28, 29, 31, 32, 33, 34, 43, 46]. For the global solvability in the stochastic case, we mention [48, 49], valid in one space dimension, and [2, 5, 45, 47, 50] for the multi-dimensional case. For the deterministic set-up, we refer to the classical references [16, 38], and to [18, 19] for long-time behavior results.

In turn, (1.1)–(1.5) generates a proper Markov semigroup, and the concept of an invariant measure can be defined in a standard manner. However, there are several obstructions on the path towards the proof of Theorem 1.1. The main ingredients of our approach and contributions to the existing theory on invariant measures can be summarized as follows:

Theorem 1.1 is in fact true for pressure laws of the type
$$\begin{aligned} p(\rho )\sim \rho , \quad \text {as } \rho \rightarrow 0, \end{aligned}$$
and any polynomial growth as \(\rho \rightarrow \infty \). The case of pure power law \(p(\rho )=\rho ^\gamma \), for \(\gamma >1\), remains open. Another important question is the uniqueness (and hence ergodicity) and the attracting properties of the measure \(\mu _A\). It is worth to point out that the problem is highly degenerate, since the noise only acts on one component of the phase space. We conjecture that uniqueness holds, since the unforced system evolves (at a very slow rate) towards the unique steady state \((\rho ,u)=(1,0)\).

1.2 Outline of the Article

Section 2 is dedicated to the properties of solutions to the compressible Navier–Stokes equations. Energy estimates and moment bounds are proven in Sect. 2.1, pathwise estimates in Sect. 2.2, while uniqueness and continuous dependence on data are discussed in Sects. 2.3 and 2.4 , respectively. In Sect. 3 we prove Theorem 1.1, setting up the Markovian framework and discussing existence of invariant measure for non-Feller Markov processes on non-complete metric spaces.

2 Existence and Uniqueness of Solutions

The bounds in the Theorem 2.1 (see also Lemma 2.2) for the density show that neither vacuum states nor concentration states can occur, no matter how large the initial datum is. This is one of several important differences between the Navier–Stokes equations and the inviscid Euler equations, for which vacuum states may in fact occur for large initial data and for certain equations of state (cf. [8, 9]). It is also relevant in this regard that solutions of the Navier–Stokes equations show certain instabilities when vacuum states are allowed (cf. Hoff and Serre [30]).

It is crucial for us to prove various estimates on strong solutions to the compressible Navier–Stokes equations, keeping particular attention to the dependence on the parameter \(A>0\). We collect these estimates in the next two propositions, whose proofs are carried out in the subsequent sections.

The next result is instead a collection of similar, yet pathwise, estimates.

We then have the following uniqueness result.

Regarding the continuous dependence of solutions, the picture is more complicated, and can be proven in the following situation.

3.3 Invariance of the Limit Measure

We aim to prove the following proposition.

We are now in the position to prove invariance of the limiting measure and the bound (3.16).

Appendix A: A General Result on Existence of Invariant Measures

The following is a slight variant of the Krylov–Bogoliubov procedure to prove the existence of an invariant measure for \({\mathcal {P}}_t\).

Assume that for some initial condition \(x\in \mathcal {X}\) the following two properties hold.Then there exists an invariant measure \(\mu \) for \({\mathcal {P}}_t\).