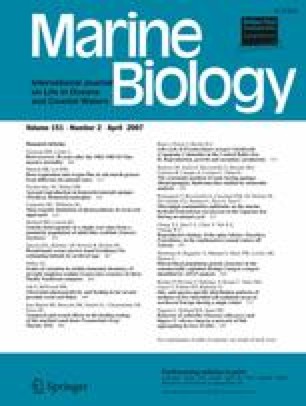 The relative effectiveness of different bands of irradiance to estimate the latitude of archival tags was evaluated. These tags are placed on fishes in order to describe their movements during long distance migrations. Measurements were recorded of broad-band irradiance with and without a cosine collector and narrow-band irradiance of seven narrow bands with 50% attenuation 30 nm on either side of their central wavelength of 400 (violet), 450 (blue), 500 (blue–green), 550 (green), 600 (yellow), 650 (orange), and 700 nm (red). A holographic, cosine collector was used to reduce the vertical transmission of irradiance to the sensor and to increase horizontal transmission of irradiance so the sensor detected more of the diffuse irradiance penetrating the water at dawn and dusk. Daily measurements were made during seven periods of 1–2 days each, beginning 28 June (after 21 June solstice) and ending on 6 October 1999 (after September 23 equinox) of submarine irradiance at 15-s intervals at a fixed depth (10 m) and location (38.31°N; 123.08°W) in Horseshoe Cove, California. Irradiance transmission at this site is intermediate between the clearest offshore waters, where blue irradiance (450 nm) penetrates farther with depth than green irradiance (550 nm) and most oceanic and coastal waters, where green penetrates farther than blue irradiance. Two algorithms were used to estimate latitude, the maximum slope method and the maximum logarithmic difference method. The broad-band, cosine-corrected light, excluding those deployments near the equinox when error is highest, produced an estimate of latitude of 38.30° for both methods and a latitudinal error of ±34.4 km for the former and ±27.2 km for the latter. The mean latitudinal error for non-cosine-collected, broad-band irradiance was ±190.9 km, using the slope algorithm and ±184.8 km using the difference algorithm. The blue band of irradiance, which attenuates least with increasing depth in clear, oceanic water, also produced a comparatively high-latitudinal error of ±163.8 km error for the former algorithm and ±170.4 km for the latter algorithm. Tag designers should consider using cosine-collectors over the irradiance sensors on their archival tags to increase the accuracy of position estimates.

Latitudinal Variance Irradiance Intensity Solar Angle Irradiance Measurement Autumnal Equinox
These keywords were added by machine and not by the authors. This process is experimental and the keywords may be updated as the learning algorithm improves.

This work was supported by a grant to APK by the National Undersea Research Program (NOAA) and the Marine Technology Program of the National Science Foundation. Tagging of Pacific Pelagics (TOPP) with direction from B.Block, kindly paid for the curves of spectral intensity to be reproduced in their corresponding colors. We appreciated the assistance of S. Beavers, T. Curtis, and S. Jorgensen during various phases of the study. We want to thank David Welch, who openly reviewed an earlier version, and four anonymous reviewers, who vastly improved this article. H. Fastenau, T. McCrumman, and K. Menard deployed the radiometer underwater at two-week intervals during the study.

Design and operation of multi-spectral radiometer

We measured the intensities of underwater irradiance with a multi-spectral radiometer designed and fabricated by one of the authors (RN). The device recorded the intensity of irradiance in seven narrow bands of irradiance and two broad bands of light. Peak absorption in the narrow bands was in the following wavelengths, 350, 400, 450, 500, 550, 600, 650, and 700 nm, corresponding to colors in the visible spectrum of ultraviolet, blue, blue green, green, yellow, orange, and red. The energy in the broad bands of light was distributed equally over the seven wavelengths in the visible spectrum, and was either attenuated using neutral density filters (ndn) or cosine-corrected (cos) using an optical diffuser. “Light” is defined as the broad band of wavelengths perceptible by to the human eye.

The radiometer was capable of recording irradiance over the range of 10 log units that occur between local noon and midnight in the absence of moonlight. A heated amplifier (Dawn Electronics, DN120, Charlottown, PE, Canada) converted the linear output of a photocell (Hamamatsu, S1227-1010BQ) resulting from the gradient in the flux of light impinging on the cell into an output, unaffected by the daily temperature fluctuations in the marine environment. The radiometer had a circular disk with nine holes for optical filters and one solid region in a circular configuration that rapidly rotated so that each filter would be above a single photodiode and broad or narrow-band irradiance measurement recorded every 15 s. Seven narrow-band filters (Andover Corp., Salem, NH, USA 110FA40-12.5) were inset in the holes. The disk rotated 360° over ten evenly spaced photodiodes to record ten measurements, one of which was the “dark” current produced in the absence of light. The passage of other wavelengths through the narrow band filters decreased to 50% of the peak wavelength within 15 nm on either side of each transmission peak. A neutral density filter (Andover Corp, 030FN52-1125), reducing transmission by 50%, was placed in the eighth hole; a holographic light diffuser (Physical Optics Corp., LSD, Torrance, CA, USA) in the ninth hole evenly weighted incoming light over an 180° angle. These diffusers enable the transmission of 80–90% of the light impinging on the surface of a sensor over angles ≤90°. The output from the logarithmic amplifier was converted to a digital signal by a 256 A/D converter with 25 bits available for each decade of amplification. The radiometer contained a microprocessor (Microchip Technology Inc., PIC 16C71, Chandler, AZ, USA), which operated on RISC instruction code in EPROM, and stored the irradiance measurements in SRAM. The amount of memory in the unit permitted operation for 27 h, and it was necessary to charge the unit, before redeploying it again. We programmed the unit and downloaded data using a BASIC program.

The output from the radiometers in response to different levels of irradiance was expressed in milliamps recorded per light levels. The output of the photodiode increased linearly with the input of radiant flux in watts in a 1:1 ratio (see “linearity” graph for S1227-1010BQ, Hamamatsu Product Brochure). Hence, we are relatively confident that the change in output of the radiometers was proportional to the change of underwater irradiance. We measured the irradiance change in absolute physical units within the narrow band centered at 550 nm recorded by the multi-spectral radiometer. Irradiance of this wavelength is 120 μW cm−2 s−1 at sea level (Ryer 1988). The output (in current) of the 550-nm channel of the radiometer at a depth of 10 m was 0.27 of its output at the surface at the same time during midday. This provided a reference for the peak daytime underwater irradiance of 550 nm of 32.4 μW cm2 s−1. This value was decreased linearly in a 1:1 ratio relative to the output of the 550-nm channel of the radiometer to describe the dynamic range of irradiance intensity between night and day under water.