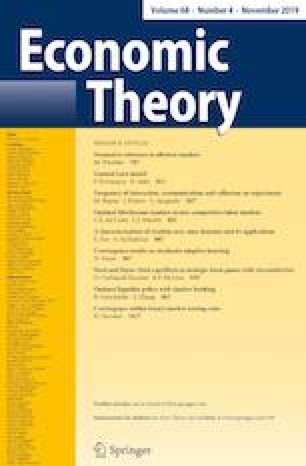 Political selection and the optimal concentration of political power

We study how policy choice and political selection are affected by the concentration of political power. In a setting with inefficient policy gambles, variations in power concentration give rise to a trade-off. On the one hand, power-concentrating institutions allocate more power to the voters’ preferred candidate. On the other hand, they induce the adoption of more overly risky policies and decrease the voters’ capability to select well-suited politicians. We show that full concentration of power is optimal if and only if the conflict of interest between voters and politicians is small. Otherwise, an intermediate level of power concentration is optimal.

We are grateful to Rafael Aigner, Felix Bierbrauer, Paul Heidhues, Martin Hellwig, André Kaiser, Mark Le Quement, Gilat Levy, Désirée Rückert, Dominik Sachs and two anonymous referees for helpful comments. We also benefited from comments at EEA, RES, VFS and ZEW Public Finance conferences and at seminars in Bonn, Cologne, Tübingen, and at the LSE. Financial support from the Bonn Graduate School of Economics is gratefully acknowledged. The second author also gratefully acknowledges financial support by the German Academic Exchange Service and hospitality of the London School of Economics, where part of this research project was conducted. 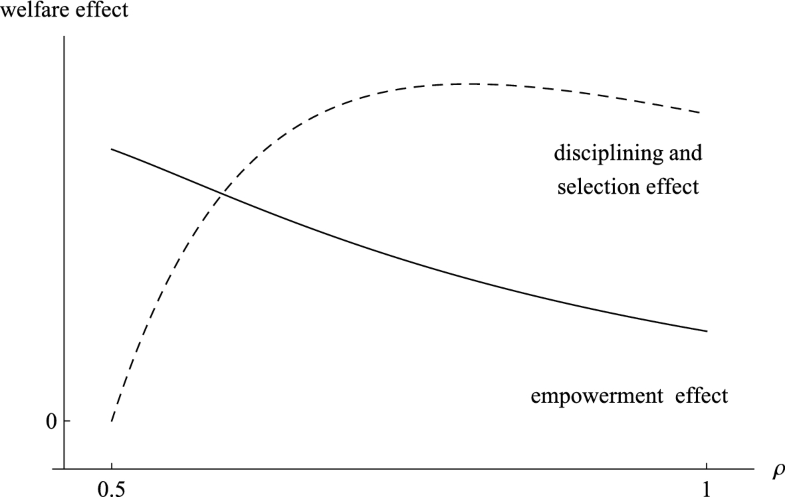 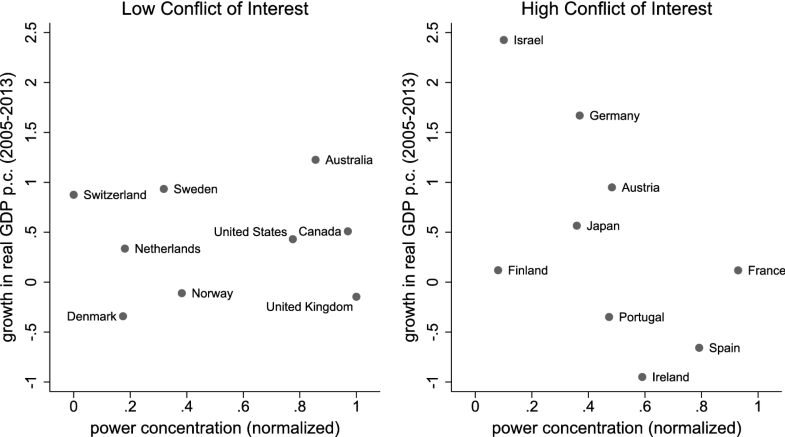 Proofs of Propositions and Lemmas

As shown above, changes in \(\rho \) do influence neither candidate behavior nor the quality of political selection. However, the higher \(\rho \), the higher is the expected power of the winning candidate, i.e., the one whose expected policy payoff is higher. Hence, voter welfare strictly increases with the level of power concentration. \(\square \)

Proof of Proposition 2 and Corollary 1

We prove Proposition 2 and Corollary 1 through a series of Lemmas. Lemma 2 shows that the candidates’ policy preferences satisfy the Gans and Smart (1996) single-crossing property. Lemma 3 characterizes the strategies in any PBE. Lemma 4 identifies equilibria that are robust to D1 and unprejudiced beliefs. Lemma 5 proves the existence of a unique D1 equilibrium, which is symmetric.

Assume that Assumption 1 holds and that \(\theta ^H>\theta ^L>0\). In every PBE, the equilibrium strategy \(X_i^*\) of candidate i satisfies the following properties:

For part (iii), assume without loss of generality that there is an equilibrium with \(\alpha _1^H>\alpha _2^H\). This requires that there is an ability level \(a' \in (\alpha _2^H,\alpha _1^H)\) such that candidate 1 with type \((a',\theta ^H)\) prefers to propose the status quo, while candidate 2 with the same type prefers to propose the reform. At the same time, a reform proposal by candidate 1 must be associated with a higher expected payoff and, hence, a higher conditional winning probability than a reform proposal by candidate 2. We show by contradiction that such a situation is impossible.

First, the unique equilibrium is always of type I for \(\rho =\frac{1}{2}\). In this case, winning and losing the election promises the same amount of power (\(g=0\)), so that even egoistic candidates care only about their legacy payoff. As a consequence, equilibrium condition (8) is satisfied for \(\alpha ^H=c\).

The following figure illustrates for a numerical example how the sizes of the positive empowerment effect and the negative effects (disciplining, selection) on voter welfare change with the concentration of political power \(\rho \) (Fig. 3).

Our model makes novel statements about the welfare effect of power concentration and its dependence on the conflict of interest between voters and politicians. These results give rise to empirically testable predictions under the assumption that real-world institutions have not been chosen optimally (according to our model). This assumption seems plausible if institutional settings and the implied levels of power concentration in the real world differ mainly for historical reasons such as the predominant views at the time of constitutional drafting, the settings in neighboring countries or their colonial heritage.25 Under this assumption, Corollary 2 predicts an interaction between power concentration and the conflict of interest between voters and politicians summarized by the following hypothesis.

Ideally, we would like to test this hypothesis empirically for a large set of countries. Unfortunately, we face a restriction to data availability. A focus on meaningful variations in institutional settings and in politicians’ motivation requires a cross-country analysis, but measures for our key variables are only available for some established democracies. We nevertheless propose an empirical strategy to illustrate the consistency of our model predictions with the data.

The empirical analysis is based on three key variables. The dependent variable is a measure of efficient policies. The two major independent variables are the degree of power concentration within the political system and the conflict of interest between voters and politicians. In this subsection, we present the operationalization of our main empirical model. The analysis is followed by several robustness checks in which we show that our results survive the use of alternative operationalizations.

As a measure for efficient policies, we use growth in real GDP per capita in constant 2005 US $ as provided by the World Bank (2014). It provides a concise and objective measure of developments that bear the potential of welfare improvements. We measure the concentration of power within a political system by Lijphart’s index of the executive-parties dimension (Lijphart 1999). This well-established measure quantifies how easily a single party can take complete control of the government. The index is based on the period 1945–1996 and is available for 36 countries. The conflict of interest between voters and politicians cannot be measured objectively. However, indication for it may come from voter surveys. The International Social Survey Programme includes questions on voters’ opinions about politicians. In its 2004 survey, conducted in 38 countries, it included the item “Most politicians are in politics only for what they can get out of it personally” (ISSP Research Group 2012). Agreement with this statement was coded on a five-point scale. We use mean agreement in a country as our measure for the conflict of interest between voters and politicians.

Data on both indices are available for 20 countries. Of these countries, New Zealand underwent major constitutional changes after 1996. As these changes are not captured by the Lijphart index, we have to exclude New Zealand from the analysis. As our model focuses on established democracies, we require that countries have a Polity IV Constitutional Democracy index (Marshall and Jaggers 2010) of at least 95 in the year 2002. This excludes Venezuela from the sample. The remaining 18 countries are similar with respect to their economic characteristics.26 They are economically highly developed (World Bank) and feature a Human Development Index (HDI) of at least 0.9. None of the exclusions changes the qualitative results of the analysis.

We find no correlation between power concentration and the conflict of interest (Pearson’s correlation coefficient \(\rho =0.199\), \(p=0.428\)). Technically, this means that the analysis will not suffer from multicollinearity and that the hypothesis can be tested by a linear regression model even though the welfare function of our model is nonlinear in power concentration.27

The time-invariant dependent variables require a cross-section analysis. All explanatory variables correspond to 2004 or earlier years. To address potential problems of reversed causality, our explained variable captures growth after 2004. To test whether the welfare effect of power concentration varies with the conflict of interest, we include an interaction term between power concentration and the conflict of interest in the regression. We control for variables that may be correlated with both our explanatory variables and our explained variable. Most notably, past economic performance affects growth (see, e.g., Sala-i-Martin 1994) and may alter voters’ perception of politicians. We hence control for GDP per capita in 2004. Growth is also affected by other variables, such as capital accumulation, school enrollment rates, life expectancy or openness of the economy (see, e.g., Sala-i-Martin 1997). To capture these influences and to keep the number of explanatory variables low, we add past growth in real GDP per capita (from 1991 to 2004) to the regression.

For the analysis of the relationship between power concentration and economic growth, we use the conflict of interest as a continuous explanatory variable in an OLS regression and control for relevant covariates. Table 1 presents the regression results.

Column (a) displays the results of a regression model without interaction term. In this regression, the coefficient of power concentration estimates the effect on economic growth under the assumption that this effect does not depend on the conflict of interest between voters and politicians. We find that this coefficient is insignificant.

We conclude that the data are in line with our model. While the evidence is only suggestive, it indicates that the effect of power-concentrating institutions depends on the specific conditions of a country. The direction and the size of the effect seem to depend on the conflict of interest between voters and politicians, as predicted by our model. Our model delivers a plausible explanation for the pattern in the data: Countries with a small conflict of interest benefit from power concentration as it helps them empower better candidates; countries with a large conflict of interest suffer from power concentration as it induces more inefficient reforms and worse selection of candidates. While the data support our theoretically derived hypothesis, we are unable to test the explanation provided by our model against alternative explanations.
Table 1

Heteroskedasticity–robust standard errors are provided in parentheses. ***, **, * indicate significance at the 1-, 5- and 10-percent level, respectively

The specification used above is parsimonious and may give raise to a concern of omitted variable bias. However, for an omitted variable to bias the coefficient of the interaction effect, it would have to be correlated with the interaction term between power concentration and the conflict of interest, and with growth potential. The most obvious candidate for an omitted variable is general trust among the population. Trust may be correlated with the perception of politicians’ motivation and may reduce opposition toward power concentration. If trust had a nonlinear effect on growth, in addition, the absence of a quadratic trust term would bias the coefficient of the interaction effect between power concentration and the conflict of interest. We control for this possibility and add general trust, as measured by the 2004 ISSP survey,28 as linear and quadratic term to our regression. This does not change our result.

Finally, one might fear that our result is influenced by the financial crisis, which affected output beginning in 2008. To test whether this is the case, we may exclude from the sample the countries that were hit hardest by the financial crisis. The result is robust to the exclusion of any subset of the countries Ireland, Spain and Portugal (all p-values \(<0.085\), \(F>2.53\)).