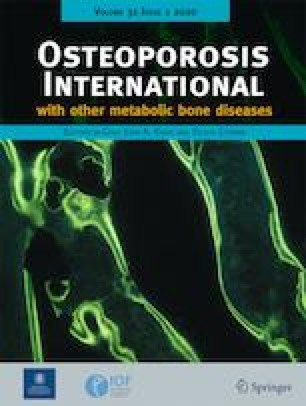 In this population-based study, we compared the incidence of distal radius fracture in 2016 with that in the same region’s adult general population in 2001 using radiographs to identify fracture cases. We showed that the incidence decreased by 24% in 2016 compared with 2001 indicating an important development.

We conducted an epidemiological study on residents of northeastern Skåne in southern Sweden (population 182,000) to determine the overall incidence of distal radius fracture and the incidence according to age, sex, and fracture characteristics in the region’s adult population during 2016, and to study the change in incidence in the same general population between 2001 and 2016 using wrist radiographs to identify fracture cases.

Two orthopedic surgeons examined all wrist radiographs performed at the only two emergency hospitals in the study region to identify individuals, above 18 years of age, who sustained fracture of the distal radius during 2016. We used Poisson regression analysis adjusting for age, sex, and at-risk population to compare the incidence in 2016 with the incidence in 2001, previously estimated using similar methodology.

In a general population in Sweden, a statistically significant and clinically important decrease in the incidence of distal radius fracture occurred between 2001 and 2016, driven by lower incidence in individuals 50 years or older.

In previous studies conducted in Europe, North America, and Asia, the overall incidence rates of distal radius fracture have been shown to increase over time [6, 7, 8]. Other more recent studies have shown no change, or even a decrease, in the incidence [9, 10, 11]. During the last decade, programs for screening and treating osteoporosis have been implemented in health care, potentially affecting the incidence of distal radius fracture. Data about the prescription of osteoporosis medication (oral bisphosphonates) in Skåne County in southern Sweden showed that the number of defined daily dose (DDD), which is the average daily maintenance dose for a drug used for its main indication in adults [12], had more than doubled in women from 4.9 DDD/1000 women in 2000–2002 to 11.1 DDD/1000 women in 2014–2016, and almost quadrupled in men from 0.66 DDD/1000 men to 2.32 DDD/1000 men [13].

The incidence of distal radius fracture has been shown to vary between different geographical areas, with higher incidence in Scandinavia than in other parts of Europe [14] and higher incidence in urban than in rural areas [15]. Because of this variation, the change in incidence over time would ideally be studied in the same population rather than comparing incidence rates across studies. Another difficulty in interpreting the results of previous studies is that most have solely used data from registers to identify fracture cases. Registers might not have high reliability and validity, and the diagnosis of wrist fractures by emergency physicians may lack adequate accuracy [16, 17]. Few epidemiological studies have used radiographs as the gold standard in identifying fracture cases.

We have previously conducted a prospective population-based study in the region of northeastern Skåne in southern Sweden, using radiographs to identify fracture cases, and found that the overall incidence of distal radius fractures in the adult population in 2001 was 26 per 10,000 [18].

This is a population-based study conducted in the region of northeastern Skåne in southern Sweden. We identified all adults who sustained an acute distal radius fracture during the period of January 1 to December 31, 2016. The study region (population 182,000) has two hospitals (Kristianstad Hospital and Hässleholm Hospital), and these are the only health care facilities that manage acute radius fractures. The inclusion criteria for this study were acute fracture of the distal radius and age above 18 years. The exclusion criterion was residence outside the region at the time of fracture, according to the National Population Register. Patients with acute distal radius fracture seek the emergency departments of Kristianstad and Hässleholm Hospitals. These patients are prospectively registered in the department’s register, by an orthopedic specialist or a resident, according to the International Classification of Diseases, Tenth Revision, Clinical Modification (ICD-10-CM) as S52.50, S52.51, S52.60, and S52.61. Our search strategy comprised two steps. In the first step, we conducted a search in our orthopedic department’s patient register, using the ICD codes for distal radius fracture to identify fracture cases that fulfill the eligibility criteria. The radiographs (digital) of the identified fracture cases were examined to verify the diagnosis. In the second step, we examined all wrist radiographs performed for any reason during 2016 in the two hospitals in the study region to identify possible additional cases that might not have been registered in the orthopedic department’s patient register. The second search was done in the radiology department’s electronic database (common for the two hospitals), in which all performed radiographs are stored. We also reviewed the medical records of all the identified cases to ascertain that they fulfill the eligibility criteria. By this methodology, we could identify and verify all eligible cases with distal radius fracture in the study region during 2016. A few potentially eligible patients might not have sought health care (minor fracture) or sought and received treatment at hospitals outside the study region. That would however involve a very small number of patients.

One of the study researchers extracted from the medical records, demographic data including age, sex, fracture side, and fracture date. The anteroposterior and the lateral radiographs were examined by an orthopedic surgeon and a radiologist to confirm the diagnosis, to measure volar angulation and ulnar variance, and to classify the fracture according to the AO classification (type A, extra-articular; type B, partial intra-articular; type C, complete intra-articular). The interrater reliability of the two examiners’ measurements was evaluated with the intraclass correlation coefficient (ICC); ICC (95% confidence interval [CI]) for volar angulation was 0.965 (0.96–0.97), for ulnar variance was 0.866 (0.84–0.89), and for AO classification was 0.80 (0.75–0.83), indicating high reliability. The measures of one examiner were used in the analyses. As in our previous study [18], fractures with volar angulation of − 5 to 20° and/or ulnar variance of up to 1 mm were considered as nondisplaced or minimally displaced, and fractures with greater displacement were considered as displaced.

Incidence of distal radius fracture per 10,000 persons in the adult general population of northeastern Skåne in Sweden during 2016

Incidence (per 10,000 persons) according to fracture type

Incidence (per 10,000 persons) according to fracture displacement

The decrease in the overall fracture incidence in 2016 compared with 2001 was due to a decrease in incidence at age of 50 years or older, while the incidence below 50 years remained almost unchanged. Similar trends have been observed previously in Norway, where the incidence of distal radius fracture in women at the age of 50–59 years in Oslo during a 1-year period in 1998–1999 had fallen markedly compared with 1979 [22]. In Iceland, the incidence in women aged 50–70 years was considerably lower in 2004 than in 1985 [26]. However, we have now shown that this decrease in incidence involves all individuals above the age of 50 years. These findings are important and might indicate the effect of osteoporosis treatment even in old age. Another explanation for the decrease in incidence could be that many elderly remain physically active leading to a better neuromuscular coordination and improved bone mineral density with a lower fracture risk.

Our study has strengths and limitations. To our knowledge, no other studies have investigated the change in incidence of distal radius fracture during the last two decades in a well-defined geographic region using wrist radiographs as gold standard for identifying and verifying fracture cases. Besides, the composition of at-risk population remained unchanged in the study region (Online resource 1) [21].

One limitation is the possibility that an eligible individual may have sustained a minor fracture while being outside the study region and the injury was deemed, at the treating hospital, to not require further follow-up at our orthopedic department. This would probably involve only few cases and would only have minor influence on the incidence estimates. Besides, it would have similarly affected the incidence rates in 2001 and 2016. Thus, it would likely not affect the change in incidence. The incidence of distal radius fracture may be influenced by weather conditions, as lower temperatures increase risk of falls and fractures [28]. However, data about the daily temperatures during 2001 and 2016 in the study region showed that the mean temperature for days when fractures occurred did not differ substantially between the two study years (Online resource 2) [29]. Another limitation is that part of the methodology to identify fracture cases was not exactly the same in our current study and our previous study that estimated the incidence in 2001 [18]. The ICD-10 codes used in 2001 and 2016 were exactly the same, and we searched the department’s patient register for distal radius fractures in both years in a similar fashion. In 2001, we examined the radiographs (non-digital) of all identified cases to verify the fractures, and in addition we searched all ICD-10 codes for forearm fracture and wrist sprain and examined the radiographs of these cases to find any distal radius fracture cases that might have been incorrectly coded. No digital radiographs were available in 2001, and therefore we did not examine all wrist radiographs performed at the two hospitals in 2001 as we did in 2016. However, this would imply possible underestimation of the incidence in 2001 and that the decrease in incidence shown in 2016 may even be larger.

We conclude that the incidence of distal radius fracture has decreased during the last two decades. This is an important development, and a similar trend might be expected in other osteoporosis-related fractures as hip fractures.

Open access funding provided by Lund University. The study was supported by an internal research grant from Region Skåne (FoU research grant). There was no source of external funding for this study.

The study was approved by the Ethical Review Board of Lund University.

Open Access This article is licensed under a Creative Commons Attribution-NonCommercial 4.0 International License, which permits any non-commercial use, sharing, adaptation, distribution and reproduction in any medium or format, as long as you give appropriate credit to the original author(s) and the source, provide a link to the Creative Commons licence, and indicate if changes were made. The images or other third party material in this article are included in the article's Creative Commons licence, unless indicated otherwise in a credit line to the material. If material is not included in the article's Creative Commons licence and your intended use is not permitted by statutory regulation or exceeds the permitted use, you will need to obtain permission directly from the copyright holder. To view a copy of this licence, visit http://creativecommons.org/licenses/by-nc/4.0/.