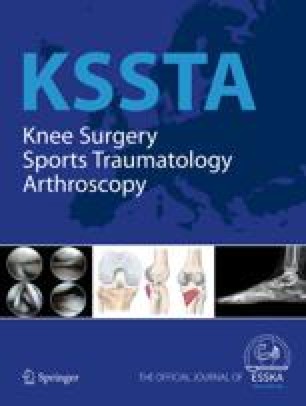 Numerous surgical procedures have been developed and used for anterior cruciate ligament (ACL) reconstruction. Patellar tendon is probably the most common graft used, but gracilis and semitendinous tendons present some interesting advantages: small incision, large graft when doubled, characteristics close to ACL, rapid harvest. We describe a combined intra- and extra-articular arthroscopic ACL reconstruction using hamstring tendons which includes some original steps. The tendons are harvested, leaving the distal insertion intact, and sutured together. After drilling of the tibial tunnel, an over-the-top arrangement is formed, creating a groove in the posterolateral aspect of the femur. The tendons are then fixed with double staples in the groove, and their remaining part is fixed distally to Gerdy’s tubercle passing under the fascia, but over the lateral collateral ligament (LCL). This technique ensures sufficient strength in the graft and permits correction of any associated instability, because of the presence of the extra-articular portion of the tendons. Furthermore, the over-the-top arrangement reduces trauma and possible pitfalls related to tunnel construction and permits isometry of the extra-articular portion to be established. Forty patients involved in sports activity were prospectively selected and evaluated at a minimum 2 years’ follow-up. IKDC score and Lysholm score were used for clinical evaluation, and the KT-2000 was used for instrumental laxity measurements. Resumption of sport and time to that point were recorded as well as Tegner activity score. We had 92.5% normal and fairly normal knees according to IKDC score and only 7.5% abnormal knees. Mean Lysholm score was 95. Mean Tegner score was 7.2. KT-2000 showed a mean injured/uninjured difference of 2.1 mm. In all, 90% of patients resumed sports at the same level, 67.5% in 3–4 months and 27.5% in 4–6 months. The highly satisfactory results of this series with no major complications confirm the reliability of this techinque and the possibility of guaranteeing functional behaviour in the knee.