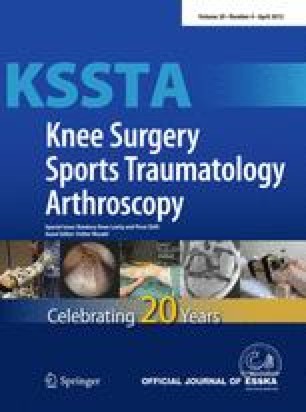 The purposes of the study were to evaluate and to quantify the pivot shift phenomenon by using a small and easy to handle measuring device for pivot shift quantification.

Twenty patients (forty knees) with primary torn anterior cruciate ligaments (ACL) were tested under anesthesia, graded by the examiner and by the device according to the IKDC classification [normal (0), glide (1), clunk (2), and gross (3)]. For the grading by the device, a femoral and a tibial miniature inertial sensor measured the acceleration and the angular velocities. Three parameters were used for pivot shift identification and quantification: (1) difference between the positive and negative acceleration peak value (a diff), (2) the maximum jerk (j max), and (3) the standard deviation (SD a ) of the acceleration. The ratio between the ACL-deficient and the intact knees was calculated in order to normalize the data.

The raw signals underwent some pre-processing before the core analysis started. During pre-processing, the values for acceleration and angular velocity were multiplied with correction matrices to improve the accuracy of the measurements. The signals ran through a finite impulse response (FIR) low-pass filter with a 10 Hz cutoff frequency to clear the signal from noise and other artifacts.