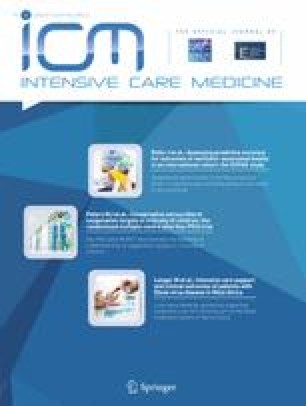 Lung point in the absence of pneumothorax

Given a reported 100% specificity for the diagnosis of pneumothorax, the lung point has been considered a sign that cannot be mimicked. However, we now present a unique case of the presence of lung point in the absence of pneumothorax in a 75-year-old man admitted after coronary artery bypass graft (Fig. 1).

Scanning at the right anterior third intercostal space showed absence of lung sliding (online video A), A-line and stratosphere sign indicating an A′-profile. Thus, a lung point was actively searched for and indeed found. Pneumothorax was ruled out by the presence of a B-line in the same view as the lung point (online video B), a post-operative chest X-ray and CT scan which indicated the pre-existence of asbestos-related pleural disease (Fig. 1a, c, d). We postulate that the healthy part of the lung moves unrestrictedly whereas the affected part is restricted, their transition resulting in a lung point. Another situation where lung point may be false positive is a ‘bleb’ point in bullous lung disease.

In conclusion, absent lung sliding and lung point can be observed in cases of pleural thickening and adhesion and may thus warrant revision of the perception that lung point is pathognomonic for pneumothorax.

TSS, BH, PWGE and PRT contributed substantially to the study design and the writing of the manuscript.

The commission for medical ethics (METc) of VUmc has approved this research: METC: 2016.053.

Written informed consent was given by the patient.

The authors declare they have no conflict of interest relevant to this manuscript.

Open AccessThis article is distributed under the terms of the Creative Commons Attribution-NonCommercial 4.0 International License (http://creativecommons.org/licenses/by-nc/4.0/), which permits any noncommercial use, distribution, and reproduction in any medium, provided you give appropriate credit to the original author(s) and the source, provide a link to the Creative Commons license, and indicate if changes were made.