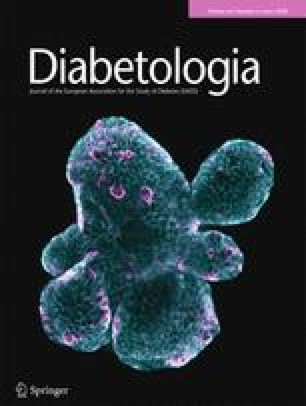 Aims/hypothesis. N ɛ-(carboxymethyl)lysine (CML) is one of the end products of protein glycoxidation and its accumulation is associated with diabetes complications. Since CML-modified proteins are immunogenic, we have investigated the presence of anti-CML antibodies in diabetic patients.¶Methods. Antibodies against CML-modified human serum albumin (HSA) were measured by direct enzyme-linked immunosorbent assay in the sera from 289 non-selected diabetic and in 120 healthy control subjects.¶Results. Immunoglobulin-G reactivity towards CML-HSA was significantly higher in diabetic than in control sera. The presence of anti-CML IgG in diabetics, however, was not influenced by age, duration of disease or glycaemic control. Analysis of distribution frequency revealed that anti-CML IgG in both control and diabetic subjects were not normally distributed and that the distribution curves were similar in the two groups. Moreover, only 14 % of the diabetic subjects displayed antibody binding to CML-HSA above 95 centile in the control cohort. Competition experiments confirmed that the IgG detected in both control and diabetic groups were specific for CML epitopes and did not recognise glycated-HSA in which CML formation was inhibited.¶Conclusion/interpretation. The presence of anti-CML IgG in diabetic sera is probably not related to the development of an immune response against protein glycoxidation products. [Diabetologia (2000) 43: 1385–1388]