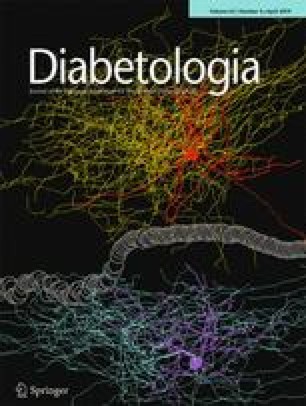 Effect of duration and burden of microvascular complications on mortality rate in type 1 diabetes: an observational clinical cohort study

Neuropathy and diabetic kidney disease are strong and independent risk markers of mortality in type 1 diabetes, whereas no evidence of higher mortality rate was found for retinopathy. We found no indication that the mortality risk with multiple complications exceeds the risk conferred by each complication separately. The duration spent with microvascular complications had only a marginal effect on mortality.

The online version of this article ( https://doi.org/10.1007/s00125-019-4812-6) contains peer-reviewed but unedited supplementary material, which is available to authorised users.

This clinical cohort consisted of individuals with type 1 diabetes from the Steno Diabetes Center Copenhagen. Data was extracted from electronic patient records (EPR) and the Danish Register of Causes of Death [14]. These data sources were linked for the period 2001–2013 through personal identification numbers in the Danish Civil Registration System [15].

Type 1 diabetes was defined based on the epidemiological phenotype requirements as implemented in the Danish National Quality database: age under 30 years at diagnosis and glucose management with insulin treatment at diagnosis. Individuals aged 30 years or above at diagnosis with randomly obtained non-fasting low C-peptide values (according to laboratory-specific reference values) or glutamic acid decarboxylase (GAD) 65 antibody positivity, both in combination with a need for insulin to control blood glucose concentrations, were also classified as having type 1 diabetes.

Study participants were included at the first date on which they had a clinical examination of diabetic kidney disease, retinopathy, and neuropathy registered in the EPR. If the date of the first registration for diabetic kidney disease, retinopathy and neuropathy differed, the latest screening date for any of the microvascular complications was used as the inclusion date. Included individuals were followed until emigration, the censoring date of 30 September 2013 (end of study period) or death. Individuals without an examination of any of the microvascular complications were excluded from the study.

The presented data collection was approved by the Danish Data Protection Agency (J. No.: 2007-58-0015 and 2012-58-0009). According to Danish law, anonymised analyses of databases do not require informed consent.

Study variables and definitions of complications

The outcome of the present study was death from any cause. Information on date of birth, immigrant status (first- or second-generation immigrant), diagnosis of diabetes and microvascular complications was available in the EPR. We also obtained information on self-reported lifestyle habits (alcohol consumption, smoking and physical activity habits), BMI, estimated glomerular filtration rate (eGFR), blood pressure, and biochemistry laboratory information on HbA1c, serum creatinine, HDL- and LDL-cholesterol, total cholesterol and triacylglycerol, at clinical visits. We also had information on prescription of antihypertensive medication and lipid-lowering medication.

Data on diabetic kidney disease, retinopathy and neuropathy was also obtained from the EPR. Diabetic kidney disease was assessed every 3–4 months. The definition of diabetic kidney disease included both eGFR under 60 ml min−1 [1.73 m]−2 and urinary albumin/creatinine ratio (UACR) exceeding 3.5 mg/mmol in a spot urine or albumin excretion >30 mg/24 h in two urine specimens within the previous 12 months. Neuropathy was assessed annually with a biothesiometer and graded according to published age-specific thresholds [16] to classify any peripheral neuropathy defined by bilateral abnormal sensory modalities on the big toes. Retinal images were obtained annually or every other year (depending on previous status) and graded by a trained nurse or, if necessary, a medical specialist, according to the Early Treatment Diabetic Retinopathy Study (ETDRS) scale [17]. Retinopathy was defined as at least moderate non-proliferative changes in either eye.

Clinical characteristics of individuals at entry are presented as medians (25th percentile, 75th percentile) for continuous variables or as frequencies and proportions for categorical variables.

In the present study, we modelled occurrence rates; the likelihood function for this type of observation is (proportional to) a Poisson likelihood. Follow-up time was split into 6 month intervals and each interval was assigned the value of the covariates age, time since diagnosis of type 1 diabetes, time since complication onset, the response variables status at the end of the interval (censoring or event type) and length of the interval (risk time). The modelling of mortality rates was done by Poisson models using mortality as outcome and the log of the risk time as offset, modelling the effect of the timescales (age, diabetes duration and time since diagnosis of microvascular complications) as smooth functions using natural splines (and adjusting for baseline levels of other covariates) [12]. The logarithmic transformation was based on the natural logarithm (loge). We tested for interactions by sex. We considered three different model structures: structure I included only the number of microvascular complications (0–3 complications); structure II included main effects of complication type without interactions; and structure III used a separate variable for each of the eight possible complication states. Likelihood ratio tests were used to compare models and select the most parsimonious model structure for subsequent analysis.

Statistical analyses were performed in R, version 3.3.3 (R Foundation for Statistical Computing, Vienna, Austria; www.R-project.org) using the mitml package, the mitools package, and the Epi package for the definition of the multi-state model [12, 19].

The total population comprised 5031 individuals with type 1 diabetes. Individuals without assessment of diabetic kidney disease, neuropathy or retinopathy were excluded, leaving 3828 individuals for analysis with a total follow-up time of 26,665 person-years. ESM Table 1 shows descriptive characteristics of included and excluded individuals at first assessment in the study period. The age- and sex-adjusted morality rates in included and excluded individuals are similar (data not shown, but as an example, the mortality rate per 1000 person-years for an excluded 50-year-old woman was 14 (95% CI 12, 17), whilst for an included woman of the same age it was 12 (95% CI 11, 14); p = 0.08).

aDefined as first- or second-generation immigrant

Estimates for multiple complications are extracted from the model by multiplication of the effect from each complication separately. Logarithmic transformation is based on the natural logarithm (loge). Calculations are based on exact numbers, resulting in minor rounding errors

Large clinical trials have shown that intensive control of blood glucose lowers mortality risk in individuals with type 1 diabetes [6, 7, 20]. However, even with glycaemic levels near those recommended, an increased mortality risk remains [8, 9]. Our study is unique in that we assessed both the separate risk and the combined mortality risk associated with all three microvascular complications, while taking duration since diagnosis of complications into account. Although we did not find evidence for a statistical interaction between the microvascular complications, this does not mean that a biological interaction does not exist.

We showed a clear association between diabetic neuropathy and mortality in type 1 diabetes. Few other studies have reported on mortality rates in individuals with type 1 diabetes and peripheral neuropathy [10, 20] and those that do show discrepant results. The explanation for these differences remains elusive, but it could be related to the diversity in the criteria for the definition of neuropathy. First, clinical trials often include symptoms in the definition of neuropathy [10, 24], whereas our criterion is solely based on an abnormal biothesiometry measure, which may classify more individuals as having neuropathy. However, despite our more inclusive definition, the impact of this complication on mortality rates in type 1 diabetes is clear. Second, glycaemic control, a strong determinant of both neuropathy and mortality, was suboptimal in our cohort. We adjusted for a wide range of potential confounders but we cannot exclude the possibility of residual confounding. Our results suggest that neuropathy should be considered a clear risk factor for mortality in type 1 diabetes, and that the mortality risk increases immediately after diagnosis.

Retinopathy did not appear to be associated with mortality risk in type 1 diabetes. Based on the literature, we would have expected to find a higher mortality rate in the individuals with type 1 diabetes and retinopathy compared with individuals without this complication [25, 26, 27]. In a previous study, we found retinopathy to be predictive of the occurrence of diabetic kidney disease and neuropathy in type 1 diabetes [28]. Since previous studies in this field did not examine multiple complications, many of their participants with retinopathy will also have had neuropathy and/or diabetic kidney disease. Although this approach is valid, the effects of the different complications are likely to have been combined under the retinopathy label and, thus, may have led to inaccurate conclusions. Our multi-state analytical design allows for more thorough separation of the effects of different complications. However, it should be noted that, in our study individuals with any given complication could have subclinical levels of other complications. Other studies have found an association between proliferative retinopathy and mortality risk [29, 30]. An even stricter definition of retinopathy might have enabled us to support these findings; however, such detailed information was not available in the dataset at hand.

The cohort used is clinic-based and all events were properly accounted for because of highly structured protocols for regular clinical examinations. Moreover, all deaths in our study population were recorded in the Danish registration system. This implies that the follow-up data for all complication states and outcome (death) was practically complete. The duration effect was less precisely estimated in individuals with complications at entry in the study. We imputed 60 datasets to optimise our estimates for the effects of complication duration on mortality rates. This approach ensured maximal use of the available observation time. The sensitivity analysis including only individuals without complications showed that this approach introduced very limited bias but increased the power of the study. A major advantage of the Poisson models with smooth parametric effects is that we could adequately deal with multiple-related time scales, such as age, calendar time, duration of diabetes and duration spent with complication(s). It is normal practice for individuals with type 1 diabetes in Denmark to attend a tertiary care centre, which limits the risk of referral bias in our study. Our results are generalisable and highly relevant to other countries with similar healthcare systems.

Our study focuses on all-cause mortality rather than on cause-specific mortality. We chose this approach because the excess mortality seen in type 1 diabetes is not solely explained by higher mortality from CVD [31] or acute complications (i.e. ketoacidosis or hypoglycaemia). Furthermore, routine certification of causes of death is subject to heterogeneous sources of error [32], which do not affect all-cause mortality. Microvascular complications might lead to increased risk of CVD, which in turn could mediate the higher mortality rate associated with microvascular complications. In the current study, we adjusted only for baseline status of CVD. However, the role of CVD on mortality rate in type 1 diabetes during follow-up should be further investigated in future studies.

LB, MC and AH declare no duality of interest relevant to their contribution to this work. DRW, BC and MEJ own shares in Novo Nordisk A/S. MEJ has received research funding from AstraZeneca and Amgen AB.