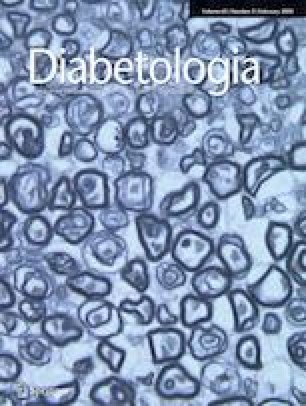 Oral butyrate does not affect innate immunity and islet autoimmunity in individuals with longstanding type 1 diabetes: a randomised controlled trial

The pathophysiology of type 1 diabetes has been linked to altered gut microbiota and more specifically to a shortage of intestinal production of the short-chain fatty acid (SCFA) butyrate, which may play key roles in maintaining intestinal epithelial integrity and in human and gut microbial metabolism. Butyrate supplementation can protect against autoimmune diabetes in mouse models. We thus set out to study the effect of oral butyrate vs placebo on glucose regulation and immune variables in human participants with longstanding type 1 diabetes.

We administered a daily oral dose of 4 g sodium butyrate or placebo for 1 month to 30 individuals with longstanding type 1 diabetes, without comorbidity or medication use, in a randomised (1:1), controlled, double-blind crossover trial, with a washout period of 1 month in between. Participants were randomly allocated to the ‘oral sodium butyrate capsules first’ or ‘oral placebo capsules first’ study arm in blocks of five. The clinical investigator received blinded medication from the clinical trial pharmacy. All participants, people doing measurements or examinations, or people assessing the outcomes were blinded to group assignment. The primary outcome was a change in the innate immune phenotype (monocyte subsets and in vitro cytokine production). Secondary outcomes were changes in blood markers of islet autoimmunity (cell counts, lymphocyte stimulation indices and CD8 quantum dot assays), glucose and lipid metabolism, beta cell function (by mixed-meal test), gut microbiota and faecal SCFA. The data was collected at the Amsterdam University Medical Centers.

All 30 participants were analysed. Faecal butyrate and propionate levels were significantly affected by oral butyrate supplementation and butyrate treatment was safe. However, this modulation of intestinal SCFAs did not result in any significant changes in adaptive or innate immunity, or in any of the other outcome variables. In our discussion, we elaborate on this important discrepancy with previous animal work.

The study was funded by a Le Ducq consortium grant, a CVON grant, a personal ZONMW-VIDI grant and a Dutch Heart Foundation grant.

The online version of this article ( https://doi.org/10.1007/s00125-019-05073-8) contains peer-reviewed but unedited supplementary material, which is available to authorised users.

PFdeG, FH, JBLH, BOR and MNi designed the study. SS substantially contributed to the acquisition of data. PFdeG, BOR, MNe, ESGS, FMK, DHvR, TN, SB, GD, HH, MW, BH, JK, EMK, JHML, SI, EL, GMD-T, MD, FAvH, RB and AB contributed to the analysis and/or interpretation of data. PFdeG, BOR and MNi drafted the manuscript. All authors critically revised the manuscript. All authors gave their approval of the final (published) version of the manuscript. All authors agree to be accountable for all aspects of the work in ensuring that questions related to the accuracy or integrity of any part of the work are appropriately investigated and resolved. PFdeG is the guarantor of this work and, as such, had full access to all the data in the study and takes responsibility for the integrity of the data and the accuracy of the data analysis.

The authors declare that there is no duality of interest associated with this manuscript.