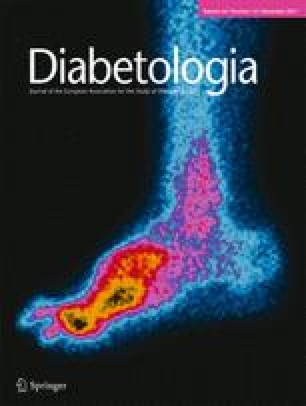 To describe the associations between age, sex and BMI at diagnosis of type 2 diabetes, and test the hypothesis that men are diagnosed with diabetes at lower average BMI than women of similar age.

Linear regression was used to estimate and compare the relationship between age and BMI at diagnosis among 51,920 men and 43,137 women included in a population-based diabetes register in Scotland for whom an index BMI measurement was taken within 1 year of diabetes diagnosis. We also examined HbA1c values by sex within the same timescale.

Men are diagnosed with type 2 diabetes at lower BMI than women across the age range. This observation may help explain why type 2 diabetes is more common among middle-aged men in populations of European extraction. Whether the same pattern is also observed in other ethnic groups requires confirmation.

The online version of this article (doi: 10.1007/s00125-011-2313-3) contains a peer-reviewed but unedited list of additional collaborators, which is available to authorised users.

Greater adiposity is the major risk factor for development of type 2 diabetes. However, as multiple factors including age and genetics (captured in part via family history) influence risk of type 2 diabetes there is a range of body mass at diagnosis. Hillier and Pedula [1] have previously reported an inverse linear relationship between body mass and mean age at diagnosis, indicating that, in general, young people who develop type 2 diabetes have higher body mass indices at diagnoses than do older people.

More recently, it has become apparent that middle-aged men are at significantly higher risk of diabetes than women in several different populations [2, 3, 4]. One possible explanation for this observation is that men, on average, may have to gain less weight to develop type 2 diabetes mellitus than women, in part because men without diabetes are generally more insulin resistant than women [5]. Thus, we hypothesised that men may develop diabetes at lower average BMI across the age spectrum.

Data were drawn from a 2008 extract of the Scottish Care Information Diabetes Collaboration (SCI-DC) dataset, a population-based register holding clinical and demographic data on people diagnosed with diabetes in Scotland. Generation of a linked dataset of SCI-DC data to other health data was approved by the SCI-DC steering committee, the Scottish multi-centre research ethics committee, the Privacy Advisory Committee of NHS National Services Scotland (NHS NSS) and Caldicott guardians of all Health Boards in Scotland. The research database held no identifiable information. Individuals included in this analysis were those with recorded type 2 diabetes for whom BMI was recorded within 1 year of diagnosis of diabetes (index BMI). BMI was determined in all centres by clinical staff using height and weight determinations.

Patients for whom the index BMI measurement was recorded after 31 December 2007 were excluded, as were those whose died within the first 2 years of diagnosis of diabetes, those with an index BMI <25 kg/m2, age <30 years (both factors to limit inclusion of those potentially misclassified with type 1 diabetes), or where the smoking status was not recorded. Other relevant variables (HbA1c and smoking status) recorded within 1 year after diagnosis of diabetes were also extracted. HbA1c was measured by routine NHS clinical laboratories, all with DCCT-aligned methodologies. Where multiple measurements were recorded within 1 year after diabetes diagnosis, the chronologically earliest was used.

The association of interest was estimated for each sex using linear regression (BMI predicted by age at diagnosis), and we modelled the slopes separately for each sex. No transformations were applied to the data prior to analysis. The influence of smoking status on BMI was assessed by extending the original regression model (in which BMI was predicted by age) to include an additional predictor of smoking status (binary: current/former smoker vs never smoked). A value of p < 0.05 was considered significant, and 95% confidence limits for variable estimation are given. Analysis was performed using SAS software (version 9.2).

Characteristics of the population are presented in Table 1. The relationship between BMI and age at diagnosis of type 2 diabetes was based on data from 95,057 individuals (51,920 men; 43,137 women). This sample represents 35.1% of eligible people because BMI or other relevant data were missing for 64.9%. Of importance, the percentage of women in those included versus excluded in this analysis was similar at 45.4% and 46.6% respectively.
Table 1

bWithin 1 year of diagnosis with diabetes

We found no marked effect or confounding by smoking as, essentially, the slope estimates were unchanged for men and negligibly altered for women to −0.178 from −0.177 kg m−2 year−1 when smoking was added.

Results from this population-based diabetes cohort of over 95,000 people confirms an inverse association between BMI and age at diagnosis of type 2 diabetes, substantially extending a previous report based on data for 2,437 adults [1]. We show that this relationship varies by sex, so that at most ages men have lower BMI around the time of diagnosis of diabetes than women, although the sex differential decreases with age. Importantly, there is no evidence that men are diagnosed earlier in the course of their diabetes: earliest HbA1c levels after diagnosis were broadly similar in men and women. Our findings provide an explanation of why, despite higher prevalence of obesity in women, prevalence of diabetes in middle-aged men appears to exceed that of women in some parts of the world [2, 3, 4], although further studies in other ethnic groups are needed.

Potential mechanisms for this observation include the fact that, for a given BMI, men are less insulin sensitive than women [5]. Middle-aged men generally have higher fasting glucose levels, higher triacylglycerol and lower HDL-cholesterol levels than women of a similar age even after adjusting for BMI [4, 6]. Fat distribution differs by sex and, in general, men have greater visceral and hepatic fat compared with women [5]. Women have greater amounts of ‘safe’ subcutaneous fat than men and thus the present observations are consistent with the hypothesis that women need to accumulate greater total adiposity to develop harmful ectopic fat deposition and produce the extent of insulin resistance required to develop diabetes.

The mechanism(s) behind a narrowing of the BMI difference at diagnosis between sexes with advancing age requires further study but speculatively could include factors such as survival bias, hormonal changes (possibly post-menopausal changes, although there is no obvious point of inflection) or differential changes in lifestyle behaviours.

Potential clinical ramifications of the findings merit brief discussion. Lovejoy and Sainsbury [7] point out that research is urgently needed to determine whether current weight loss programmes, largely developed and tested on women, are appropriate for men. Intensive lifestyle intervention appears equally effective in men and women participating in diabetes prevention trials [8]. However significantly fewer men volunteer for such trials and less than one-third of the participants in the Diabetes Prevention Programme were men [8], the same being true in other major trials. Of further interest, future bariatric surgery guidelines developed for patients with diabetes may need to take account of higher diabetes risk at any given BMI in middle-aged men versus women.

Our study is limited by the fact that the population studied was mainly of white European ancestry and further corroborative work is needed in other ethnic groups. We also lacked waist circumference measurements (which enhance prediction of diabetes in women but not men [9]), and consequently whether waist circumference has to increase more in women versus men to convert to diabetes requires further study. Finally, our study employed strict inclusion criteria and required BMI to be available within a year of diagnosis. Thus many patients did not have sufficient data. Nevertheless, the comparisons of those included versus excluded in terms of similar percentage of females, and similar age differential by sex suggests that our exclusions are unlikely to have biased the relationship seen in Fig. 1 based on results from over 95,000 individuals. Moreover, recent results generated in two populations of older men and women recruited from multiple towns in UK have provided broadly concurrent results, albeit from a smaller (n = 7,529) study using data from those with and without established diabetes [10]. In this latter study, waist circumference and BMI levels, along with related risk factors, differed significantly more between diabetic and non-diabetic women than between diabetic and non-diabetic men, suggesting once again that women may need to undergo much larger metabolic perturbances (driven in part or largely by greater weight gain) to transit from non-diabetes to diabetes [10]. Clearly, further mechanistic studies are needed to confirm or refute this hypothesis.

In summary, we confirm an inverse relationship between age and BMI at diagnosis of diabetes, but, importantly, extend existing knowledge to show that men across the age spectrum are diagnosed with diabetes at a lower BMI than women. This novel observation could explain the higher male prevalence of type 2 diabetes in populations of European extraction.

JL, JW, SW and NS conceived the study. All authors contributed to data interpretation and article revision, and all gave final approval of the version to be published.

The authors declare that there is no duality of interest associated with this manuscript.